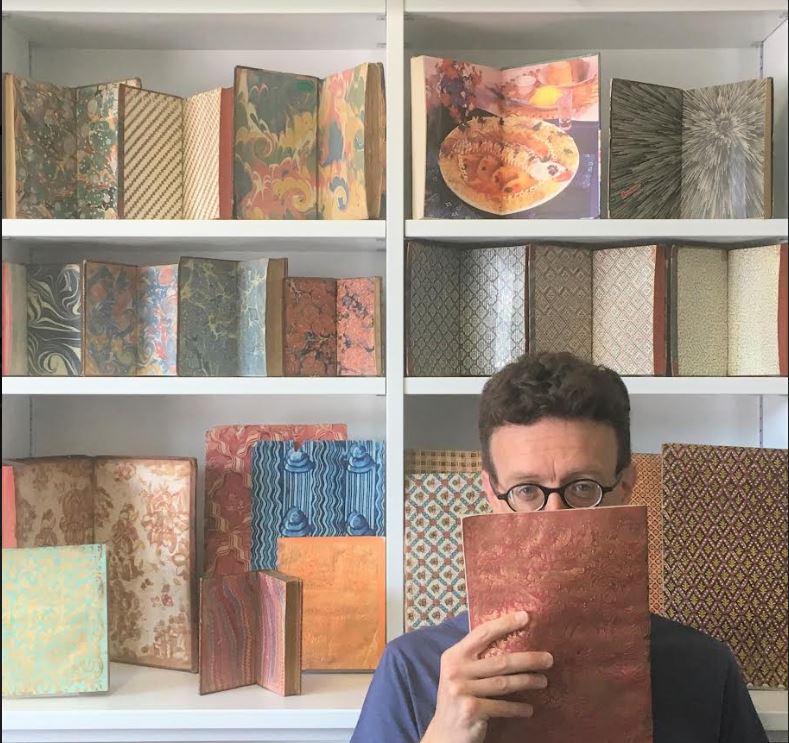 God forgive, I recently broke my own first commandment of book collecting: Thou shalt not buy a book but for its contents! Well, I did—worse, I bought a book for... its endpapers! It is not my entire fault, though. For the past few months, I have joined an apparently misleading group of weird worshippers. Their den? A Facebook group. They war cry? We Love Endpapers!

The book in question is entitled Exhortations Courtes et Pathétiques pour les personnes affligées ou mourantes... It was written by Abbot Martin, and published in Paris in 1712. This is a typical Catholic book, meant to add remorse to the pains suffered by dying people. If Jesus died on the cross for you, then why should you complain when you are sick and suffering? How ungrateful! Good Christians had to endure their tribulations with patience—it was God’s will, indeed. But it was more than that. In a time when medicine was unable to kill the pain, it was also a way to face life with dignity—for yourself but also for society at large. This is a serious book, in fact. The copy I bought has a top quality binding “à la Duseuil”, and... wonderful endpapers (see picture)! The background is a pale matte green, and it is decorated with embossed golden signs and silhouettes. When you open the cover, the light slowly runs on the golden parts that suddenly seem to come to life. Oh boy... I couldn’t wait to show my “golden calf” to the community of endpapers worshippers I had just joined: the We Love Endpapers group on Facebook.

Simon Beattie, who launched the group, told me more about these “embossed”, or “brocade”, endpapers: “Brocade paper first appears in southern Germany at the beginning of the 18th century,” he said, “and was soon being exported throughout Europe. The 'Dutch gilt paper' you see on English bindings is so called because it was imported from the Netherlands, but it was actually being produced in Germany.” I was impressed, and I decided to learn more about this aspect of old books. Interview of an “old paper scientist”.

- Simon, can you please introduce yourself?

My name is Simon Beattie, and I have been a bookseller for 20 years this summer. I worked in London for Bernard Quaritch and Simon Finch Rare Books before setting up on my own in January 2010. You can read more about my background, and the business at https://www.finebooksmagazine.com/fine_books_blog/2012/04/bright-young-things-simon-beattie.phtml

- When did you launch the We Love Endpapers group on Facebook?

Two years ago now, in May 2016. My only motive was that I know various people in the rare book world who say “those are nice endpapers”, or “look at these” at a book fair or wherever when they come across something particularly striking. The colours are so vivid. Think of those wonderful patterned papers inside the covers of an 18th-century book: exactly because they are inside the book, the colours are still as fresh as when they were made over 200 years ago. I thought a Facebook group would be a good forum for people to share pictures of attractive endpapers as and when they come across them. Initially, I intended it to be just for bookseller and librarian friends of mine. However, I then thought others might also be interested in it. Some people post more than others, of course, but I hope members of the group like what they see, and maybe even learn something, too, in the process. I certainly get a lot of nice comments from people at book fairs, thanking me for setting it up and saying that it's their favourite Facebook group, which is very heartening!

- What is the most accurate definition of "endpapers"?

Endpapers are the double leaves added at the front and back of a book by the binder; the outer leaf of each is pasted to the inner surface of the cover (hence 'pastedown'), the inner leaves (or 'free endpapers') form the first and last leaf of the volume when bound.

- When did the first endpapers appear in bookbinding?

Books from the Middle Ages to the Renaissance sometimes had only a pastedown, a narrow strip (or guard) covering the bands on the spine, and sometimes no endpapers at all.

- Was there a specific period of time when they developed?

Endpapers had become pretty much standard practice by the 17th century, and this is also when decorative papers (e.g. marbled) first appear. Brocade papers, and block-printed papers, develop during the 18th century, although I think of them as Continental taste as far as endpapers are concerned.

- Do you know if some printers or binders printed their own endpapers? There were a lot of regulations regarding printing, binding, etc. Was it the case with endpapers?

- Binders would have made their own paste papers, using up paste left over from binding. Brocade and block-printed papers were made by specific manufacturers, such as those in Augsburg, or Orléans, and can be identified. I'm not sure of regulations regarding printed papers. I expect the French dominotiers had regulations, but probably completely different rules from printers of books.

- Most of them from the 18th century are red, blue and yellow. Any particular reason?

Do you think so? You see all kinds of colours.

- When did the first "luxury" endpapers appear?

All decorated papers are, in their way, echoing luxury materials: marble, brocade, chintz (cf. Kattunpapier, literally 'calico paper', the old German term for block-printed paper). Of course, many books of, say, the 17th and 18th centuries have plain endpapers. But when you see a decorated one, you know that the owner of the book has decided to spend a little more on the binding.

- Is there a difference between endpapers and wrappers?

The simple plain paper wrappers put on the book by the printer/publisher were usually removed when the book was bound. You do sometimes see decorated papers used as wrappers on books, e.g. the block-printed papiers dominotés on some 18th-century French books. Interestingly, such block-printed papers were popular in France as wrappers, but rarely used as endpapers, which was more of a German practice.

- What can endpapers tell us about a book?

If the endpapers are made from a fancier paper, it tells you whoever had it bound spent more money on it than if s/he had had plain endpapers. And knowing what kind of paper was made where can help identify perhaps where a book was bound, or serve as witness to the export of decorative papers. Some designs in the 18th century, like those block-printed zigzags, I have only ever seen in Russian books, so I presume they were made in Russia, rather than elsewhere and imported.

Only inadvertently, when you see the edge of, say, a French papier dominoté, or a German Brokatpapier, which gives the name of the manufacturer.