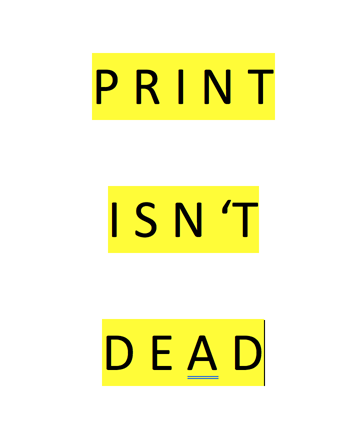 Reading primarily from printed forms, as a fundamental skill to engage with the world, seems to be under some pressure.  The issue isn’t that people can’t read.  Rather it’s that the forms of reading material are changing thereby reducing one’s natural relationship to the printed word.  It seems we are moving on into, to some extent, a not-printed world.  If your career depends on the continuing ascendancy of the printed word you are probably already experiencing some head wind.

But it turns out the printed word offers significant advantages over its electronic cousin, the tweet, email and downloadable text because words, once printed cannot be easily changed.  I know this first hand because, if I make an error in an online story, I can easily correct it.  When printed, it is oh-so-much-tougher as I also know first-hand.

My first significant business was publishing the Orange County Free Press, a controlled circulation weekly newspaper that covered northern Orange County, New York in the early 1970’s.  We published Monday evenings and mailed through the post office at around 2:00 am Tuesday.  On one fateful Monday night we went to press with a serious error on the front page and needed to scrap the run and start over.  That hurt because we had to pay twice for the run, some 34,000 copies.

The internet’s infinite eraser is so much better.  Unfortunately, it is one of the reasons that print is limping, and in time, perhaps dying.

This said, print is sturdier and it turns out, more believable.  Errors, whether those of the Washington Post, New York Times or other print media, can be identified and corrected and we often get to see the error identified and the correction appear in the next printed edition.  When such changes and revisions are simply made without note, as it now easily done online, it diminishes the integrity of the published and the publisher.

Lord knows there is a steady stream of talk about dishonest media and the criticisms, not surprisingly, often show up in fluid forms that appear and disappear whimsically.  Such accusations create a fog that most of the time, find little basis in fact.

It’s reminiscent of the British soldiers in New England in 1775 who marched in lines in parade order and were shot by American colonists who saw the rigid structure of the British King’s forces as an advantage they could take advantage of.  Today, through online representatives and reports about them, deliver a steady flow of statements, some of which are true and many others which are not.  And because media has long been held to high standards for accuracy there’s an assumption that the transferring of news to and through the web is a linear continuation of that assumption of truth.

The printed word is under attack but, from my perspective, has never looked better.  It’s real and it’s vetted and when need be, corrected.  It’s so much better than the bull shit now flowing on line that is often intentionally inaccurate and rarely corrected.

So, encourage your friends and family to read the print word.  A few of them may discover, as so many who collect the printed word have, that its solid and reassuring.