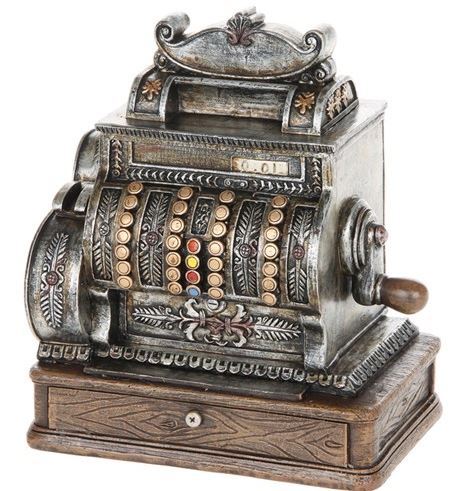 Tine to ring them up?

The U. S. Supreme Court reached an important, not particularly unexpected decision on sales taxes that potentially effects everyone who sells anything into a state other than their own. The court has opened the door to requiring any such merchant, say a bookseller, for instance, to collect and remit sales taxes for that other state. There are 45 such states, but on top of that, 10,000 local entities that can now require their sales taxes be collected. The fun has only just begun.

The legal technicalities of the case have to do with the Commerce Clause of the U. S. Constitution. That clause provides jurisdiction over interstate commerce to the federal government. In two previous decisions, the Court ruled that states could only regulate interstate commerce, such as requiring out-of-state merchants to collect sales taxes, if those merchants had some "nexus," or connection to that state. If it had employees in the state, a store, a warehouse, something like that, they could require the merchant to collect their sales tax, even if the sale itself was being made by internet or phone to a sales office in another state. However, if there was no nexus, no dice.

Now, that has changed. In a 5-4 decision, the Court did something it rarely does - overturn its own precedent. It said that the old decision was wrong, in effect, the mere fact that an out-of-state merchant sells to customers in another state is essentially enough to fill any need for nexus.

Their reasoning seems odd to this observer, one based more on sympathy towards states having difficulty collecting taxes than on constitutional law. There is a better way to tackle this problem, if the people of America want to "fix" it, which the minority of four pointed out. Their representatives in Washington can pass such legislation tomorrow if they so choose. They can authorize use the federal government's Commerce Clause power to authorize the states to require collection of sales taxes from out-of-staters. The issue here seems to be that while the states, local retailers, some internet/mail order companies, and the Supreme Court all want to fix the "problem," the American people do not.

A few statements by the majority in their opinion struck me as strange. The Court says that the old nexus doctrine "has prevented market participants from competing on an even playing field." This has been the primary claim of states and local merchants, that those "Main Street" retailers are at a disadvantage as they must charge sales taxes. So, does this change make it equal? Local retailers collect one uniform rate. It's simple. In those five states without a sales tax, they collect none. Out-of-state retailers now can be compelled to compute, collect and remit 45 state and 10,000 different local jurisdictions' taxes. Is this an "even playing field?"

That's only a part of it. Chief Justice Roberts, in his dissent, points out some state idiosyncrasies that merchants in the other 49 must now learn. New Jersey, for instance, charges sales tax on yarn used for art projects, but not for knitting sweaters. Texas charges sales tax on plain deodorant, but not on deodorant containing antiperspirant. In my favorite, Illinois charges sales tax on Snickers, but not on Twix. Why? Because Twix, having some flour in them, is a non-taxable food item, while Snickers is a mere candy. If this is fine with the people of Illinois and their representatives, it is fine with me. That is their right. At least Illinois merchants have a chance of learning this. But, are retailers supposed to learn every bizarre idiosyncrasy for each of the 45 taxing states? And, by the way, some states have temporary tax holidays on specific merchandise, but the dates and items given a day off are not uniform across the states.

The majority's answer to this inequity is particularly strange. The Court responds, "Eventually, software that is available at a reasonable cost may make it easier for small businesses to cope with these problems." Eventually? May? Shouldn't the horse come before the cart? Eventually, pigs may fly, but so what?

Here is a contradiction by the Court in their own reasoning. The majority says the rule keeps merchants out of other states to avoid having a nexus. They say, "Distortions caused by the desire of businesses to avoid tax collection mean that the market may currently lack storefronts, distribution points, and employment centers that otherwise would be efficient or desirable." Isn't discouraging internet retailers from opening local competitive stores a benefit to local retailers, rather than a disadvantage? Over 90% of all sales are made through local retail, not online and mail order. Is it really a positive for Main Street that Amazon, which now voluntarily collects sales taxes for all 45 states, is opening local bookstores, grocery stores, and who knows what next? Isn't the ability to provide local service a competitive advantage available only to those businesses with a nexus to the state?

The court argues that "Stare decisis [judicial precedent] can no longer support the Court’s prohibition of a valid exercise of the States’ sovereign power." All well and good, but who is stopping the state from collecting their taxes, out-of-state merchants? Consumers are legally obligated to pay sales tax (technically "use tax") where a sales tax is due but the merchant doesn't collect it for them. The real problem here is that most consumers either don't know about this requirement or are scofflaws. Is it out-of-staters' fault that a state cannot enforce its tax laws on its own citizens? Should New York be compelled to send revenue agents to South Dakota if South Dakota can't get its citizens to pay their property taxes? The Court talks about tax avoidance, but it is not the out-of-state merchants who are avoiding taxes. They don't owe anything. It's the state's own residents. The Court notes that "consumer compliance rates are notoriously low" with voluntary sales/use tax payments (around 4%), but again, why is that some out-of-state merchant's responsibility?

The Court shows extra sympathy for the plight of South Dakota, saying, "Particularly because South Dakota has no state income tax, it must put substantial reliance on its sales and use taxes for the revenue necessary to fund essential services." Who is stopping South Dakota from employing an income tax instead if it can't enforce its sales tax, the people of New York? Most states have an income tax and no other states help them collect those taxes. In fact, there are three states that have an income tax but no sales tax - Oregon, Delaware, and Montana. If South Dakota is having trouble surviving without impaneling out-of-staters to collect their sales taxes, why can't they call tax authorities in those three states and ask how they manage to survive?

We noted earlier that simply selling goods to customers in another state seems to be sufficient to constitute "nexus." Here, the Supreme Court adds a wrinkle and an uncertainty. It says that clearly there is nexus under South Dakota law because "The Act applies only to sellers that deliver more than $100,000 of goods or services into South Dakota or engage in 200 or more separate transactions for the delivery of goods and services into the State on an annual basis." Is this a minimum requirement for nexus? The Court does not say. Will $50,000 or 100 transactions pass muster? How about $25,000 or 50? $1 or 1? What is the minimum? Is there a minimum? We don't know. What does the Constitution say?

We take no position on whether it is good or bad to compel out-of-state merchants to collect sales taxes. That is for the people to decide. What we do think is Justice Roberts, joined by Justices Breyer, Sotomayor, and Kagan, have a much more sensible answer to this issue. They do not approve of the prior decisions that set up the old nexus test, even agreeing with the majority that it was wrongly decided at the time. Nevertheless, people depend on precedent, and it should not lightly be overturned, particularly in cases where a legislative remedy is readily available. This is not an issue of a fundamental constitutional right such as free speech or freedom of assembly. This is about making it easier for states to impose certain taxation requirements on merchants. A constitutional amendment is not required to change the outcome. It simply needs Congress to pass a law delegating to the states certain powers under the Commerce Clause.

The minority points out, "Correctly calculating and remitting sales taxes on all e-commerce sales
will likely prove baffling for many retailers. Over 10,000 jurisdictions levy sales taxes, each with different tax rates, different rules governing tax-exempt goods and services, different product category definitions, and different standards for determining whether an out-of-state seller has a substantial presence in the jurisdiction." They continue, "The burden will fall disproportionately on small businesses... A good reason to leave these matters to Congress is that legislators may more directly consider the competing interests at stake. Unlike this Court, Congress has the flexibility to address these questions in a wide variety of ways."

It may be true that 41 states supported South Dakota in its quest to facilitate tax collection in this manner, but a solution is already in the hands of the elected representatives of those states in Washington. If this is what their people desire, those representatives can make those changes, and implement them in the fairest way possible, any time they so choose. So far, those elected representatives have not made this choice, but that is not a good reason for the Court to make it on their behalf.