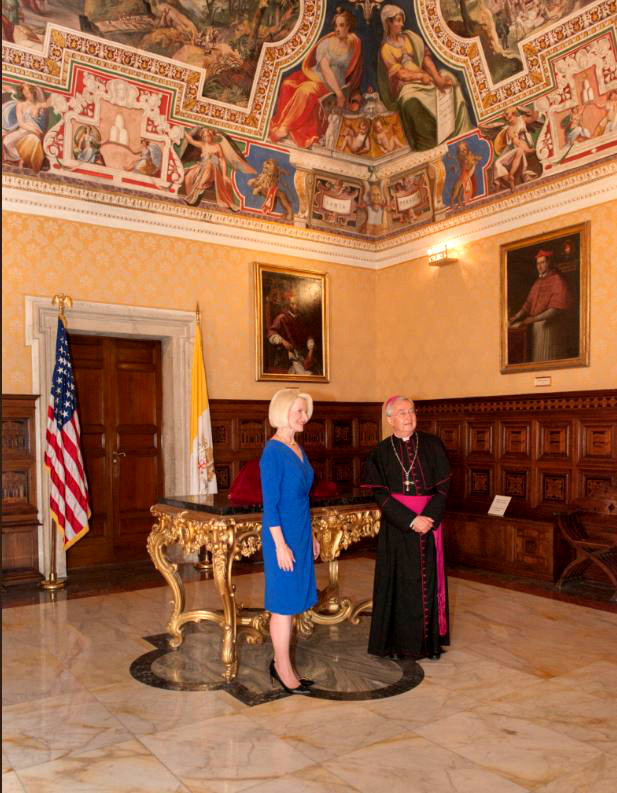 Columbus has sailed back home, in a manner of speaking. A Columbus Letter, one of the high points of any collection of Americana, has been returned to its rightful home. That home is in the Vatican.

A Columbus Letter is a copy of the letter written by the notable explorer to King Ferdinand and Queen Isabella, describing his discovery, then known as the New World, today as America. The Royals had sponsored Christopher Columbus' journey so he had to tell them what he found. He described it in glowing terms, easily worth their investment.

There were numerous printings in the first few years after his return. They are in several languages. All printings were short runs. Around 80 copies in total are known to have survived. This is an early one in Latin, printed in Rome by Stephan Plannack in 1493. Any one of these letters is worth a large amount of money.

This particular copy, just returned to the Vatican, also made the journey to the New World. Exactly how is unknown, and it certainly was not sponsored by any authorities. It was pilfered from the Vatican Library, though no one knows for certain when, how or by whom. A very good forgery was placed in the collection in its stead, so no one would be any wiser. The original was certainly there in 1921. That's when the Vatican received it. Previously, it was owned by Gian Francesco De Rossi. De Rossi's wife donated his collection to the Jesuits, who in turn gave it to the Pope in 1921. In 2004, it was purchased by collector Robert Parsons, of Atlanta, Georgia, U.S.A., from a New York dealer. That leaves a lot of time in between. Parsons, who was an innocent buyer, reportedly paid $875,000 for it.

Where the book dealer obtained it has not been clearly identified, though reportedly it came from Massimo de Caro. De Caro, who is currently serving a seven-year sentence for book theft, is one of the most notorious book thieves in history. Somehow, through political connections, he was placed in charge of the Girolamini Library, an ancient church library in Naples. This was the quintessential example of putting a fox in charge of the hen house. De Caro had a questionable reputation, but not on the level of what was revealed in 2012. He is believed to have taken as many as thousands of books from the library under his care, which he sold through connections all over the world, including a cooperative German auction house.

However, while buying a book from De Caro in the current decade would be a giveaway, the dealer must have bought the Columbus Letter no later than 2004, when De Caro's reputation was not yet made. Interestingly, one of De Caro's modes of operation was to have expert forgeries made, which he pawned off as the real thing. In this case, if De Caro is the guilty party, instead of selling the forgery, he used it as a substitute for the real copy. He would have expected this would reduce the likelihood that the forgery would ever be examined and revealed, leaving his theft undiscovered.

In 2013, Parsons had an American expert in rare manuscripts examine his copy. As the thief evidently assumed would happen, he found it to be authentic. However, the same expert had examined the Vatican copy a year earlier and was suspicious. It was evidently an exceptionally good forgery, but one thing wasn't quite right. The stitching in the binding did not quite match up with the marks in the pamphlet. There were other factors as well. However, the stitching of Parsons' copy did match up with the binding from the Vatican copy.

Robert Parsons died in 2014, aware that it might be stolen. It was, naturally, disappointing to him. With final confirmation that it was the Vatican copy, Mrs. Parsons sadly consented to its return. On June 14, Callista Gingrich, U. S. Ambassador to the Vatican, presented the letter to the Vatican Library. Like Columbus himself, his letter has returned to his homeland after its long journey to the New World. Unlike Columbus, it will never be able to tell us how it got there in the first place.