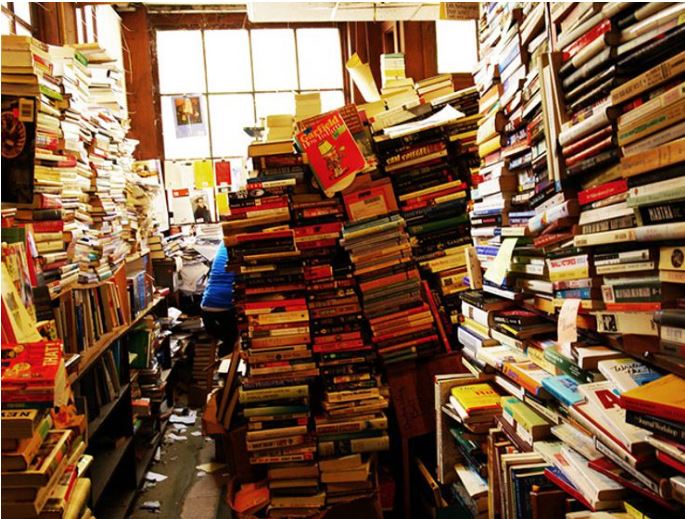 "I must have books and acquiring them is all the fun."

As a child I would accompany my book buying dad on his frequent rounds to the various basements and sub-basements of Goodwill Industries in Detroit, where the books were not shelved, but piled in heaps, often to the ceiling in dim rooms illuminated by the light of a single bulb hanging by an electrical cord and casting spooky shadows on the moldy walls.

He would spend hours poking through them and eventually some of those books would come home with us. At our house they led a more organized life, on shelves, in stacks at the top and bottom of the stairs, on my mother’s desk, on my father’s desk, and in boxes in the packing room - ready to come in or go out.

But we were booksellers, so it was natural for us to have books, a lot of books.

There are, it seems, other people who acquire many books and often not even for reading, selling or library purposes. These folks have a different name, they’re not collectors, they’re termed “hoarders” and their condition is sometimes called “bibliomania”

Wikipedia defines “Bibliomania as a disorder involving the collecting or hoarding of books to the point where social relations or health are damaged.” According to the online reference site “Bibliomania is one of the several psychological disorders associated with books -- such as bibliophagy (book eating) and bibliokleptomania (book stealing). Bibliomania is characterized by the collecting of books which have no use to the collector nor any great intrinsic value to a more conventional book collector. The purchase of multiple copies of the same book and edition and the accumulation of books beyond possible capacity of use or enjoyment are frequent symptoms of bibliomania.”

This condition is not just a Western cultural phenomena. The Japanese slang term “tsundoku” means acquiring reading materials but letting them pile up without reading them.

East or West, another very different explanation for the condition is contained in the quote by A. Edward Newton: "Even when reading is impossible, the presence of books acquired produces such an ecstasy that the buying of more books than one can read is nothing less than the soul reaching towards infinity ... we cherish books even if unread, their mere presence exudes comfort, their ready access reassurance.”

A less sanguine view links bibliomania to compulsive hoarding, also known as hoarding disorder, which is a pattern of behavior that is characterized by excessive acquisition and an inability or unwillingness to discard large quantities of objects that cover the living areas of the home and cause significant distress or impairment. Compulsive hoarding can create health risks, impaired functioning, economic burden, and adverse effects on friends and family members.

Typically hoarding can prevent uses of space, enough so that it can limit activities such as cooking, cleaning, moving through the house, and sleeping. It can also put the individual and others at risk of fires, falling, poor sanitation, and other related concerns. Compulsive hoarders may be aware of their irrational behavior, but the emotional attachment to the hoarded objects far exceeds the motive to discard them.

Mental health professional sometimes (but not always) label the condition as an offshoot of Obsessive Compulsive Disorder (OCD) but not everyone agrees on this diagnosis, or even that it is a psychological abnormality. According to the American Psychiatric Association’s web site,“Some individuals with hoarding disorder may recognize and acknowledge that they have a problem with accumulating possessions; others may not see a problem.”

Still others prefer a different definition:

“I tend to think I'm a biblioholic rather than a hoarder,” commented bookseller Michael J. Osborne. Biblioholic is defined as a love for books, especially fine editions.” Osborne said jokingly he hopes to one day get around to “Biblioholics Anonymous” or BA. “Kidding aside,” he continued, “I often wonder why I buy so much? I sold off a few hundred boxes to a colleague a while back,..." and in the next breath he continues, “I'm working on a few hundred more….. Not that I need them, more that I want them.”

“Behind me are about 40 file boxes (you know the kind), of books, half of which recently acquired, the other half in boxes for at least a year. Behind that are shelves, many, of planning books, and although I have cataloged a chunk there is a lot left and I still continue to buy them. Then there is roughly 50 linear feet of books yet to be cataloged, many of which I have had for a VERY LONG time. Then the 20 boxes stacked in the corner. Then the books about books I have amassed. Then I think about my age and my health and I say to myself, “You will never catalog all of these books.”

“But I must have books, and acquiring books is all the fun. It’s an elixir. Someone calls. They have books. You go. Once I have examined a book and experience it, drink it in, then I put it aside, craving the next one. Biblioholic. Yup.”

Another dealer, Joanne Hoefer observed: “I had early this year a couple come in and ask if I took cookbooks. I said ‘Yes.’ They said their brother-in-law had passed and they had a few boxes they were mine if I wanted them? Sure," I said, "I'll take them.”

“They showed up the next day with 57 large Home Depot boxes of cookbooks so heavy I could not move them, had to take books out of each box to even be able to move the cartons.

“There were almost a thousand books she said, most of them brand new. “ I still have six boxes left to work through. The guy was a plumber, electrician- handyman, it appears he bought them just to leaf through.”

Is death the only solution? Not quite, says Lynn Wiencke of Chisholm Trail Bookstore, “Moving cures hoarding.”

Ten hoarders killed by their own junk