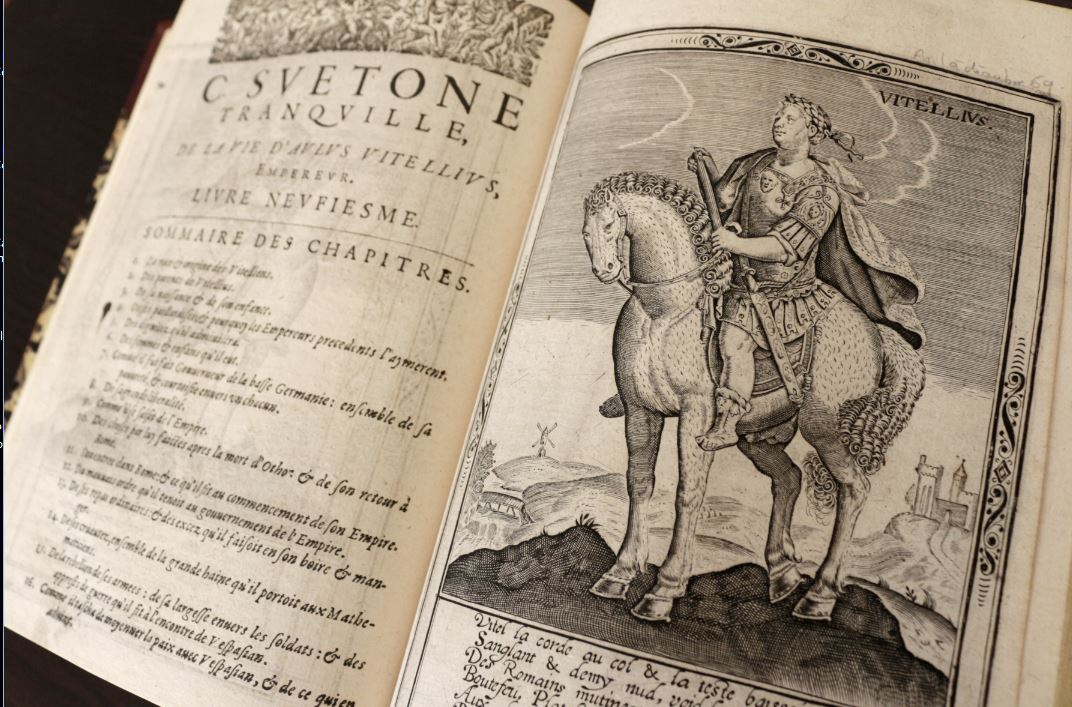 At the end of the 1st century, Pliny the Younger wrote to Suetonius: “Do me a favour, let me read your name at the frontispiece of a book.” Two thousand years later, Suetonius’ Lives of the 12 Caesars has become a worldwide classic. Let’s take a look at the first French translations of this book, especially Richer’s edition of 1611, famous for its gorgeous equestrian engravings.

A copy of this 1611 edition (Paris, chez Estienne Richer) was sold at an auction in Paris, in 2013, for 450 euros plus charges. It was complete, which is rare, since some of the twelve full-page equestrian engravings are usually missing—they were often removed and framed. Only the first one is signed: D. Pelletier, but they are obviously all from the same hand. The horses are very impressive with thick legs, sumptuous manes and lively expressions. Julius’ horse is as described: “A very remarkable horse with feet almost like those of a man, the hoofs being divided in such a manner as to have some resemblance to toes.” Caligula is shown riding his powerful stallion, Incitatus: “It had a marble stable, an ivory feeder, purple housings, and a frontlet covered with precious stones; Caligula also gave his horse a home, some slaves and fine furniture, so that people invited in its name could feel at ease; there is also written indication that he intended to appoint it consul.” The terrible Vitellius arguably rides the most beautiful horse of the series with curled tail and mane, and a sprinkled coat. The quality of these engravings makes this edition very attractive—in order to be complete, it must also feature an engraved frontispiece.

Our bookseller, Estienne Richer, was from a printers’ dynasty located in Paris. In the early 17th century, they published the first French newspaper ever, Le Mercure François. Their 1611 edition of The Lives of the 12 Caesars offered a new and anonymous translation. Antoine-Alexandre Barbier, in his Dictionnaire des ouvrages anonymes (Paris, 1872), identifies the translator as Jean Baudoin (circa 1590-1650), a tireless worker also responsible for the first French version of Tasso’s Gerusalemme liberata, and who eventually died from want in Paris. The writer Pelisson wrote about him: “In all his works, his style is natural, easy and French.” Although a little bit obscure, because still full of the 16th century style, his translation was reprinted several times, up to 1700. The first edition (1611) remains the most interesting one as it contains historical annotations—they are missing from the 1616 and 1628 reprints, for instance.

Thanks to Pliny the Younger, Suetonius was appointed procurator of public libraries in the reign of Hadrian (117-138). As such, he had access to many archives. His Lives of the 12 Caesars, said to be a typical example of the “anecdotal and erudite stories” that became fashionable at the time, is one of a kind. Although, as a supporter of the Senate, he allegedly darkened some deeds of the Caesars, his book is a primary source for historians—and an everlasting source of disgusting wonder for the rest of the world! He gives almost unbelievable details on the private lives of the Caesars, including their sexual deviancies. Lust, hatred, blood-thirst, incest, murders, nowadays tabloids couldn’t do better! Suetonius’ book is just like the lives of the Caesars: uncensored—well, sort of.

Julius (100 BC-44 BC), the “husband of all wives, and the wife of all husbands,” loved married women too much. Yet, he appears like a sane man when compared to the others. So do Vespasian (9-79) and Augustus the Divine (63 BC-14), although you should think twice before having dinner with the latter. “Once, he took the wife of a consul from the room where everybody was having dinner, in front of her husband, brought her to a nearby room, and then came back with her later on, her ears reddened her hair in disorder.” His successor, Tiberius, was nicknamed Biberius because he loved drinking—he was a lusty man, as well as a vane one. Anyone going to the toilets with some coins in his pocket was whipped—his portrait was engraved on the coins! Among his favourite torments was “tying the penis of men” and forcing them to drink. When he died, “the Roman people on a whole rejoiced”. But only to welcome Caligula (12-41)! “He lived in the habit of incest with all his sisters,” Suetonius writes. “When dining among many people, he had them going under the table in turns, with his wife sitting nearby.” One day, as a gladiator fighting against him complacently fell at his feet, Caligula stabbed him to death and jumped around with joy. Nero (37-68), for his part, relentlessly tried to murder his mother, using the most surprising stratagems, such as a falling ceiling and a sinking ship! His last moments, as related by Suetonius, are worthy of the best Hollywood thrillers. This powerful Caesar was left all alone in his empty palace, once the testimony of his so-called grandeur, that day the silent witness of his petty misery. He ran up and down the cold marbled corridors of his fallen glory in fear and distress, before putting an end to his life without dignity. What a life, what a death—what a book!

I remember my father telling me of his own father rejoicing upon noticing that he was reading Suetonius as a teenager—such a cultural reading! Just like Rimbaud’s mother, he rejoiced over his good child, “unaware of his tormented soul led into repugnance” (Les Poètes de sept ans, 1871). Suetonius’ book has always been a hot read. “What can not be justified is the revolting cynicism of his style, and the disgusting obscenity of some of his descriptions,” reads Le Mercure de France (Paris, 1806). “Saint Jerome complained that he had written the lives of the Caesars as freely and horridly as they had lived them, (...) and that he was advertising the greatest sins while reporting them.” The very first translation in French was Michel de Tours’ (Paris, 1520)*. Then came Georges de la Boutières’ (Lyon, 1556) and Jean Baudoin’s (Paris, 1611). Responsible for the 1556 edition, the printer Jean de Tournes warned the readers: “Some may say that this book gives too much examples of cruelty and lechery—to which I retort that the white colour is never as dense as when put aside the black one.” As a matter of fact, he was giving a slightly light version of Suetonius, deprived of two passages—the same that were later censored by following printers, including Estienne Richer.

* I’ve been unable to find a copy online, and I wonder if the bibliographers could be referring to the wonderful manuscript of 1520 bought by the French National Library in 2014, and which is not a full translation of Suetonius: gallica.bnf.fr/ark:/12148/btv1b10520228t/f1.item.zoom

I read a copy of the Richer’s reprint of 1628. First, there were those thin lines of old ink in the margins, left by a former reader. Page 92, the same reader went further, crossing out several words in the middle of the portrait of Augustus. Suetonius writes: “His friends would bring him some young virgins; then he bribed their mothers and...” And..? Nothing—but dark stains of ink. I went for a copy of La Harpe’s translation (Paris, 1770). It reads: “ ... and obliged their daughters to strip for a complete examination.” All right! This led me to realize that I had missed out the description of Tiberius’ most notorious deed. This degenerated man was indeed known for bathing among suckling children, whom he called “his little fishes.” He put them between his legs and waited for them to “bite and suckle” him. In fact, this description—the 44th paragraph of his life—, is absent from the 1611 edition—and the following ones. Jean Baudoin totally erased it, and wrote instead: “To make it short, Tiberius’ lust and infamy were so execrable that it’s unnecessary to describe them any further, or to listen to them—we don’t even know about their veracity.” Baudoin also skipped the next paragraph relating the rape of two young men by the same Tiberius, almost in the middle of a public ceremony—the Emperor later ordered their legs to be broken because they dared complaining.

In fact, Jean Baudoin followed the translation of Georges de la Boutière (Lyon, chez Jean de Tournes, 1556), which is one of the first—if not the very first—French translations of Suetonius—the former ones were in Latin. In the early 17th century, Mr. Du Teil (or Dutheil) gave a translation (Paris, 1670). “I haven’t seen the French version printed in Lyon the year 1556, in-4°,” Bayle confesses in his famous Dictionary (Amsterdam, 1697). “Therefore, I couldn’t say if Georges de la Boutière did just like M. du Teil, who has erased entire chapters and truncated many sentences upon realizing that our language couldn’t suffer the vivacity and the strength of this Latin author’s.” Fortunately, he didn’t. Offering for sale a reprint of the same Boutière’s translation (Paris, 1570) in March 2018, the auction house Alde wrote: “This translation is said to be very correct; nonetheless, chapters XLIV and XLV of the life of Tiberius have been shortened.” At least, and contrary to Baudoin’s, Boutière’s intervention on the text is explicit. At the end of Chapter XLIII, he wrote in italic: “I have omitted the fourth chapter (...) and the next one(...) for they are abominable and not fit for every ear.” Yet, in the preface, the printer writes: “As far as the translation is concerned, it is as faithful as can be; none of the author’s words has been omitted, as far as I can tell. I know the translator did all he could to avoid discontent.” Well... Discontent is a matter of perception but, notwithstanding, the translations of Boutière and Baudoin remain quite relevant.

Suetonius’ book is an all-time classic but if it is still a shocking read in 2018, we can imagine 4 or 500 years ago! It is surprising, anyway, that censorship struck these particular passages—of course, they are intolerable, but what about Sporus then? “Nero did all he could to turn this boy into a woman,” Suetonius writes. “He had his genital parts removed.” He then married him officially, and carried him around dressed as a woman. I wonder what Saint Jerome thought of this passage that not even Dutheil refused to translate? Anyway, it is necessary to refer to several copies of The Lives of the 12 Caesars to get the full story in French—equestrian engravings included. Guess that those 12 rotten lives deserve at least two or three gorgeous books.