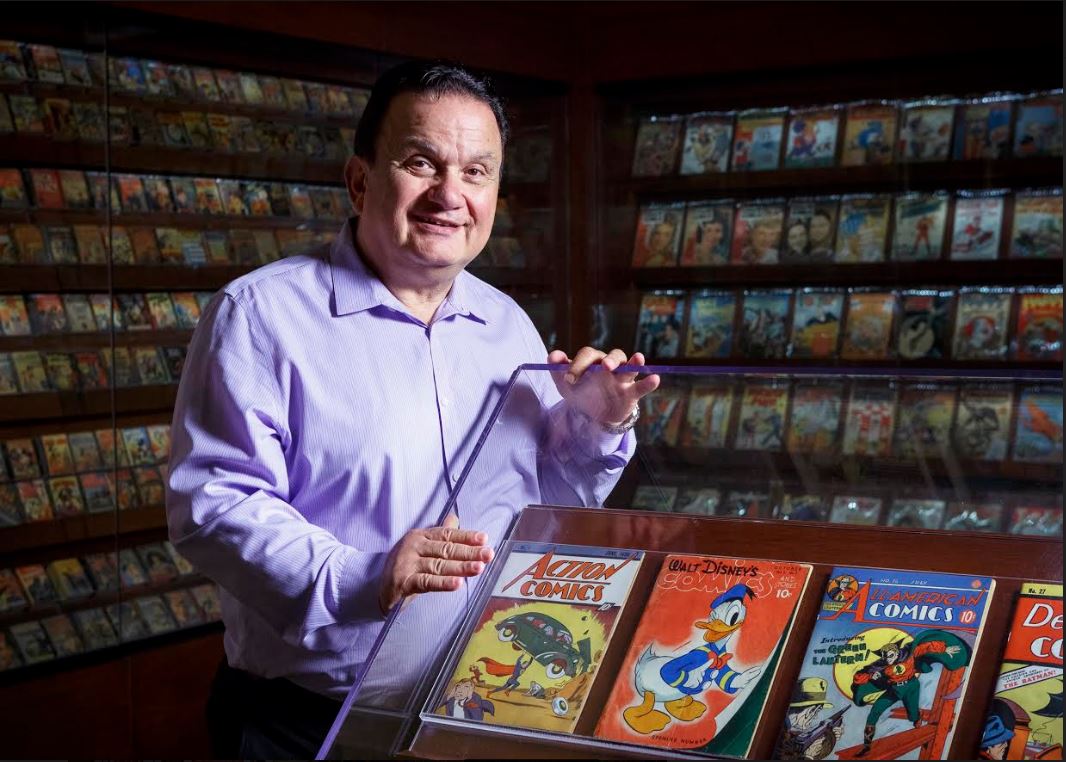 Stephen Geppi with the first Superman comic (Action Comics) and other classics. Courtesy of the Library of Congress.

The Library of Congress has received an enormous book donation, though not the sort of books one might expect to see in Congress' library - comic books. Perhaps, these are what our Congressmen and Senators read after hours, when no one is looking. These may not be confused with great literature or history books, but comics have become a huge part of America's cultural heritage over the past century. Starting with newspaper strips at the dawn of the twentieth century, the "funny papers" soon evolved into a highly popular medium with Disney and his rodent pal in the 1920s. By the latter days of the Great Depression, we saw the introduction of superheroes, Superman, Batman, and eventually a host of others.

By the 1960s, comics broadened into social and political animals, controversial, risqué, defined by and defining their era. Mickey and friends may still have dominated small-town drug stores, but in the cities "underground comics" flourished. Today, all sorts of comics are created and sold, and their popularity is immense. Anyone who has witnessed the crowds at Comic-Con, its spin-offs and other comic book conventions, is aware of how popular they are today, with many attendees dressing up as their favorite characters. Book fairs still draw in healthy audiences, but not of the size and enthusiasm of comic book fairs. The Library of Congress would be remiss not including them.

Not that it has. The Library of Congress already had around 140,000 comic books when it received its large donation from Stephen A. Geppi, 3,000 more items valued at many millions of dollars. Mr. Geppi is an American success story, someone whose name may not be familiar to the average reader, but certainly is to most everyone in the trade. He is the owner of Diamond Comic Distributors of Baltimore, and if you bought a comic book at a comic shop or newsstand lately, it probably was sent there by Diamond. They dominate the business.

Mr. Geppi's success, as with many entrepreneurs, begins with a love for his subject. He was a postal worker in Baltimore when he began buying and trading old comics in his spare time. He soon saw the potential for a business, opening a small shop which he worked part time. Soon enough, it became his major source of income. He quit his job at the post office, and sold new and old comic books full time. From his shop's beginnings in 1974, he expanded to four shops by 1982. He was even distributing to a few other small shops in the area. It was then that he made his major move, taking over a struggling distributorship from whom he bought his books. It struggled no more. He renamed it "Diamond," and over the next decade, growth was spectacular, as Geppi took over several competitors along the way. Diamond became the nation's largest comic book distributor and today dominates the field, holding exclusive distributorships with many of the major publishers. His success enabled Geppi to amass a remarkable collection of comics and related material, much of which he recently gave the Library of Congress, with more possibly to be donated in the years ahead.

Among the amazing things to be found in the Geppi Collection are printing blocks from The Yellow Kid, one of the first and a true pioneer in comic art. There are six storyboards from Disney's first animated Mickey Mouse cartoon, Plane Crazy. If you said, wait a minute, Steamboat Willie was the first, it was the first released, but Plane Crazy was produced earlier, held up to add sound. We will let the Library of Congress tell the rest of the story about Mr. Geppi and his collection. They have provided a news release that anyone interested in comics will find fascinating. However, before you think everything is going perfectly for Mr. Geppi, we add this word of caution. According to the website of his museum, Mr. Geppi is an "avid baseball fan," who attends almost all of the Baltimore Orioles home games. It is not so easy being an Orioles fan this year.

Here is the Library of Congress' press release:

The Library of Congress announced that collector and entrepreneur Stephen A. Geppi has donated to the nation’s library more than 3,000 items from his phenomenal and vast personal collection of comic books and popular art, including the original storyboards that document the creation of Mickey Mouse. This multimillion-dollar gift includes comic books, original art, photos, posters, newspapers, buttons, pins, badges and related materials, and select items will be on display beginning this summer.

The Stephen A. Geppi Collection of Comics and Graphic Arts has been on public display in Baltimore, Maryland, for the past decade and is a remarkable and comprehensive assemblage of popular art. It includes a wide range of rare comics and represents the best of the Golden (1938-1956), Silver (1956-1970) and Bronze (1970-1985) ages of comic books. The mint-condition collection is also noted for its racially and socially diverse content as well as the distinctive creative styles of each era.

The collection also includes motion picture posters and objects showcasing how music, comic book characters, cultural icons and politicians were popularized in the consumer marketplace. Among these are Beatles memorabilia, a collection of flicker rings popularizing comic book characters and political figures such as Martin Luther King Jr., Richard Outcault’s The Yellow Kid printing blocks and the No. 2 Brownie camera model F from Eastman Kodak Company.

One signature item in the collection represents the birth of one of animation’s most iconic characters. Six rare storyboards detail the story layout and action for Walt Disney’s 1928 animated film, “Plane Crazy.” It was the first Mickey Mouse cartoon produced, but the third to be released, after sound was added, in 1929. “Steamboat Willie” was the first Mickey Mouse cartoon to be theatrically released, on Nov. 18, 1928, which marks its 90th anniversary this year.

“The Library of Congress is home to the nation’s largest collection of comic books, cartoon art and related ephemera and we celebrate this generous donation to the American people that greatly enhances our existing holdings,” said Librarian of Congress Carla Hayden. “The appeal of comic books is universal, and we are thrilled that this new addition to the collections will make them even more accessible to people worldwide.”

“When I began collecting comic books as a young boy and then in earnest in 1972, I would have never dreamed that a major portion of my collection would find a home at the Library of Congress, alongside the papers of 23 presidents, the Gutenberg Bible and Thomas Jefferson’s library,” said Geppi. “This gift will help celebrate the history of comics and pop culture and their role in promoting literacy.”

Geppi is the owner and CEO of Diamond Comic Distributors, based in Baltimore. A fan of comic books as a child, he later began seriously collecting them and turned his passion into a series of pop culture businesses. Over the years, Geppi amassed one of the largest individual collections of vintage comic books and pop culture artifacts in the world.

The Library holds more than 140,000 issues of about 13,000 comic book titles, dating back to the 1930s. The collection includes many firsts and some of the most important comics in history, including the first comic book sold on newsstands; the first series featuring Batman and other iconic characters; and All Star Comics #8, which introduced fans to Wonder Woman. The Library also holds a copy of Amazing Fantasy #15, which tells the origin story of Spider-Man, and the original artwork that Steve Ditko created for that issue. The Geppi Collection expands and enriches this strong foundation and fills gaps in specific issues.

The Serial and Government Publications Division maintains one of the most extensive newspaper collections in the world. It is exceptionally strong in United States newspapers, with 9,000 titles covering the past three centuries. With more than 25,000 non-U.S. titles, it is the largest collection of international newspapers in the world. Beyond its newspaper holdings, the division also has extensive collections of current periodicals (40,000 titles), comic books (13,000 titles) and government publications (1 million items). The collection of comic books is available for research use by scholars, collectors and other researchers in the Newspaper and Current Periodical Reading Room. More information can be found at www.loc.gov/rr/news/coll/049.html.

The Library of Congress Prints and Photographs Division holds more than 15 million photographs, drawings and prints from the 15th century to the present day. International in scope, these visual collections represent a rich array of human experience, knowledge, creativity and achievement, touching on almost every realm of endeavor—science, art, invention, government and political struggle, and the recording of history. More information can be found at loc.gov/rr/print/.

The Library of Congress is the world’s largest library, offering access to the creative record of the United States—and extensive materials from around the world—both on-site and online. It is the main research arm of the U.S. Congress and the home of the U.S. Copyright Office. Explore collections, reference services and other programs and plan a visit at loc.gov, access the official site for U.S. federal legislative information at congress.gov and register creative works of authorship at copyright.gov.