A Clever Idea Turns a Library Theft into a Fundraising Event 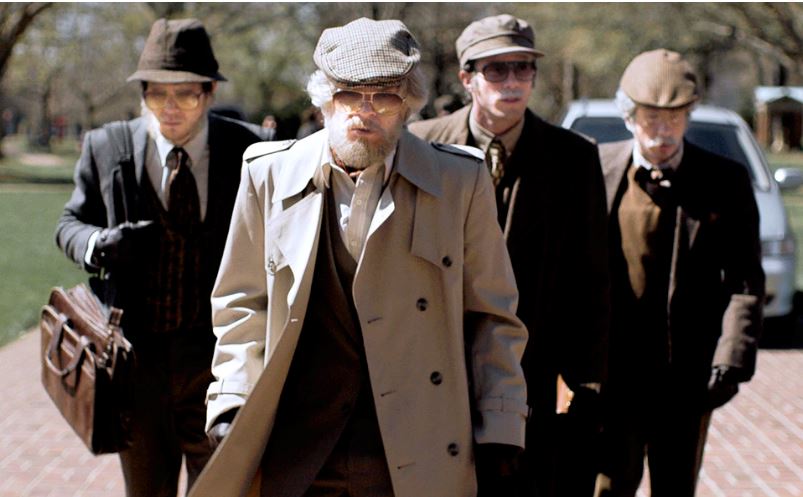 Here is the ultimate example of turning lemons to lemonade. A book theft from a university library was turned into a movie, which is now being used to raise funds for that library. The thieves certainly did not plan it this way.

This story goes back to 2004. Four college students, aged 19-20, hatched a less than well-considered plan to steal some books from the Special Collections Library of Transylvania University, in Lexington, Kentucky. They would arrange a visit to the special collections library to view some valuable books, but then make off with them. In anticipation of their success, the set up a meeting with Christie's in New York to show them the books, some of which they had already identified.

They arranged a meeting with Mrs. Betty Jean Gooch, Special Collections Librarian, for December 16, 2004.They dressed up in costumes as older men, wigs and all, and approached the library. Apparently, they looked ridiculous, like something out of a theater performance, not like actual old men. They may even have been recognized. They left instead. They contacted Mrs. Gooch again, apologized for being out of town, and arranged for another meeting the next day. This one they kept.

On December 17, the four returned to the library. One stayed with the getaway van, one served as a lookout, and two entered the library. After some talk with Mrs. Gooch, they fired a small stun gun against her arm, tied her up, and blindfolded her. They then began gathering up the books they requested to see. The most valuable were four volumes of Audubon's double elephant folio of the first edition of Birds of America, valued at $4.8 million. Other items included a 1425 illuminated manuscript, valued at $200,000, a $450,000 circa 1500 book filled with woodcuts, some Audubon pencil drawings and his book on quadrupeds, and a first edition of On the Origin of Species.

The thieves anticipated the books would be bulky, so they took along a pink bed sheet to carry them. However, they were even heavier than they expected. They were forced to leave two of the Birds of America volumes behind, along with some other items, including one volume of Quadrupeds that got jammed in a drawer. With all that they could handle, the two got into a service elevator and headed for the employee-only exit.

Unfortunately for them, they were spotted by a second librarian as they attempted to escape. They had to hurry, dropping the other two volumes of the most valuable item, Audubon's Birds, before getting out of the library and into the waiting van.

Two days later, telling their parents they were off on a ski trip, the four drove to New York City, where they met with a representative of Christie's. They came with a story of representing some secretive collector. A suspicious Christie's said yes, these books could be sold. One of the young men left them his cell phone number. They returned to Kentucky, books in hand. Meanwhile, back home, police tracked down the email address the thieves had used to originally contact the librarian. It was a Yahoo account, and from that, they learned that same account had been used to contact Christie's. Christie's provided the phone number they had been given, which belonged to the account of one of the thieves' father, and to a phone used by his son. It was all over except for the official arrest, trial, and conviction, which all came in due order. The four were sentenced to six years each.

This whole event was sufficiently absurd and amateurish to warrant the making of a film of the account. The title is American Animals. It has been seen at film festivals, but the official release is set for June 1. It is a semi-documentary - part documentary, part entertainment. The thieves themselves appear, viewing the actors who play their parts. They have made the most of their misadventure (one of them also wrote a book). Even librarian and victim, Betty Jean Gooch, makes an appearance.

This brings us to the very clever fundraising idea. The producers of the movie have offered a prize to those who make a donation to the Special Collections Department of the Transylvania University Library. You get some number of entries, based on how many tickets you buy. The winner gets flown to New York, put up in a 4-star hotel, gets to meet actors Evan Peters, Blake Jenner, and Jared Abrahamson, view the film's premier, and attend the official after-party with cast and crew of American Animals. Unfortunately, we can only tell you about this clever fundraiser. It's too late to enter. The winner has already been drawn as the premier takes place the date this issue of Rare Book Monthly is released. But, all is not lost. You may be too late to enter the contest, but you are just in time to see the movie.