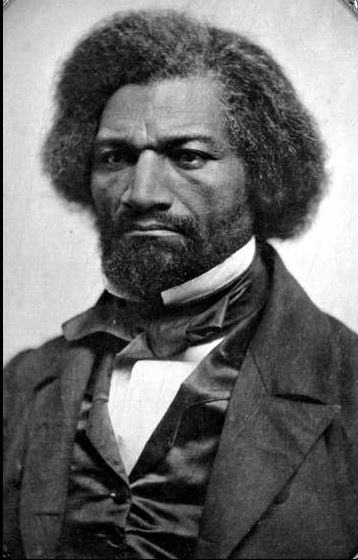 It is long overdue, but one of America's greatest writers, orators, and voices of freedom has finally received a degree from his hometown university, the University of Rochester. It is an honorary degree, as he was denied an opportunity for a normal education when he was young. While he was not able to attend himself, his great-great-great grandson, Kenneth B. Morris, Jr., accepted the award on his behalf. Frederick Douglass died in 1895, but his name remains familiar today with all who know American history. We are a better nation for his presence.

Douglass was born a slave, most likely in 1818, on a plantation in Maryland. He was taken from his mother at a very early age, lived with his grandmother until separated from her at age 6, and was passed around to his master's brother and then hired out to a man who beat him. For a while, his master's wife taught him the alphabet and basics of reading, but stopped when his master expressed the view that learning to read would encourage the slave to seek freedom. Still, Douglass managed to gain access to reading material, and some assistance from white children. He became a voracious, if clandestine, reader. Denied a formal education, he taught himself.

After a couple of abortive attempts, Douglass escaped in 1838. He managed to board a train heading north, making it to freedom in Philadelphia, and then on to New York City. He hooked up with the abolitionist movement and a local church. Already a self-taught writer, Douglass began speaking. His oratorical skills soon became legendary. He went on speaking tours, promoting primarily abolition, but other causes, such as women's rights, as well. In 1845, he published the first of three autobiographies he wrote, Narrative of the Life of Frederick Douglass, an American Slave.

In 1845, he traveled to Ireland and England. He was amazed, not just by the absence of slavery, but by the fact that he was treated as an equal. Even in the North, segregation prevailed, but in Ireland and England, he could eat in the same restaurants, attend the same churches, enter commercial establishments through the front door.

He might have stayed longer than two years, but his calling was the other slaves back home in America, still seeking freedom. That is what brought him to Rochester, where he lived the next 25 years, the longest time in any one place in his life. Way out in western New York, 350 miles from the city, might seem an odd place for an abolitionist to go, but western New York was a hotbed of radical thought in the day. Among those who would live at least part of their lives in upstate New York were abolitionists Gerrit Smith, Harriet Tubman, John Brown, and Soujourner Truth. From the women's movement the area was home to Susan B. Anthony and Elizabeth Cady Stanton. Seneca Falls, host to the first women's rights convention in 1848, is located not far from Rochester.

Douglass would write two more updated autobiographies, My Bondage and My Freedom in 1855 and Life and Times of Frederick Douglass in 1881. He would help recruit black soldiers during the Civil War, continue to work for his causes after the war, and serve in various government offices. The weapon in his battle for equal rights, for freed slaves, women, and all, was his voice. His enormous intellectual, oratorical, and literary skills would be a crushing force against his opponents. Those who fought first for slavery, and later for Jim Crow, created ugly stereotypes of blacks, as illiterate, unintelligent, inferior beings. Just the other day, Roseanne Barr filled the headlines for still applying such a stereotype. Douglass was their living contradiction, a man whose intellectual capacities far outstripped their own.

Douglass now has his degree, a long time coming.