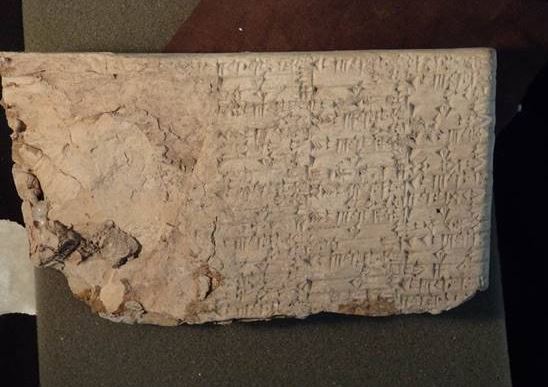 Some of the world's earliest written "books" are being returned to their homeland. For many years, cuneiform tablets and such were regularly taken from their homes in the Middle East. Sometimes, the takings were "legal," as in colonial powers taking them from their colonies, or dictatorial governments allowing for their sale and removal. Other times, it was just plain old looting. In the past few decades, treaties and a growing awareness of the importance of countries' cultural heritage, have shifted the balance of power. At least the more recently looted stuff is being sent back. Such was the case last month when 3,800 items from antiquity illegally taken from Iraq were shipped back home. They dated from roughly 2,000 BC, give or take a few centuries.

This comes from what has been known as the Hobby Lobby case, as the items were purchased by the large retail chain of arts and crafts stores. Hobby Lobby is a privately held company, and its owners, the religiously devout Green family of Oklahoma City, have funded the construction of the $400 million Museum of the Bible in Washington. Whether any of these items were purchased with the intent of displaying them in the museum is unclear. It's moot now.

The company attributed the purchases to "errors" and naivete in the world of ancient artifacts, but the warning signs were so plain that it is hard to imagine that no one noticed. Under U. S. law, it has been illegal to import cultural objects unlawfully removed from Iraq since 1990. It has been illegal under Iraqi law to remove such artifacts from Iraq since 1936. According to the U. S. Attorney, Hobby Lobby's President and a consultant went to the United Arab Emirates in 2010 to view the items. They were told the artifacts were legally acquired in the 1960s. Still, it was odd that they would be found spread around the floor and loosely packed in cardboard boxes with little internal padding if they had been appreciated and held for so long.

After their return, the consultant informed the President and his assistant that the items had been stored in the U. S., but for some reason were shipped to the UAE for inspection. The consultant said they could be appraised for $11,820,000, but were offered for $2,091,000, and the purchase price could likely be negotiated down to $1,600,000. An Israeli dealer said the collection had been purchased by the father of another Israeli dealer in the 1970s who stored them in Mississippi. Hobby Lobby made no attempt to verify this strange and false story.

Later on, an expert provided Hobby Lobby's in-house counsel with a memorandum warning that there was considerable risk in importing such items that originated in Iraq. It noted that 200,000-500,000 artifacts had been looted from archaeological sites since the early 1990s and such items were likely to be stopped by Customs. Nonetheless, the company made the purchase for $1.6 million, the invoice stating the seller was the dealer whose father supposedly purchased the artifacts, though the firm's representatives never met him. Following instructions, Hobby Lobby wired the payments to seven different bank accounts of five separate individuals, none of whom was the alleged selling dealer.

When it came time for shipping, those charged with arranging for shipment contacted the firm's International Department, which recommended using their broker. However, when the broker warned the material might be detained, they chose to have the overseas dealers handle the shipping. When they were shipped, they came with descriptions such as "ceramic tiles" and "Tiles (sample)." Later, some came as "Hand made clay tiles (sample), manufactured in Turkey," valued at $250. None of those were true. If accurately valued, they would have required a formal entry with Customs, which was not made. Some were sent to Hobby Lobby, others to two related companies in Oklahoma City. Finally, in January of 2011, Customs began opening and seizing some of the shipments.

To call this an "error," as did Hobby Lobby's President, seems a bit optimistic. There were too many red flags and specific expert warnings for this to be an understandable mistake. Somebody knew, or certainly was very negligent. Violating a law is never a good thing, but what makes this particularly depressing is the disregard for the reasons these laws exist in the first place - respecting the history and culture of other nations the way we wish them to respect ours.

Hobby Lobby agreed to forfeit the artifacts and pay an additional settlement of $3 million. With the returned antiquities, they are out $4.6 million, but there is no need to feel too sorry for them. Hobby Lobby did $4.3 billion in sales in 2016, while Forbes Magazine estimates CEO and founder David Green and family are worth $6.8 billion.