Avec Privilège, or Death of A Pamphlet 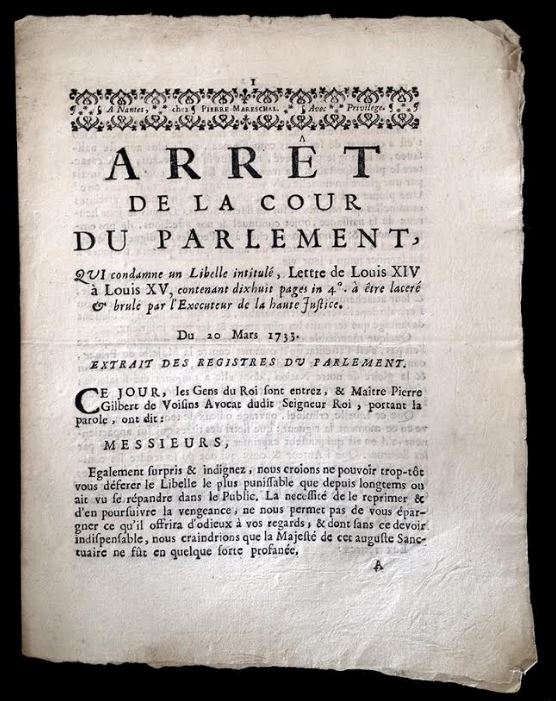 This is both a very ordinary and extraordinary document! A four-page booklet printed on uncut paper in 1733. There are hundreds of those Arrêts de la Cour du Parlement—official publications emanating from the Parliament of Justice— in circulation, and they are almost worth nothing; this particular one cost 20 bucks. Some are sought-after though; those linked to some historical events or that regard the execution of a famous criminal such as Cartouche or Damiens. The one we’re talking here is about the execution not of a man but of a pamphlet—and boy, that was a serious business!

Our “Arrêt”, dated from March 30, 1733, “condemns a libel entitled Letter From Louis XIV to Louis XV, made of eighteen in-quarto pages, to be burnt and slashed by the Executioner of High Justice.” The first interesting detail lies at the top of the front page, and it is to be found inside the decorative cartouche: “Printed At Nantes, by Pierre Maréschal.” At the bottom of the last page, we also read: “On the copy printed in Paris by Pierre Simon, Printer for the Parliament, La Harpe Street, At L’Hercule’s, 1733.” These publications were spread all over the kingdom through a network of official printers: “Some copies of this “Arrêt”, reads the text, shall be sent to the (competent authorities) to be read, published, registered and exhibited if necessary.”

They were then printed “with privilege”. A “privilege” was the official authorization required to print any work in France. In fact, printing was not originally welcome. In the 15th century, the theologians of La Sorbonne perceived it as a threat to Catholicism. Fearing that pagan doctrines might contaminate Europe through this devilish invention, they asked King François 1st to put a ban on it, which he did, in 1535! Of course, he had to step back after a short while, yet appointing a limited amount of printers as well as some “censors”, who were to read every printed book to make sure they wouldn’t hurt the Catholic faith—hence the famous “privilège” that went along every official book in France until 1789. But it didn’t prevent people from using this powerful weapon in every “war” fought afterwards, from the rise of Protestantism to the destabilization of Cardinal Mazarin—the innumerable pamphlets published against him during the 17th century even gave their name to a sort of literary trend, the “mazarinades”. We know of the secret ways used by writers to send their forbidden works to Holland, where fictitious printers like Pierre Marteau—first an alias of the Elzeviers—would print them, before smuggling them back to France. Pamphlets have always been terrible tools and the government took terrible measures to fight them down—as far as treating them as people.

Our “Arrêt” starts with a short and lively introduction: “ Today, the Kingsmen entered (the court room) and Master Pierre Gilbert, lawyer of the said Lord King, (...) declared: Sirs, deeply shocked, etc.” The protocol is quite strict but the judgement shows no impartiality whatsoever. The document calls the incriminated libel “an insolent and seditious letter”, accusing it of committing a “double attempt”; “it dares compromise two holy names in the darkest and most atrocious ways.” The King—Louis XV—, was directly under attack, so he would probably be aware of this decision of Justice. Therefore, the magistrates gave all they had: “Shall we say it? A daring feather attacks the King in person, thus hurting his subjects.” Yet, “since the happy day he was born, the King has been the centre of our affection, of our attention and care; he is so dear to his people, and so worthy to be; and yet some would like to make people reconsider the love they have for him, and the way he inspires them to sacrifice up their lives to him.”

The pamphlet itself is here despised, but not “the attempt it represents against His Majesty, the dignity and greatness of his state, against the reputation and the glory of our nation,” or “the pernicious example it sets, and that deserves the cruellest punishment.” In this dreadful writing, Louis XIV awakes from the grave to address his successor Louis XV: “Small noises, Sir, do not wake the dead...” But the matter was apparently of importance; even Voltaire quotes this pamphlet in his History of the Parliament of Paris, calling it a “despicable satire.” It is a very obscure text written to “back some ultramontanist claims”, Voltaire says. Of course, it came out anonymously. The author, today identified as Robert de Steuil, criticizes the main Minister of Louis XV, Cardinal de Fleury; but the topic doesn’t really matter. Suffice to say it was an illegal publishing aiming at the King—what is interesting is to see how seriously the authorities would deal with such works. Called a “criminal and heinous work” by the magistrates, the pamphlet was therefore sentenced to “expiate its crime through the fire.” Our document warns all booksellers, printers and peddlers not to distribute this libel in any way—or they should then be considered as lese-majesty criminals! The following day—March 21—, the seized copies of the pamphlet were taken to “the bottom of the great stairs of the Palace” at the court’s opening. One copy was spared and left at the Tribunal Registry. The rest, “in accordance with this “Arrêt”, were “slashed and thrown into the fire.” This was carried out in the presence of several magistrates, including the famous Ysabeau, who signed the “Arrêt”.

The operating executioner of High Justice was the same Sanson, who hanged or broke people alive on the wheel when necessary. Thus died pamphlets at the time—almost like men. This almost insignificant sheet of paper is an obituary that reminds us that publishing “sans privilège” (without privilege) was no laughing matter.