Will You Soon Have to Pay/Collect Out-of-State Sales Taxes? 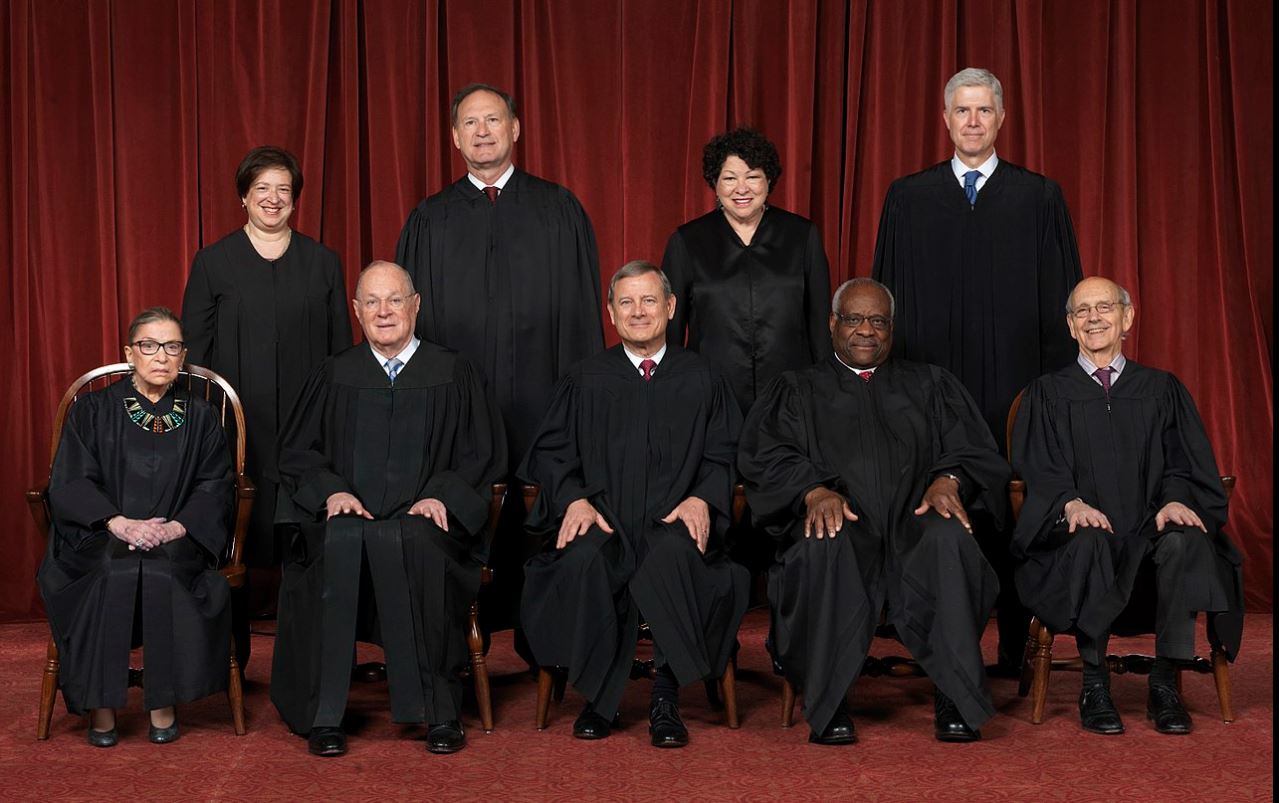 These nine justices will decide the fate of sales tax collection next month.

We are close to learning whether the U. S. Supreme Court will overturn a previous decision that has long protected retailers from having to collect sales taxes from out-of-state customers when shipping directly to them. Right now, if you are a bookseller and take an order by phone, internet, or mail, you do not have to collect sales taxes for states other than your own. The states have long loathed this rule and are now appealing that earlier ruling. If successful, your small book business could be compelled to collect, not just 45 sets of state sales taxes, but those from out-of-state local jurisdictions as well. There are over 10,000 of those. Have fun.

What's at stake here is money, and a lot of it. Collecting these taxes will be burdensome and possibly costly for retailers, but this is of little concern to the states. South Dakota, which brought this suit, estimates the states lose $34 billion per year in uncollected sales taxes. The General Accounting Office gives a more modest $13.4 billion. Whichever, it is a lot of money to states desperate to raise every last penny they can. Officials from at least 40 of the 45 states that collect sales taxes have voiced their support of South Dakota's position. There's no need to mention the obvious - who will pay all those billions of dollars.

Back in 1967, the Supreme Court ruled that states could not compel out-of-state retailers to collect their sales taxes. The reason is that this is an issue of interstate commerce, and the Constitution provides the federal government with sole jurisdiction over interstate commerce. There was one notable exception - where the out-of-state retailer had a presence in the other state. For example, Walmart may conduct its internet business from Arkansas, but since they have stores in every state, they are present in every state, and subject to collecting each state's sales taxes. Most likely, your bookselling business does not have such a presence anywhere beyond your home state.

In 1992, the Supreme Court revisited its earlier decision, and upheld it, but by the slimmest of margins, 5-4. The justices had become uncomfortable with the lost state revenue resulting from that earlier decision, but they do not like overturning precedent. So instead, they invited Congress to enact legislation allowing the states to collect sales taxes everywhere. Their reasoning was that if the Constitution gave the federal government authority to regulate interstate commerce, it could enact laws delegating authority to the states to collect sales taxes from out-of-state retailers.

In the 26 years since the Supreme Court offered that invitation, Congress has never chosen to accept it, to the consternation of some judges. In the meantime, some have spoken out against that older decision. The most notable is Justice Anthony Kennedy, who provided the slim majority last time. Kennedy, long known as the swing vote on the court, has strongly indicated in the last few years that the previous decision was a mistake, and he would now vote the other way. His switch could turn that earlier 5-4 decision protecting out-of-state retailers from collecting all of those sales taxes into a 5-4 vote compelling them (you?) to do so.

Will this happen? It is unclear. If the other judges were all the same as 1992, we might assume so, but most of them have changed. During April, the Supreme Court heard oral arguments. The court's decision will be made by the end of June. Meanwhile, observers are trying to read the tea leaves. While the judges won't render an opinion until June, sometimes you can tell which way a justice is leaning based on the questions he or she asks, or comments they make during oral argument.

Here is what observers have concluded. Four of the justices seem dead set on overturning precedent and subjecting out-of-state retailers to collecting those sales taxes, and their customers to paying them. The aforementioned Justice Kennedy, along with Justices Clarence Thomas and Neil Gorsuch, had already expressed an inclination to overturn. Justice Ruth Bader Ginsburg appears poised to join them, calling the previous decision "obsolete precedent." This odd combination makes it hard to guess how the others will vote. It is not the normal liberal-conservative 4-4 split, with moderate conservative Justice Kennedy providing the swing vote. Rather, these four consist of two conservatives, one moderate conservative, and one liberal.

How will the others vote? Based on their questioning, it sounds like all have some degree of concern about overturning this precedent, though not necessarily being unalterably opposed. Chief Justice John Roberts voiced the opinion that the problem may have already peaked. The large internet retailers are either offshoots of companies with a national presence (Walmart) or like Amazon, so large that it now has warehouses and such (physical presence) all over the country. Amazon now collects sales tax for all states voluntarily (but not for the independent companies who sell through its platform). Justice Elena Kagen expressed her reluctance based on Congress failing to act. Congress, she observed, is "capable of crafting compromises and trying to figure out how to balance the wide range of interests involved here."

Justice Sonya Sotomayor was concerned about "a massive amount of lawsuits" that could arise from overturning precedent. Justice Samuel Alioto expressed the concern that states and municipalities on the brink of bankruptcy will "have a strong incentive to grab everything they possibly can." He thought both the states and internet retailers have a strong incentive to ask Congress to resolve the issue. Justice Stephen Breyer expressed concerns about the cost to retailers. "What does it cost for a mandolin seller who sells mandolins on the internet to sell them in 50 states?" he inquired. No wonder he was befuddled. The court received estimates of everything from $12 per 30 transactions to $250,000 to install a working software system. My guess is that this is out of reach of most antiquarian and rare book sellers, perhaps every last one.

Regardless of how one feels about the relative fairness of not taxing some mail order and internet transactions, Justice Kagan has hit on a crucial point - Congress, composed of representatives of the citizens of the states, has the power to right the perceived wrong any time it chooses. If state officials are dissatisfied with the status quo, they should speak to their own federal representatives, not the courts. While South Dakota approved of a "reasonable" statute, one which exempts smaller online retailers, if the Supreme Court turns this over to the states, each one may impose whatever laws they want on out-of-state sellers, reasonable, unreasonable, whatever they choose. It should be noted that those states will have little incentive to be reasonable toward those out-of-staters as they are not their constituents.

The 45 states and over 10,000 taxing districts actually underestimates the size of the problem for retailers. The states argue that taxes can be easily computed by using zip codes, but taxing districts do not necessarily follow zip code boundaries. Add to that the fact that states do not uniformly tax the same goods. Each state decides what items will be subject to sales taxes and which will not. How will software figure that out? Then there are tax holidays some states hold. For example, Texas has a three-day sales tax holiday in August for back-to-school. However, only certain items, such as school supplies, clothing and such are covered. Additionally, only items below certain price points are covered. Will software figure this out correctly? What if you can't afford the software or run an old-fashion, non-high tech operation? Local retailers have it easy. There is one tax rate and everyone who comes into the store pays the same amount. Imagine if they, particularly businesses catering to tourists, had to card each customer to determine where they live and figure out which state and local taxes to apply to their purchases.

If sales tax collection is mandated by Congress, rather than the court, Congress can set the ground rules. It can require one statewide rate, perhaps adding a uniform point or two for localities. It can require a multistate authority be created to provide software to internet retailers, rather than requiring them to bear the cost of collection. Congress can demand that payment be made to one central authority, not 45 or more of them. It can set up rules for disputes. Otherwise, Alaska can make unjustified demands on a retailer in Florida and that retailer will have to pay it no matter how unjust. The cost of defending that suit in Alaska would be prohibitive. If such tax collection is to be required, then Congress should use its constitutional oversight of interstate commerce to make sure it is done in a fair, just, and reasonable manner.