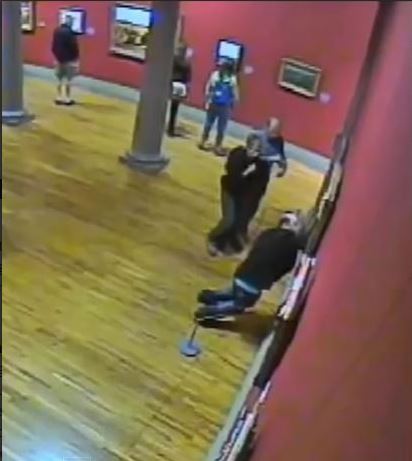 Caught on camera - Andrew Shannon punches $10 million painting and falls to the floor.

Book thief most unusual Andrew Shannon is headed back to his home country of Ireland after a brief interlude spent in England. He has returned in the company of Irish gendarmes after being released as a guest of the state in the United Kingdom. He was released from a short stint as a British house guest after his term for burglary expired. Shannon's freedom did not last long, as Irish police were there to greet him.

Shannon is what is known in the trade as a recidivist. Reportedly he has been arrested over 50 times, convicted 35 times. After a while, it is hard to keep track. Along with being an incorrigible thief, he is evidently not a very good one. Covering your tracks is not one of Mr. Shannon's strong points. Nor is he one to learn from his mistakes. Those who do not learn from history are doomed to repeat it.

Shannon is not a book-stealing specialist. He will take anything that is not tied down. It's just that during his most recent times in his native country, he was convicted of stealing 57 books from Carton House, once the estate of the FitzGerald family. The most notable was one of only six known copies of a 1660 edition of the King James Bible. When the books were found in Shannon's home, he explained that he purchased them for a small price at a fair. He did not sell them nor read them, saying he bought them because they looked nice on his shelves. Neither the police nor the jury believed him. Undoubtedly, his past record didn't help, and the owner of Carton house had photographed the books when he put them in storage during a renovation project. Identification was easy.

Nor was this the first time Shannon had been caught stealing from castles and estates. A few years earlier, he was picked up wandering around the grounds of a large estate. Shannon claimed he was merely looking for a bathroom. However, this did not adequately explain why he had some of the estate's property tucked under his coat. Nor did it explain why he had six such estates' locations entered in his GPS locator, each of which reported missing property.

However, it was none of these fifty-something thefts, nor even all of them put together, that made Shannon a celebrity in the annals of Irish crime. Rather, it was a crime that made no sense at all. On June 12, 2012, Shannon entered the National Gallery in Dublin. While a bevy of security cameras rolled, he walked over to a Claude Monet painting, Argenteuil Basin with a Single Sailboat, valued at a cool $10 million. He looked at it, but no, did not attempt to steal it. Rather he walked away. A short time later he returned, and suddenly, lunged at the painting, punching a hole in it. He then collapsed to the floor, quickly to be revived.

Shannon claimed his heart condition caused him to have a fainting spell. However, this did not really explain why his fist rose up above eye level and punched a hole in the painting. His doctor explained to the jury that Shannon had indeed had quadruple bypass surgery. Still, he also admitted under cross-examination that only 1% of such patients suffer dizzy spells, nor could he explain thrusting his fist up into the painting, nor how he was able to completely recover so quickly. It also most likely was unhelpful in the jury's eyes that Shannon had carried a can of paint stripper with him into an art museum filled with paintings.

So now, Shannon is back in Ireland, this time to face the music concerning an art theft. In this case, he was found with a bunch of paintings in his home, which he neither purchased nor painted himself. One was specifically tracked to a hotel in County Cork. Coincidentally enough, he was staying there at the time the painting was stolen. He will undoubtedly spend a little time in prison, and then be released back onto the street again. From there, we guess he will go visit another town, or another house, maybe even yours.