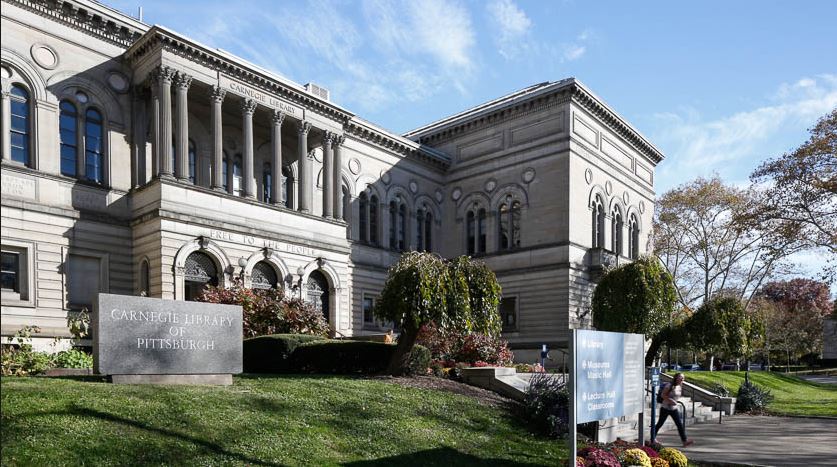 News of a massive theft from the Carnegie Library in Pittsburgh has been revealed. The theft was originally discovered in April of 2017, though detailed information has only recently come out. A book list of 314 missing books has been released. It's an astonishing list. It is filled with rare and antiquarian works of great value. No monetary estimate has been given, but it must be in the many millions of dollars. This was a very serious crime.

The theft was discovered a year ago when an insurance appraisal was being conducted in the library's Oliver Room. This is where visitors, primarily scholars conducting research, can see the books. However, you do not just walk in. You need an appointment and a reason. Librarians then bring the books from locked stacks to you. The Oliver Room and stacks are monitored by security cameras, and only a few people have access to them. You do not get to check these books out of the library, not even from the Oliver Room. When you leave, the books stay. At least, that's how it's supposed to work.

The thefts are believed to have occurred over a period of time. That appears logical as walking out with 354 books at once and not being noticed seems a bit far-fetched. Due to the security procedures involved, the thief or thieves would have to be familiar with them. This has led to suspicion of an inside job. The Oliver Room has been closed since the theft was discovered, treated as a crime scene by the Allegheny County District Attorney's Office. Reportedly, the District Attorney has a suspect in mind, but is not yet ready to file charges.

The Carnegie Library issued a statement concerning the theft, which follows.

"We are deeply saddened by this breach of trust. The missing and damaged items were discovered last spring during an insurance appraisal as part of a multi-year effort to enhance and preserve our unique collections.

"This theft occurred over an extended period of time by knowledgeable individual(s). The items would be of value to a limited number of collectors. For recovery purposes and due to pending litigation, we cannot provide an exact value of the missing materials.

"This is a great loss to the Pittsburgh Community. Trust is a very important component of what we do on a daily basis and we take very seriously the security of all collections. The Library’s Oliver Room is located in a restricted area at CLP – Main and the staff member responsible for the collection is no longer employed by the Library.

"We’re committed to holding the appropriate individual(s) accountable, to the fullest extent of the law. Our goal is to recover those stolen items. Anyone with information about the theft, or who may be in possession of the missing items, should contact the District Attorney’s Office.

"As of now, suspect(s) have been identified and additional details will be shared by the District Attorney’s office at a later date.

"On behalf of the Library’s board and staff, we would like to thank the District Attorney and investigators for their diligence in this investigation. Because this is the subject of an ongoing investigation and litigation, we cannot comment further. We look forward to sharing our story once legal proceedings are complete."

A list of missing books has been provided by the library so that booksellers and collectors can be on the lookout for them. For starters there are first and second editions of what Printing and the Mind of Man called "the greatest work in the history of science," Isaac Newton's Philosophiae Naturalis Principia Mathematica. The first edition was published in 1687, the second in 1714, both during Newton's lifetime. The first edition is likely worth several hundred thousand dollars, the second low double digit thousands.

There is a 1619 Mercator-Hondius Atlas sive cosmographicae, worth around $50,000. The first English edition of the Journal of George Washington, his first book from 1754 when he was 21 years old, is worth somewhat north of $100,000. A first edition of Adam Smith's Wealth of Nations can get you into six figures. A set of Edward Curtis' The North American Indian can fetch over $1 million. There are many more books of substantial value missing. You can find a complete listing of the missing books on the website of the Antiquarian Booksellers Association of America (ABAA). Click here.

The Carnegie's hometown paper, the Pittsburgh Post-Gazette, had an interesting take on the story. They note that while book prices, outside of the more desirable titles, are not increasing, the public awareness of their having high value is. Additionally, books, unlike artwork, not being unique items, are harder to trace back when sold. Add to that the capacity to cut out single pages or plates for separate sale, and you end up with an increase in theft, even if the market in general is soft. Here is their take: Carnegie Library Theft.