Froger's Travel - Nothing wrong with killing Spaniards... and English 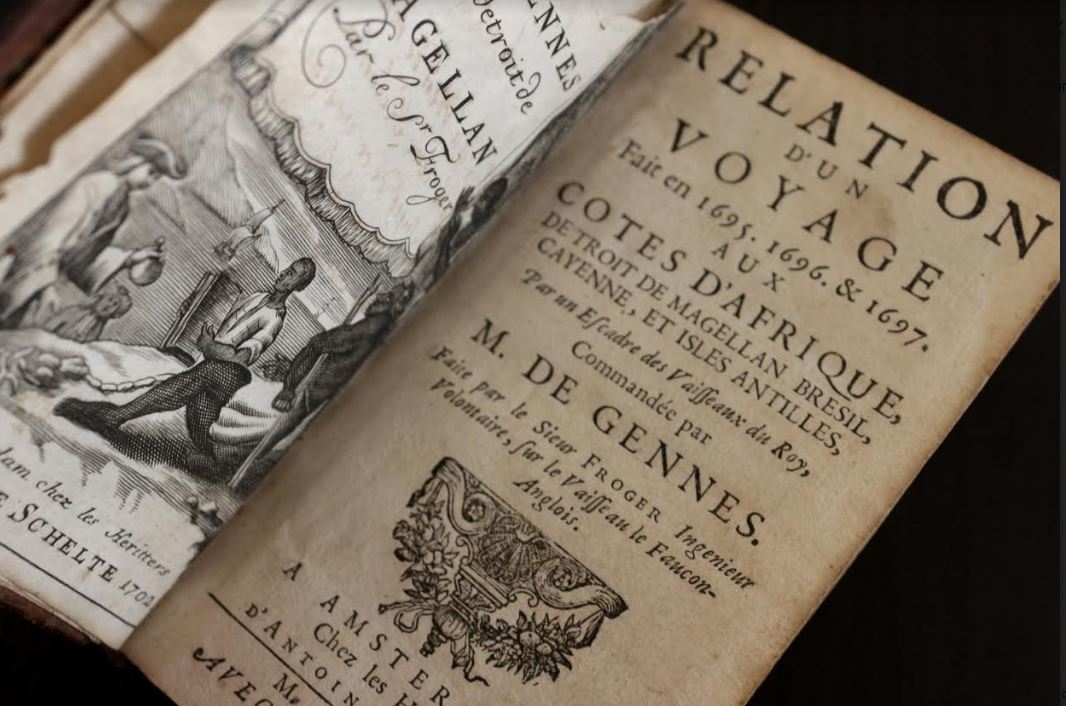 Welcome on board the Faucon Anglois (or English Falcon), one of the six vessels led by Captain Jean-Baptiste de Gennes in 1695. You are about to embark on a three-year expedition that will take you from the coast of Africa to the Strait of Magellan to the West Indies. Your guide? Mr. Froger, a nineteen-year-old French engineer. Purpose of travel? Explained page 73...

Among the small worries of life is realizing that a book we assumed to be complete is actually incomplete. Of course, collating a book can be tricky—even official collations can be fluctuating. I remember a bookseller offering a copy of Labat’s voyage to the West Indies (Paris, 1722) featuring two or three more engravings than usual—does it make all other copies incomplete? Most headaches are due to bookbinders. I know a copy of Bossu’s Nouveaux Voyages aux Indes Occidentales (Paris, 1768), which is complete, except that the binder bound the title page of the first volume twice, including at the head of volume 2, instead of the one reading “Part 2”. Does it make it an incomplete copy? What about all these books in which the binder left the half-title pages out? No wonder we sometimes make mistakes—but rarely the other way round, like finding a supposedly incomplete book is actually complete. This happened to me the other day, with a copy of Froger’s voyage.

Travel books for the 17th century are all uncommon—especially this one. The website bibliorare.com, only lists two copies sold in France between 2014 and 2018. The first edition, entitled Relation d’un Voyage fait en 1695, 1696, 1697, aux Côtes d’Afrique, détroit de Magellan, Brezil, Cayenne et Îles Antilles..., came out in 1698 (Paris), richly illustrated with 29 engravings, including the first precise printed map of Rio de Janeiro, Brazil. Froger was a good drawer and his illustrations are not only informative but also very attractive. As a matter of fact, his book was a success, and although the authoritative bibliophilist Brunet only identified 3 editions in his Manuel, “there were more,” states Paul Pelliot in Journal des Savants (1928). Pelliot lists the following editions: Paris, 1698, which is the same as the so-called 1699 one. Indeed, some booksellers sometimes printed a new title page to update their stock at a lower cost (a good copy of this edition was sold for $1,650 in 2015). He also lists Amsterdam, 1699; Paris, 1700 (a good copy was sold for $900 in 2016); Lyon, 1702; Amsterdam, 1702; Amsterdam, 1715—under the title Relation d’un Voyage de la mer du Sud...; and the English translation (London, 1698).

The 1702 edition (Amsterdam) is a small and lovely in-12° volume of 152 pages. Unfortunately, the copy I came across the other day was lacking all engravings—only the frontispiece was present. Notwithstanding the 1st commandment of book lovers—No matter the lower price, thou shall not buy an incomplete book—, I could hardly resist. At the back of the frontispiece, a very elegant and quite old handwriting definitely convinced me. It reads: There’s nothing wrong with this relation; the purpose of this voyage is explained page 73 and on... This was a good start. The follow-up wasn’t bad either, since I soon learnt from the description of a professional bookseller that this particular edition came out without engravings! And guess what? It is very rare. Of course, this is not the “must-have” edition—but it is complete.

There’s nothing like the first line of a travel book. Froger’s reads: “We left the port of La Rochelle on June 3rd, 1695, with six vessels bound for the South Seas.” Such a thrill of excitement is hardly found in a novel. We don’t know much about François Froger, except that he was apparently born in 1676, in Laval, France; and was still alive in 1715. He was only 21 when he came back from this expedition. There’s nothing wrong with this relation, all right; but what is good about it, then? Especially with the engravings missing? Froger’s style is simple, and his descriptions are not that fascinating compared to other relations from the same period. In Africa, to talk about the “Negroes”, he quotes the Portuguese: “They told us that those living far inland are real savages, claiming to be great sorcerers, and that when a King dies, they kill his favourite wife and some servants to bury them with him so he can use them as slaves in the next world.”

One interesting point is his description of the Patagonians. Following Pigafetta’s relation of Magellan’s first circumnavigation, a lot of people in Europe believed that this part of South America was populated with giants—this fact, although denied by some relations, was confirmed by others, including the very “serious” one of Commodore Byron, in 1766! Froger writes: “”Here are the Patagonians, who, according to some authors, should be height of ten feet tall; the same authors pretend so much exaggerated things about them, including their drinking full buckets of wine! They appeared quite sober to us, and the tallest among them was not six feet tall.”

The next original passage is about the condition of the Portuguese slaves. While sailing from Cayenne, the French ships were approached by two barks. “On board were some Negroes who told us to take them with us; that they would drift to death rather than to return to their masters. (...) Their fate is terrible. As soon as they are strong enough to raise their arms, they are put to work like oxen; they are ill-fed, and their masters knock them out for the slightest fault; their children are sold in front of them (...). When the masters capture a runaway slave, they put him into a heavy iron collar with two long branches and hang them to a post so they can beat them.” The last passage reminds us of the “Surinam Negro scene” to be found in Voltaire’s Candid: “Should this slave run away again, they cut off one of his legs.” But far from these “picturesque” details, it is the description of the triumph of French honour that made this book a success.

The purpose of this expedition is, indeed, explained on page 73. At the time, the French buccaneers from St. Domingue (Haiti) and the English ones from Jamaica, had started to attack the Spaniards in the South Sea—meaning on the West coast of the continent. In 1686, some French ones were stuck in the Strait of Magellan, where they remained for seven years, plundering what they could until they returned home. One of them, Marcety, urged M. de Gennes to send an expedition to the South Sea. “The King gave him some ships, and the expedition made so much noise that several persons of the first quality gladly funded it.” To justify such a bloody and sudden attack, the French blamed the Spaniards for their cruelties towards the Indians. Froger had read Las Casas, of course—like everyone else. He says: “The Spaniards have become the masters of these peaceful countries by shedding the blood of a great number of poor Indians, who longed for nothing but their friendship and alliance. (...) They went as far as killing some to feed the others upon their dead flesh. Hundreds of French can certify that the coasts of Peru are still covered up with the skeletons of their victims crying out for justice.” Consequently... “nothing shall oppose the destruction of those enemies of God and nature. Usurping the title of Christians, they promote idolatry, and live like soft beasts in the middle of their riches.” Is that all? “I could go on; but I must return to my story.” For God’s sake, could some righteous men please do something—like looting, raping and killing?

Yet, M. de Gennes’ expedition was a failure to a certain extent; “because of our insufficient knowledge of the winds,” states Froger. They were indeed unable to sail the terrific Strait of Magellan, and had to turn back. Yet, they defeated the British in Africa, gloriously taking Fort Charles, on the Gambia River. Froger gives a lot of details of this victory, which pleased the “persons of quality” in France—this probably explains why this book proved so popular. In fact, the Minister of Marine, M. de Pontchartrain read his relation; Froger had cunningly dedicated it to him. “Pontchartrain turned his eyes on the young man,” Paul Pelliot writes. “Pontchartrain appointed him to the ship L’Amphitrite.” This famous ship was part of the historical first French expedition to China, in 1698. Of course, Froger wrote a relation of this new travel, but his manuscript “may have been received less enthusiastically than the previous one,” states Pelliot. “And that would explain why Froger didn’t print it—in fact, Pontchartrain had received a relation of the same expedition from another young man, whom he favoured instead.” It was Chevalier la Grange. Froger’s relation of his voyage on L’Amphitrite was eventually published, but not until 1839, by one Saxe Bannister, a British, under the title A Journal of the first French Embassy to China (London). But that’s another book, and another story.

We don’t know much about the last part of Froger’s life, except that he apparently wrote the preface of the 1715 reprint of his travel to America. Of his adventurous life remain two books, including one with “nothing wrong”, printed in 1698 and still worthy to be read in 2018. And if you have a copy without engravings, well—nothing wrong with that, as long as it is complete.