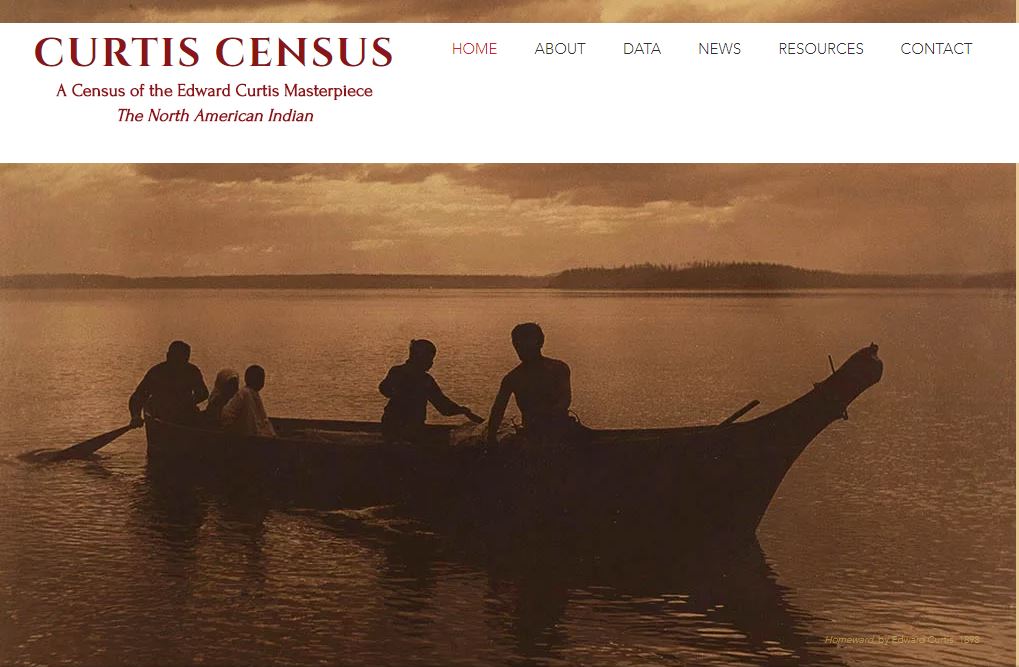 In 1906 Edward Curtis took on a massive project. Curtis was a self-taught photographer, a man with no more than an eighth grade education who managed to set up a studio in Seattle doing photographic portraits. Along the way, he met noted anthropologist George Bird Grinnell, who invited him along as a photographer on the Harriman expedition to Alaska in 1899. The following year, Grinnell asked him to visit a Blackfoot tribe in Montana. Curtis' fate was sealed.

On returning to Seattle, he began running exhibitions of his photography and publishing magazine articles. He next hatched the idea to produce a mammoth work on America's natives, both text and photographs. Such an undertaking was well beyond his means. Curtis approached someone for whom it was not, J. Pierpont Morgan, one of the richest men in the world. Morgan, who undoubtedly got many such requests, initially brushed him off, but with persistence, Curtis was able to secure $75,000 from Morgan. Indeed, Morgan pushed him to create "the most beautiful set of books ever published."

What Curtis produced lived up to Morgan's wishes. The New York Herald called it "the most ambitious enterprise in publishing since the production of the King James Bible." As Curtis explained in his prospectus, the work would consist of 20 volumes of text of approximately 350 pages each, containing 1,500 full-page photographic plates, many hand colored. There would also be 20 portfolios, each with thirty-six 12" x 16" photogravure plates, bringing the number of large photographs to 2,220. The sets would be printed on high quality paper with leather bindings. The regular set would sell for $3,000, the deluxe for $3,850. That amounts to roughly $75,000 and $100,000 today. The foreword was provided by another supporter of the project, the naturalist-conservationist President of the United States, Theodore Roosevelt.

The schedule, Curtis explained, would be three volumes a year, completing the project in seven years, or 1914. Curtis missed that target by a mile. The final volume was released in 1930, 23 rather than seven years later. The project dominated Curtis' life and dissipated his resources. His wife divorced him as he was away for so long. The stock market crash made it impossible to sell more once the project was completed. By 1930, people didn't care much about Indians anymore anyway. His ex-wife sued him for alimony. He required hospitalization after a mental breakdown. He tried to write his memoirs, but they were never published. Curtis died in 1952, broke, he and his work essentially forgotten. It would take another couple of decades before he gained the recognition he has today.

More recently, Tim Greyhavens has also taken on a massive project. Perhaps it is not quite so massive as the one undertaken by Curtis, but nonetheless, an enormous challenge of its own, especially since Morgan is no longer around to finance his venture. Greyhavens is trying to find the location of every copy of Curtis' The North American Indian still extant. Many can readily be located in libraries, but not all libraries have records easily available online, and those in private collections are much harder to track down. It has been close to a century now since they left Curtis' hands.

Curtis' plan was to produce 500 copies of his set. However, it is believed that no more than 300 were ever produced. Morgan died in 1913, and after that, funding became more difficult. As of this writing, Greyhavens has definitively located 134 copies. He has found historical references to another 170 copies, or 304 if totaled up. However, it is likely some of these are inaccurate, or possibly duplicates. Unfortunately, Curtis was stretched so thin with his work he did not keep records.

The sets were supposed to be numbered, with the highest number Greyhavens has found 474. However, there are some significant gaps in the numbering, along with an occasional duplicate, some unnumbered copies, and some with different numbers in different volumes, including one known to be the same as originally received, not a later combined set.

We asked Greyhavens what ever led him to get involved in a project of this magnitude. He responded by email, "I’m a data geek at heart, so when I first looked at the numbers (“only” 300 or so possible sets) I thought that it was really a small dataset to take on. I now realize that the number alone is misleading since there are so many intricacies to the publication. Nonetheless, I love a good mystery, and the game is afoot!"

It should be noted that in hindsight, Curtis gets some critical reviews. His purpose was noble in that he wanted to preserve what was still left of native culture now a century or more under the influence of non-indigenous society. He naturally saw Indians through the eyes of a white man, at times staging photographs to be consistent with what he believed to be accurate. Still, none of this diminishes the fact that he created an enormous trove of data and photography of America's natives earlier than anyone else on this level, preserving much of their history and culture that would otherwise have been lost.

Greyhavens project is called the Curtis Census. There is a wonderful, detailed website he has created, www.curtiscensus.com. You will learn much about Curtis and his book from it. Most importantly, you will find a current census of the books he has found (and other copies he thinks still exist), with details such as where they are located, condition, original subscriber, original cost, and sequence number. He also has a favor to ask of those who share his enthusiasm for Curtis and his census. He is seeking volunteers for the project, and of particular note, if you are aware of a copy not on his census, such as one in private hands, he would especially like to hear. There is a contact form to reach him on the census website.

Link to the Curtis Census: www.curtiscensus.com