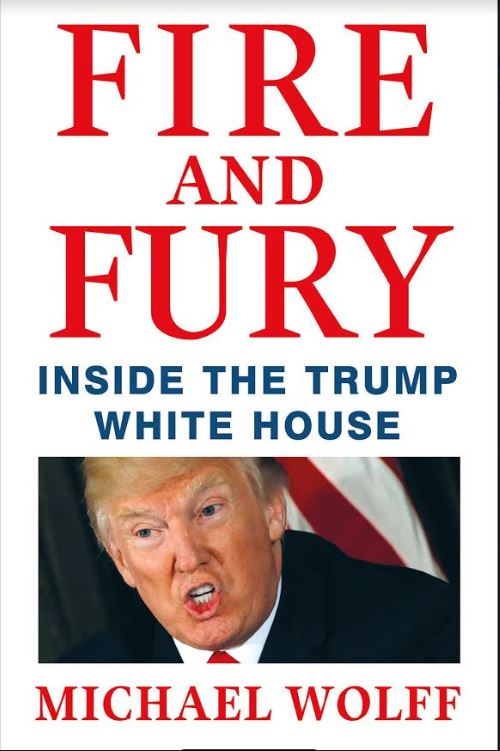 Fire and Fury by Michael Wolff is the best selling work of nonfiction in modern history.

Looking for a sleaze tell-all about a sleaze president? Seek no further. Fire and Fury: Inside the Trump White House is the scandal du jour. The juicy political gossip book by Michael Wolff is not only the biggest seller in the history of publisher Henry Holt & Co., it’s the best selling nonfiction title in modern history.

Wolff, best known as a Hollywood Reporter journalist, hit the jackpot with his fly-on-the-wall reporting of doings inside the new administration. Excerpts published in New York Magazine on January 3 caused an immediate sensation both inside and outside the beltway.

Spurred by response, Holt pushed the book’s release date up and the initial printing pegged at 150,000 was completely sold out on the first day.

By January 24, USA Today reported the title had sold 1.7 million copies in the combined formats of hardcover, ebook and audio. The same day, publisher Holt told The Associated Press that the title was spending its third consecutive week at #1 on the USA Today best seller list and remained No. 1 on Amazon.com and other lists.

In late January John Sargent, CEO of Holt’s parent company, MacMillan, said that ebook sales exceed 250,000 copies and more than 100,000 have been sold in audio.

Holt president and publisher Stephen Rubin told the AP recently that he first learned about a possible Trump book when he and Wolff dined late in 2016. It was soon after Trump’s surprise election, and Wolff mentioned that he had a “really good chance” to get White House access from the new administration. Rubin, who had released Wolff’s 2008 biography of Rupert Murdoch, The Man Who Owns the News, said he quickly worked out a deal to publish the Trump book.

Rubin has said he was hoping Trump would tweet about Fire and Fury. When Trump not only tweeted but threatened to sue, sales exploded. The first press run was not nearly enough to meet the demand, and only near the end of January did Amazon have hardcovers immediately on hand.

It wasn’t only the legit copies that were flying off the shelf. Motherboard and other tech sites reported it as the most pirated book in recent history with knock-off PDF files abounding in the darker corners of the internet and many of them, according to Forbes, infected with malware.

Wolff quickly became the darling of the media circuit; he was the guest who was interviewed everywhere. “I had incredible access,” he told the Washington Post. “I sat in West Wing for hours on end and no one noticed....I go in and I sit there and people just start to talk.”

Appearing on late night TV with Trevor Noah on Jan. 22, he told viewers that Trump’s White House is populated with “the greatest bunch of knuckleheads I think that have ever been assembled in one place,” adding…. “The thing about talking to Donald Trump is that you never get to say anything to him.”

Wolff also predicted that actually what Trump will say sooner rather than later is that he is responsible for this book, its successful because of him, and he is the real writer of this book.”

As if a runaway best seller and a proposed TV series isn’t enough Wolff continued to produce good copy with his mid-January revelations in Vanity Fair that he is absolutely certain that president is having an affair. Wolff said he didn’t publish the allegation because he couldn’t provide proof: “I didn’t have the blue dress.”

The Huffington Post, Business Insider, Variety and countless other media outlets in the US and abroad have had a field day dishing out the juiciest snippets. Among the items causing the biggest buzz was the claim that Trump believed that he couldn’t win and that he promised his wife he wouldn’t win.

Along with Trump’s views on getting his friends' wives into bed, other much cited tidbits are Trump’s unrequited crush on Putin, the Russia investigation, the precarious state of the president’s mental health, and his belief that Nixon was framed for Watergate. His obsession with Rupert Murdoch and his predilection for locking his bedroom door and holing up to watch TV on three screens also came in for plenty of comment.

Among the things people around Trump told Wolff: Trump “never negotiates anything,” “He can’t even read a balance sheet. In his business career, he’s the guy going on television; other people are doing the negotiating. He’s not a businessman; he’s a television performer.”

Here’s an edited list of highlights cited by Newsweek:

* Trump didn’t want to win, and no one in his campaign thought he would win. “Well, it would only be a problem if we won,” former national security adviser Michael Flynn assured his friends about his decision to accept $45,000 for a speech in Russia.

* Trump’s daughter Ivanka described Trump’s hair as a perfectly engineered hairdo that takes many steps to complete. “She often described the mechanics behind it to friends: an absolutely clean pate—a contained island after scalp-reduction surgery—surrounded by a furry circle of hair around the sides and front, from which all ends are drawn up to meet in the center and then swept back and secured by a stiffening spray,” the book says.

* Trump wondered what a golden shower was after hearing reports of the intelligence dossier that alleges that Russian security forces have compromising details about the president.

* Trump eats at McDonald’s so often out of paranoia and because he is a germaphobe. "Long afraid of being poisoned, he would say that one reason why he liked to eat at McDonald's was because nobody knew he was coming and the food was safely prepared," the book says.

* Trump asked Hope Hicks, the White House communications director who had dated former campaign manager Corey Lewandowski, why she was worried about Lewandowski's bad press after he got fired. "You've already done enough for him,” Trump apparently said. “You're the best piece of tail he'll ever have."

* As a candidate, Trump had no interest in learning about the Constitution, which he knew very little about. “I got as far as the Fourth Amendment, before his finger is pulling down on his lip and his eyes are rolling back in his head,” said Sam Nunberg, a former adviser to the Trump campaign.

* Trump didn't enjoy his own inauguration. "He was angry that A-level stars had snubbed the event, disgruntled with the accommodations at Blair House, and visibly fighting with his wife, who seemed on the verge of tears," the book claims.

* Trump never reads. “He didn’t process information in any conventional sense. He didn’t read. He didn’t really even skim. Some believed that for all practical purposes he was no more than semi-literate,” the book says.

Gossip sells and there’s more where that came from. This is a book that promises to stay hot for some time to come.

Some tell-alls have endured for centuries: think Lives of the Twelve Caesars by Suetonius. That text about the emperors of Rome was written during the reign of Hadrian and is still in print today. It’s a book that’s packed with history and also includes sexual preferences of rulers and such enduring pre-TMZ info as Julius Caesar - like Trump - used a comb-over to hide his baldness.

But that’s an exception, most tell-alls have a notably short shelf life. Who today remembers, much less is reading Primary Colors, the salacious peek inside the Clinton White House that caused such a stir back in the 90s?