William Dailey: known by the friends that he kept 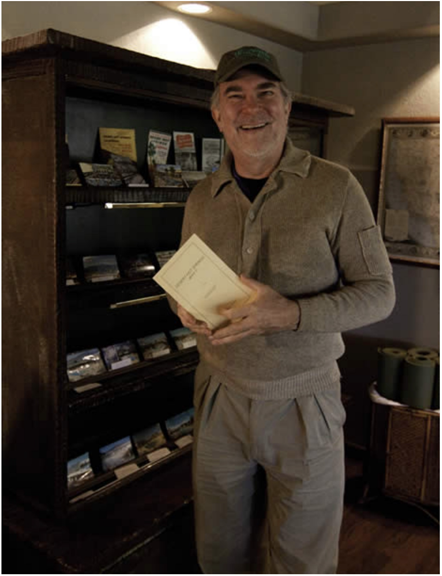 It is okay, even fine, if as a life ends, few mourn.  Most people are neither well known, nor well understood.  Hell, we often don’t know ourselves very well so thinking that others understand us can be a stretch.  And because we now live longer, have multiple marriages, live in many places we now also have developed multiple identities.  People forgive slowly.  With new people, we start fresh.  Life goes on.

But it also happens less often that heart-felt grief is felt with the passing of a meaningful friend with whom friendships have lasted decades.  William Dailey, the book dealer, mentor and friend, who passed away recently, has been remembered and memorialized by men he encouraged, who found him interesting and his perspective, on life and books, valuable.  These men in the trade today speak to us about him.

In 1999, William Dailey took in a dog that’d been hanging around his shop and provided the mutt with shelter and sustenance.

That dog was me.

I am devastated by his sudden, untimely death.

I’d known Bill since the mid-80s. I bought some books from him for my personal collection and resale as a budding dealer. As a dealer I turned out to be a great collector. In those pre-internet days I feared I’d never see those books again and was reluctant to sell them. I was so naive and ignorant.

1999 was the nadir of my life. I was unemployed, miserable, and in the midst of yet another financial crisis, this one truly dire. With painful reluctance I began to sell my collection to Bill, who I knew wouldn’t screw me. Soon, he asked me to catalog part-time; I knew the books I sold to him better than he did and he wanted that knowledge.

Not too long afterward, his two employees quit and he hired me full-time. It is no exaggeration to declare that he saved my life. Finally, I’d found employment that suited my temperament and interests. The depression that had been plaguing me lifted. I felt like a solid citizen again. More to the point, I’d finally found my place in the world and that world opened itself to me. I was at home.

The pay was not great but Bill was otherwise generous. Early on, he slipped me $100, telling me to get myself some new clothes. When I needed a computer, he fronted the money to me, an interest-free loan I did not ask for; he volunteered. There were many other kindnesses. He was free with his knowledge; I learned so much from him. Bill allowed me to grow in the trade, encouraging me to express myself, meet everyone, and become an associate ABAA member. He introduced me to local trade colleagues, not the least of whom was Michael R. Thompson who, over the years, became a close friend, mentor, and champion. It was because of MRT that the ABAA SoCal chapter was saddled with me as Vice-Chair and Chairman, a four year administration informally known as The Years of Living Dangerously Bookish.

We got on extremely well, our cultural tastes similar, our personalities complimentary. We took to calling each other, “Mr. Gertz” and “Mr. Dailey,” a wry tongue in cheek tip o’ the hat to British formality between employer and employee. We developed an arch code as running gag. Bill would declare that he was “going aloft,” which meant that he was going to take a nap in the loft in the shop’s back room. “I’ll be at my tailor’s” meant that he was leaving the shop to run errands. I’d inform him that “I must consult with my alienist” and he’d know I had an appointment with my shrink. Of course, I’d say that in answer to almost any personal question he asked. We laughed a lot.

A few years into my employment we needed an extra hand. One day, Ari Grossman walked in. Instant hire!

Bill bought the Hacienda in Desert Hot Springs. He trusted me to take care of the shop and business while he pursued his dream of becoming an upscale innkeeper, a squire in the sand.

When he decided to sell the building the shop was housed in and work out of his home, Ari stayed with him. I accepted an offer from David Brass. It was the end of an era in my life. We stayed in touch and sight but were on different tracks. We didn’t see each other often enough. I have nothing but precious and fond memories of Bill’s shop. I spent seven of the best years of my life as his employee.

I have nothing but precious and fond memories of Bill, always much more than an employer. He was a great friend.

It’s much too soon to eulogize him but I will say this, and you can quote me. “Bill had an eye for the unusual, the strange, the weird even, in books, art, and people. He wasn’t much of a shopkeeper but he filled their bookshop W & V Dailey (later Dailey Rare Books) with some of the most interesting books and artwork I’ve ever seen. He loved quirky stuff and quirky people and he totally lacked any filter that might cause the rest of us to exercise caution. His collections, his printing press productions, his yoga vegetarian Buddhist retreat motel, his home under a mountain in the desert, on and on all reflected someone utterly unconcerned with other people’s taste or judgments. He had a natural fascination with who or whatever came into his space without being especially attached to anything. He was also notoriously cheap... We were very close and I miss him more than anyone I’ve ever lost in my life.”

I’m in the book trade today because of the opportunity and encouragement he provided.

While the encouragement and mentorship in the “arcana” of the book trade which William so freely offered was the foundation of my own ongoing antiquarian project, it was his friendship and example which have touched me most. Throughout a difficult and transformative time in my life, during which both my parents died, William helped me to continue the always uncertain movement in the direction of the Unknown. I found his ongoing quest for deeper understanding, and a renewed commitment to ‘that what is most important’ (Plotinus) both refreshing and inspiring. I always came away from our many talks with something to think about. I will miss him greatly.

He was a man to remember and his life, one to celebrate.  To hear his voice a final time call his office:  323.658.8515.  The great currency of the rare book field is spirit.