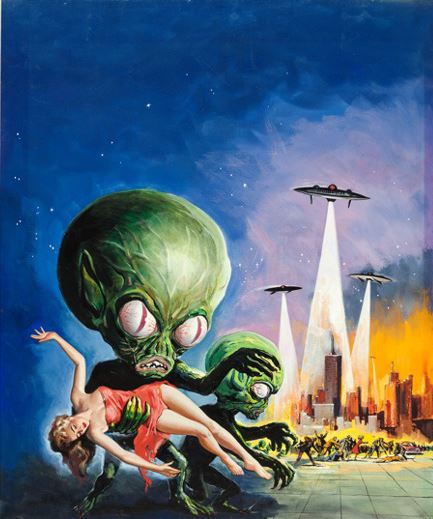 The invading saucer men stop by for a visit to the Top 500 (Heritage Auctions photo).

Another year has come to a close, meaning it's time to look back at the Rare Book Hub Top 500 auction prices in the field of books and paper for the year 2017. The high end of sales was a little softer this time. Nothing matched last year's high price of $5.6 million, let alone previous years when the Bay Psalm Book and Audubon's Birds of America pushed the top price into double digit millions. This year, the best that could be mustered was $1.8 million, the lowest high in many years.

One totally new development was how dispersed the most expensive items were by auction house. The previous year, the top 9 items were apportioned between Christie's and Sotheby's, reflective of how it had been for years. This year, only three of the top 10 went to the two majors, with the top four coming from Blanchard's, Winner's, Aguttes and Alde. It will be interesting to see whether this trend continues in 2018, or we revert to form.

In 2017, the trend to more of the big dollars going to contemporary, some might say trendier, forms of paper continues. Comics, whether rare, early editions, or the artwork and boards used to create them, take up a major part of the list. Few of these are Disney comics. They are mostly superhero or underground comics. I will admit to never having heard of many of these comics that brought in hundreds of thousands of dollars. Robert Crumb was particularly popular. Oh, there were some book illustrators too. E. H. Shepard is here – once. Someone else will have to take on the task of counting all of Crumb's appearances, or those of Hergé, who seems to be everywhere on this list.

We did see one contemporary book which did not have the word "comic" before it make the list. Harry Potter is here twice to show us traditional books are still alive.

Also of increasing popularity are movie posters, one sheet announcements of classic, and not-so classic films. And then there are baseball cards, those things many of us used to flip years ago. Who knew we were gambling hundreds of thousands of dollars? Certainly not our mothers, who threw them away.

Of a classic, rather than contemporary nature but highly popular are the pages from one book. Not the Bible, though many copies of it still appear. Rather, there are many individual plates from John James Audubon's first edition of Birds of America. These are very desirable and regularly go for high prices.

Before we get to the Top 10, we will look at a few of the interesting, sometimes unusual items a little farther down the list. However, nothing comes across nearly as strange or macabre as one that fell a little short at a mere $56,301 – Lee Harvey Oswald's toe tag. Yes, that is, technically speaking, a work-on-paper. At the end of this article, you will find a link to the complete Rare Book Hub Top 500.

#431. This is an amazing letter from Alexander Hamilton to his future wife, Elizabeth Schuyler, that we feel compelled to quote at length. Hamilton had only recently discovered the treason of Benedict Arnold, and he and George Washington had to inform Arnold's wife, Peggy Shippen, of his treachery and his escape to the British side. He writes of the distraught Mrs. Arnold, "I saw an amiable woman frantic with distress for the loss of a husband she tenderly loved—a traitor to his country and to his fame, a disgrace to his connections. It was the most affecting scene I ever was witness to. She for a considerable time intirely lost her senses. The General went up to see her and she upbraided him with being in a plot to murder her child; one moment she raved; another she melted into tears; sometimes she pressed her infant to her bosom and lamented its fate occasioned by the imprudence of its father in a manner that would have pierced insensibility itself. All the sweetness of beauty, all the loveliness of innocence, all the tenderness of a wife and all the fondness of a mother showed themselves in her appearance and conduct. We have every reason to believe she was intirely unacquainted with the plan, and that her first knowlege of it was when Arnold went to tell her he must banish himself from his Country and from her forever. She instantly fell into a convulsion and he left her in that situation." Peggy Shippen Arnold was a great actress. She had likely been a British spy longer than her husband, perhaps brought him in, worked together with her husband in his treason, and later escaped to the British side too. It was all an act. Hamilton fell for it. $81,250.

#370. Since comics are so well-represented, here is one that is not representative of them. Rather than a more contemporary style, it is a board for a very early newspaper strip, Little Nemo in Slumberland, by Windsor McCay in 1908. Robert Crumb is among the many who have cited McCay's work as influential. $89,625.

#349. Thomas Jefferson writes Georgia Governor John Milledge in 1803, shortly after the Louisiana Purchase. Writes Jefferson, "The acquisition of Louisiana will it is hoped put in our power the means of inducing all the Indians on this side to transplant themselves to the other side the Missisipi, before many years get about." I did not know this idea started so early, or with Jefferson. It would conclude three decades later under Andrew Jackson with the horrific "Trail of Tears," though this was not the result of inducement, as per Jefferson, but of brutal force. $93,750.

#284. We said not all of the film posters were for classics. This is artwork by Albert Kallis for a poster for the 1957 film Invasion of the Saucer-Men. As an aside, Kallis was also one of the founding partners of the International House of Pancakes. $107,550.

#88. There are numerous Nobel Prize medals expensive enough to qualify for this list, only Nobel Prizes don't belong with a list of works on paper...except this one. It is for the Nobel Prize in Literature awarded to Doris Lessing in 2007. $251,250.

#59. If you are looking to complete your collection of signers of the Declaration of Independence, what will it cost to obtain the rarest, Button Gwinnett? The answer is $319,500.

13. Columbus Letter. An early edition (Basel 1494) of Columbus' report on the discovery of the New World. There were numerous early editions, but few copies of any of them survive. This is the Menzies copy, sold at sale of William Menzies in 1876 for $100. $751,500.

#11. Discorsi e Dimostrazioni Matematiche (1638), where Galileo introduces the sciences of materials and motions. Galileo would have made it into the Top 10 were it not for... Tintin. Alors! $793,432.

10. Tintin en Amérique, by Hergé (Georges Remi). Tintin has taken up permanent residence on the Top 500 list. This is a drawing of Tintin on the running board of a car in Chicago for the 1937 edition of Tintin in America. Based on the price, Tintin must have been the most important French visitor to America since de Tocqueville. $798,180.

8. Officium Beatae Mariae Virginis, ad usum Romanum. An illuminated Book of Hours circa 1483 by the humanist Bartolomeo Sanvito, produced for a wedding uniting the powerful Sforza and D'Aragon families. $885,000.

7. Autograph manuscript notes by Mao Zedong, late in life, concerning his love for classical literature and poetry, along with notes by a professor who assisted him in his ill, later years on the subject (1975). $916,175.

6. Quinte-Curce, Faiz Et Conquestes d'Alexandre (History of Alexander the Great), circa 1470-80. This is an illuminated manuscript on parchment and paper. $990,080.

5. On the Origin of Species by Means of Natural Selection, by Charles Darwin. Long lost copy of Darwin's sheets of the third English edition (1861) with notes for revisions sent to his German translator for the second German edition. These changes would then be made to the fourth English, this being the definitive text of Darwin's work. $1,056,925.

2. Albert Einstein Manuscript Note. "A calm and modest life brings more happiness than the pursuit of success combined with constant restlessness." Einstein gave this note to a courier while in Japan because he had no cash for a tip. He told the courier that some day it might be more valuable. This note was not the greatest observation of Einstein's life, but he was right about the value. $1,560,000.

1. The Declaration of Independence. Written in 1776, primarily by Thomas Jefferson, this is the founding document of the American nation. It was first printed July 4 in Philadelphia, but there were no large printings in its early day. Rather, it was printed locally for dissemination throughout the colonies. This was the first New York printing, one of the earliest (July 9), known only in five copies. $1,800,000.

Note on this list: What appears on the list has changed over the past decade and a half since we began compiling it. Once overwhelmingly books, all sorts of other forms of paper now fill the list, manuscripts, letters, pamphlets, broadsides, various documents, even comic books (thank you, Hergé) qualify. Trickier are prints and photographs, which may also qualify. We say "may" as we try to filter out those primarily of artistic merit. It's a fine line, one where Audubon, whose "prints" are generally plates from his Birds of America, make the cut, but Andy Warhol and Pablo Picasso's do not. Otherwise, the enormous prices they bring would dominate the list. With photography, we will include very old photographs and those capturing historic events, while modern artistic photographers are excluded for the same reason as Warhol and Picasso. Artworks and photography that are "worth a thousand words" are the type we include, while those more of artistic beauty than a historic account are not included. However, artwork that is in book form (a bound edition as opposed to a loose portfolio) does meet the test. So do original illustrations for book or cover art. We realize it is a thin line.

It is possible we may have missed something. We follow around 200 auction houses and occasionally something can be missed. We apologize and certainly no slight is intended.