Who Owns the Rosetta Stone? 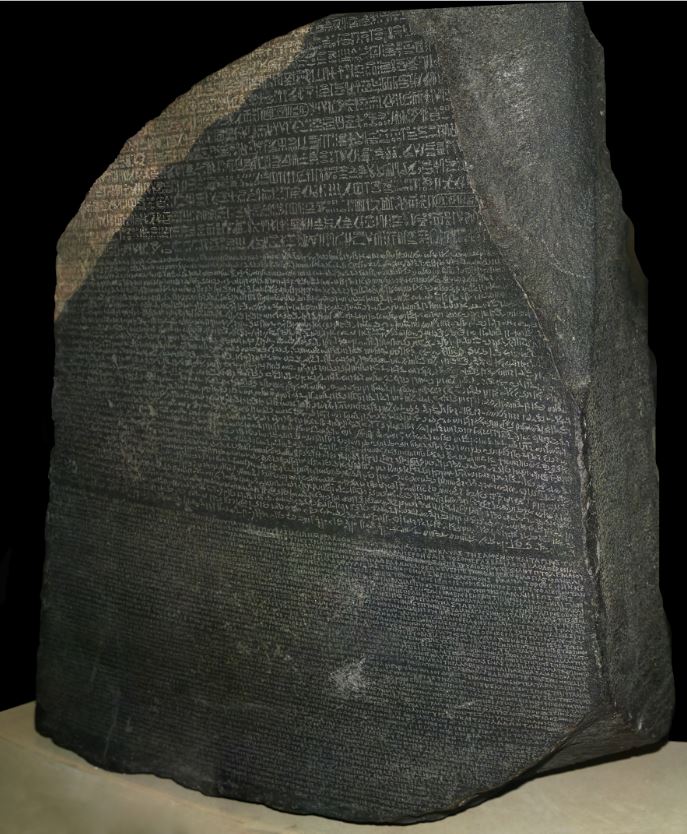 There are few "manuscripts" (but not works on paper) from antiquity more important than the Rosetta Stone. Discovered in Egypt in 1799, the Rosetta Stone was the key to deciphering the meaning of Egyptian hieroglyphs, ancient writings that told the history of that land during the time of the pharaohs. Up to that time, this wealth of history remained totally incomprehensible to anyone from our times.

The writings themselves on the stone were not of monumental importance. It was a decree issued by the King in 196 B.C. What made it so important was that it was written in three languages, which included ancient Egyptian and Greek. Greek was understood by contemporary scholars. Since the decree was identical in each language, it allowed them to translate ancient Egyptian words into understandable Greek ones. It was the key that unlocked the mystery of all those previously incomprehensible Egyptian writings.

At the time of the Rosetta Stone's discovery, Egypt was occupied by France. Napoleon was out to make a name for himself by seizing the country from the Ottoman Empire. The future French leader brought all sorts of scholars along with him, including archaeologists, to prepare a detailed description of the land. His control of the country did not last long. He was forced to retreat in 1801 by the British, a defeat that did not disrupt his burgeoning career back home. By 1802, the Rosetta Stone was in the British Museum. It was one of countless artifacts removed from native countries by colonial powers. Whether such represents a legal transfer at the time or a looting of a nation's cultural heritage is a raging debate today. It concerns issues legalistic, cultural, ethical, and preservationist. This is not a debate we wish to wade into at this time.

Fifty years ago, concerns about the looting of ancient artifacts and cultural icons began to grow. The colonial era was effectively over, and the former colonies, having seen so many of their cultural icons removed in earlier eras, sought to protect those remaining. In 1970, UNESCO (United Nations Educational, Scientific and Cultural Organization) adopted a resolution to protect such items from being removed from a country illicitly. Many countries responded with blanket laws making the removal of any such items illegal, thereby making removal of any and all such artifacts going forward illegal. The existence of any such law in itself provides the necessary proof that antiquities removed from that day forward must be returned. However, this resolution does not really address the issue of artifacts removed prior to 1970.

While the UNESCO resolution provided much assistance to nations in stopping ongoing looting, the major issue of that day, many of those countries are now looking farther back. After all, that was when many of the most important artifacts were taken, though under the cover of the laws of colonial authorities, whose rule was never accepted by the people of these lands. Egypt is one such country, and one of the items on their list is the Rosetta Stone. Egypt has been able to gather many such items back from the nations where they ended up. Foreign authorities and institutions have often been fairly cooperative. However, where they often draw the line is in returning the most important of artifacts, and few are more important than the Rosetta Stone.

Egypt has made numerous requests, but neither British authorities nor the British Museum have been receptive. Egypt at one point said they would settle for a three-month return as part of a major exhibition. The British Museum did not acquiesce to (fall for) that one. The Rosetta Stone remains at the museum where it is the most popular item on display.

Recently, Egypt's Minister of Antiquities, Khaled El-Enany, had to report on the futility of using the Convention on the Means of Prohibiting and Preventing the Illicit Import, Export and Transfer of Ownership of Cultural Property 1970 as a means to their end. Ahramonline, the English language version of Egypt's major newspaper, reported that El-Enany told the Members of Parliament, "The UNESCO agreement which Egypt signed in 1970 stipulates that an ownership document is a prerequisite in order to be officially able to recover smuggled antiquities. For this reason, we have not been able to recover the Rosetta Stone which was smuggled into England in the 19th century." Naturally, there is no contemporary document establishing Egyptian ownership since the authorities at that time were British.

El-Enany said that Egypt has recovered many artifacts and will continue to seek repatriation of others. My guess is the debate over ownership of this most important "manuscript" will go on indefinitely. It is hard to imagine either side blinking any time soon. A solution isn't obvious, but the likelihood of this debate going away appears small.