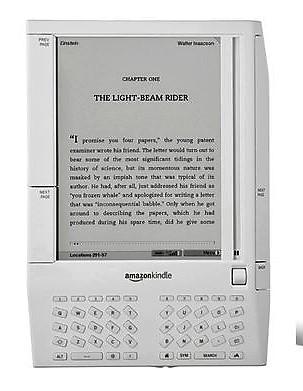 Kindle, Amazon’s e-reader first introduced in 2007 turned ten in 2017. Though Kindle is credited with bringing portability and broad based popularity to a single function electronic device, the history of e-Books really stretches back to the 1930s. An informative article on that subject by the Government Printing Office blog can be found at:

A detailed recap of the place of Kindle in the digital revolution just appeared in Wired: www.wired.com/story/can-amazon-change-books/

A decade ago the Kindle was the latest and the greatest in the world of book technology, but in March 2017 the Guardian reported sales of e-Books shrinking by 4% in the UK while sales of physical paperbacks rose by a similar amount. The site said, “The e-reader itself has also turned out to have the shelf life of a two-star murder mystery.” Smart phones and tablets last year (2016) overtook dedicated reading devices to become the most popular way to read an e-Book, according to the research group Nielsen. The Guardian attributed the shift in part to pricing strategies which had made e-Books comparatively more expensive and their opinion that “some things like humor and cooking are “simply better in print.” … “Despite the digital market’s rapid wax and wane, the industry does not expect e-readers to join MP3 and MiniDisc players in the tech dustbin." The devices,” the article said, “are still prized by prolific readers – a group that is predominantly female and over 45, and devours romance and crime novels.”

The following month the Guardian took another swing at the Kindle, pronouncing the object itself “Clunky and unhip,” while at the same time commenting that while e-Book sales may have leveled off, traditional publishers were using the format as a marketing tool and a way to provide snippets of new books.

On this side of the pond Forbes noted an even more dramatic dip reporting the sale of e-Books down 17% in the first three quarters of 2016 according to data released by the American Publishers Association in Feb. 2017. Forbes and other sources attributed the decline to the shift to the mobile phone and tablet as preferred devices and to a lesser extent the rise audio and an increasing interest in podcasts and other platforms.

Real Books are Back

Real books are back crowed MONEY in April. The site reported that according to the Pew Research Center, 65% of Americans said that they read a printed book in the past year, compared to only 28% who read an e-book. They neglected to mention that comparatively few Americans read any books last year.

By May the LA Times did a more nuts and bolts analysis of the status of the e-Book and reading devices, also noting substantial declines.

Drowning in lists of the best books of the year? Don’t have time to read them all or know where to start? Fear not! In December Lithub put out what they called their “Ultimate List," going through 22 Best Books lists and coming up with the names of books that appeared most frequently and on the greatest number of lists.

The 2017 titles with the most overlapping recommendations were:

On 22 lists: Lincoln in the Bardo, George Saunders

On 14 lists: Killers of the Flower Moon, David Grann

Lithub also consulted a wide spectrum of bookish types to ask for more subjective preferences. That list appears as Favorite books of 2017:

In the age of Trump how could we fail to mention the truly YUUUUGE!!! events of the year gone by?

Leading the pack in cultural artifacts, but unfortunately not a book, was the much remarked sale of a Leonardo da Vinci painting for $450 million at Christie's in November.

Far behind, but still notable an original manuscript copy of the Book of Mormon set a record price of $35 million:

And Harry Potter (of whom there is more to be said) stayed in the news when a first edition brought a remarkable price of $81,250 in a September Dallas auction: www.finebooksmagazine.com/press/2017/09/harry-potter-first-edition-sets-world-records-at-heritage-auctions.phtml

ABE listed three quarters of titles that brought top prices on their site:

Both BookFinder and Finebooks put out lists of the most frequently searched out of print books. Though both of these lists are slightly out of date and reference 2016, they still provide an indication of what is generally popular with prospective buyers

The Bookfinder list of most searched for 2016 came out in first quarter 2017:

Similar data reported in March of 2017 by Fine Books Magazine:

What year would be complete without a daring heist of rare and valuable books? This years bookish biggie came during February with a warehouse break-in near London’s Heathrow where a gang made off with 160 items valued at over 2 million pounds in a daring “Mission Impossible” type caper.

Highest paid authors  2017: No surprise JK Rowling leads the pack with a whopping $95M. Forbes lists many others with seven figure incomes at:

Still haven’t had enough Harry Potter? The British Library marks the 20th anniversary of the first publication of the boy wizard with a blockbuster show on the history of MAGIC that runs through Feb 28, 2018.

Net Neutrality much in the news in late 2017 looks to carryover into 2018. This article ponders how it will affect public libraries.

Consolidation and closing of special collections as digital libraries accelerate

Reports continue of downsizing the actual physical facilities and collections in favor of their digital cousins. Traditional book people view this trend with alarm. See what the Chronicle of Higher Education had to say just a few weeks ago in December about University of Wisconsin at Madison plans to close 22 libraries and create six “hubs”.

So far there hasn't been much forecasting. What we did find was scant:

Those who did care to speculate included Scholastic's forecast in book trends for kids .

Industry projections on a subjective basis

Here are a few thoughts  by individual agents and publishers’ representatives in Kirkus Review.

Now for something entirely different

Flipping: If you’re giving up on all previous traditional models for the ancient and honorable tradition of book selling you might want to try the 21st century techniques of the bookflipper (who does it with FAB - Fulfillment by Amazon) and aps. Consider the current business model that reduces everything to spreadsheets and math formulae. This method is hawked by a dude who calls himself the “Book Flipper.” (Writer's note: It’s come to that ... picture older lady dealer wringing her hands and weeping over the keyboard):

And a Youtube video -- long and one of many. Just think you can wear a handheld scanner on your wrist (My mother is turning in her grave): www.youtube.com/watch?v=R6BEUx3vPUE

On a more creative and hopeful note here’s one dealer’s plug for Instagram as a profitable and direct platform of the future. This commentary puts forward a more imaginative and creative use of the new technology and a good reason to give Instagram a try.

Mental floss did a listicle in November on “13 secrets of Rare Book Book Dealers.” Take a look - who knows, you might learn something.

Are we rich yet? Well probably not. That said, a Happy and Profitable New Year from all of us at Rare Book Hub where we’re looking forward to another fast paced and interesting year in the world that is still mostly paper though the vehicle may be digital.

RBH writer Susan Halas is based in Wailuku, Maui (wailukusue@gmail.com). She welcomes your comments and actual in person visits (with advance notice please).