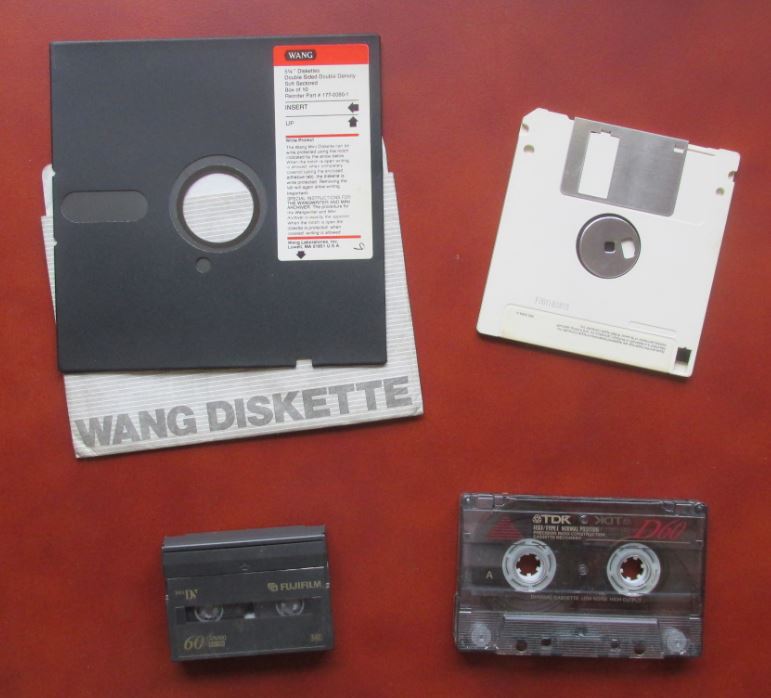 There may be some important data on these disks and tapes, but I will never know.

It is a given that electronic formats are superior to printed books for ease of use and document preservation. For ease of use, they can be accessed from anywhere via the internet, sent via email halfway around the world in seconds or less, searched in a fraction of a second for words within thousands of pages. Printed documents require visiting places where they are stored, maybe thousands of miles away, sending by old-fashioned "snail mail" which takes days unless one wants to pay exorbitant shipping costs, and searching within thousands of pages means laboriously digging through each one of them.

In terms of preservation, electronic copies can be stored away in a computer somewhere forever, always available at the flip of a switch. For safety, you just create a backup file somewhere. Books deteriorate with age, become frazzled, torn, perhaps destroyed by fire or water. Maybe they are lost or stolen. Who on earth would want to rely on printed or manuscript documents anymore? It's an open and shut case. Or is it?

A recent article in Scientific American reminded me of a problem we have all encountered, though I never really thought much about it. That 500-year-old book may be worn and tattered, but you can still read it. How about that 20-year-old electronic document? How many electronic documents, videos, or whatever created 20 years ago can you still access? Many are subject to a double whammy – storage hardware that no longer works and software that cannot be read by anything still available today. Undoubtedly, you have such material stored away on some old format that you will never be able to read again. It probably sits around on some shelf or filing cabinet because you can't bring yourself to throw it away, though the readers you need to open it broke down years ago and finding replacements for electronic products discontinued years ago is next to impossible.

We have a mess of old movies. They are on VCR tapes. The VCR broke down a couple of years ago. I can't imagine what it is like for someone with Betamax tapes. Maybe I could sell my old VCRs to Blockbuster?

I have two formats of tape from old video cameras we had when the kids were growing up. The older tapes were relatively large, the newer ones very small. I have nothing that plays either. Fortunately, I have a nephew who works in tech who was able to transfer the highlights to DVRs a few years back. How much longer will anyone be playing DVRs? That is a fading technology. It's like the CDs that fit in my computer. It is old enough to still have a slot for CDs, but who uses them any more? They don't hold much. The "record stores" that used to sell music on CDs don't exist now because no one buys those anymore. I can still stick those in my 2005 model car, which had the amazing capacity to play five of those in a row. Advanced technology. My kids no longer even listen to the later technology MP3 players in their cars to hear music. They just wirelessly connect it from their cellphones which store something like 30,000 songs, or access Spotify and connect to the speakers via Bluetooth.

None of this even goes back to tape players (yes, I still have some audio tapes and nothing to play them), reel to reel tapes (I even have a couple of those), though amazingly, vinyl records have made a comeback among a certain group. I think the newer record players can handle 33 rpm, maybe 45s, but I even have some old 78s inherited from my parents. Good luck with those. You can't even play them at a slower speed since 78s require a different needle.

Turning more to textual documents, I have a bunch of floppy disks remaining. I have the newer 3-inch ones and even a few of the 5-inch disks. I can't play either. Even if I could, would I have the software that could open them? The Scientific American article indicated the writer could not open documents in the original Microsoft Word format with the current version. He thinks that's a problem? Mine weren't even in Word. I'm not sure which format, maybe WordPerfect or Lotus WordPro. Do those exist anymore? I also have spreadsheets in Lotus 1-2-3. I know that software disappeared years ago. I may even have some in Quattro Pro, which I used back in the 1990s. Does that still exist?

As for my 5-inch floppy disks, if I found something which could play them, and I haven't had such a thing in at least 25 years, I would still not be able to open them, even with an early Word program. They were created on a Wang computer using Wang's proprietary software. Does anyone have a spare Wang PC? Wang went bankrupt in the early 1990s, but abandoned their own software even earlier. Prior to that, I wrote documents on a Wang mainframe. It used disks as large as truck tires. No need to send me your old Wang mainframe as I no longer have any of those disks.

In sum, I have no electronic files from the 1980s or 1990s I can still access, and not much from even the 2000s, but if I had a 1455 Gutenberg, I could still read it. Unfortunately, while I have lots of floppy disks, audio tapes, and VCR tapes, I do not have a Gutenberg.