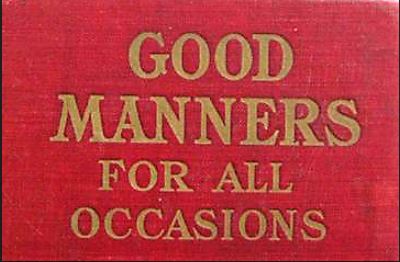 “Courtesy to the trade” has many meanings in bookselling.

“Courtesy to the trade:” That’s the old school way of saying that a dealer will give a discount or be more flexible in pricing and terms if you declare yourself as a fellow bookseller. The best way to find out is to politely ask up front if any trade benefits are offered.

If you’re an older dealer you know the drill. If you’ve come more recently to bookselling or only know it in its Internet incarnation, remember that “courtesy,” aka discounts and other benefits, are optional and not mandatory and that there are many different versions of what kind of a deal you can expect as there are dealers. So make sure to spell out the specifics whether you are a buyer or a seller.

In prior times, when shops were real instead of virtual, it meant prospective buyers called in advance to make an appointment and brought cash. On the buy side they mentioned up front they were in the trade and were looking for a discount and did not wait until the very end after a dollar amount had been discussed to try to shave the price by asking for a trade discount - definitely bad manners and not appreciated.

Even in the Internet age some things never change: Booksellers still dote on cash or cash equivalents. They still like to sell by the lot. They still enjoy seeing boxes go out the door as visions of dollars, euros or yen float in their head.

In the old days the favorite way to indicate this was to say to the buyer: “Why don’t you make a pile,” which meant in American English, “I will price these books as a lot once I see what you actually want. Therefore you can mostly ignore the individual prices penciled in each volume. The final price will be based on how many you take and what you offer in cash to take them all away with you right now.”

The internet version of “making a pile” is to identify yourself as a fellow dealer and ask if there might be a better price if you take a substantial number of books. The standard discount to the trade is usually about 20%, but that is not firm and it can go up or down depending on the parties and the value of the transaction.

In the etiquette department it is OK to haggle, but the object of the discussion is to come up with an offer that is good for both sides, not to beat the other party down.

It is never OK to denigrate either the merchandise, the buyer or the seller. Remember that while a certain amount of negotiating is enjoyable, too much and too cut-throat is a turn off. My dad’s rule was when he reached his limit his prices went up, steeply up, not down.

When doing business with a fellow dealer, especially an area specialist, it’s never out of line to mention you have something interesting or unusual to trade. If you do have such an item or items, bring it with you, or mention it in your email and send a few photos. If you’re shopping in person a business card, a current catalog and a small token of your esteem is never unwelcome.

In the manners department for live visits don’t bring rambunctious little kids, a bored spouse or a gabby friend. It never hurts to bring your own boxes.

Also in the manners department no matter how slammed you are always acknowledge a quote or an offer, even if it’s not solicited, even if it’s not for you, an email back saying “Thank you for thinking of us” is always in order.

And then there’s shipping.

Remember that while the price of the books and book related material may be negotiable, the cost to pack and ship them is seldom (make that never) included. Be prepared to pay shipping at actual cost plus labor and insurance if necessary. Shipping is not negotiable and it’s not included, so don’t ask the seller to include it. Show you are a pro and don’t go there.

Also not negotiable are credit card surcharges and Paypal fees, the seller is going to factor those in and pass those costs along to the buyer, every penny - no exceptions, so if you don’t want to pay the vig use cash or check.

Can these books be returned? You’ve got to be kidding. There are no returns on discounted deals. That means inspect the merchandise before you take it and expect if you buy a substantial quantity some will exceed your expectations and others might not be up to par. It is also unlikely that you will get an itemized receipt or invoice. The better the deal the shorter the paperwork.

This rule is sometimes bent if the buyer is really unhappy, or some important fact was omitted from the initial discussion, but those circumstances have to be compelling and it almost always means you won’t do business with each other under favorable terms again.

For people who have known each other a long time and have done business frequently there are sometimes situations where one party just gives the other party the merchandise and gets paid the agreed upon percentage as they sell. In those situations there are no records or paperwork. It’s unusual even to get a receipt. It’s all on the honor system; if it works it goes on for years and provides a steady stream of income and/or inventory for both sides.

Just remember as some of us older folks move into the geezer bracket -- if one or the other kicks the bucket it can be truly hellish to sort out who owns what. Anyone who remembers the late Peter Howard of Serendipity in Berkeley knows that after his death it was very difficult to determine what belonged to him and what he had on handshake consignment from others. Your heirs will not appreciate it, but that doesn’t mean a lot of old timers don’t do it this way.

Another thing to bear in mind is that those letters after a bookseller’s name are an important character reference. Maybe you don’t belong to the the ABAA, or any of the other trade associations, but the fact that person you are negotiating with does usually signifies that they are likely to uphold basic professional standards.

We’ve all been in the scenario where you receive an offer and you don’t want the books at any price, not even free. Just say so politely. Don’t run down the books, or the person offering them. You don’t need to give a reason beyond, “I don’t think they’re for us.”

I seldom bring books in on consignment from other dealers. I prefer to ask for a fee on referral leading to sale. That usually means you know someone you think will buy something expensive, the only problem is you don’t happen to have that item in stock, but you know someone else who does.

My experience is it’s easier to ask for a referral fee for introducing a potential buyer to the seller. Asking for a referral fee takes less time and exposes you to less risk than taking the expensive book on consignment. A referral fee, like a discount is not automatic and the amount varies from a fixed sum to a percentage of the selling price. A referral fee is only paid after the sale has concluded, and the terms are always set up and agreed to in advance. No advance agreement - no referral fee.

Sometimes it’s worth it to pay extra. People who like to do business with each other often sweeten the initial deal with a post transaction monetary boost. Did you make serious money on the lot? Did something you got from a fellow dealer turn out to be a bonanza? One way to express your appreciation is to send some extra dollars along as a thank you. This is not mandatory, but it helps people remember you as a good dealer and as you probably already know nearly all dealers believe in karma.

Deals made at shows are seldom typical deals. First of all the prices at the shows are either very high or very low. If low you won’t need to haggle. If high, you won’t want to buy, but you might want to get better acquainted. I have been to many shows, but I can only remember one or two of the snooty variety where I got something spectacular at a good price, and that was not during the show, it was before or after.

Packing: I hate when people send me things that aren’t carefully packed. Even if the items arrive in good shape it makes me not want to buy from them again. If you’re going to call yourself a bookseller learn how to pack, and pack everything you ship the way you’d like to receive it.

And a final cautionary note: If you have any reputation at all as an "expert," customers and other dealers will come to you asking for an “appraisal.” The word “appraisal” never leaves my lips. I always use the term “evaluation,” sometimes in combination with the word "free." I say up front I’m not an appraiser and recommend if someone actually needs an appraisal for insurance or other purposes, that they consult with someone who is an actual professional appraiser and to expect to pay a fee for that service.