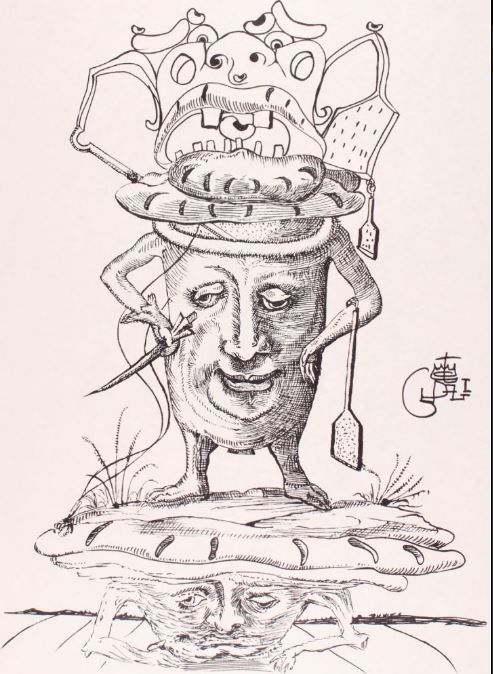 Dali's interpretation of one of the fantastic creatures from Les Songes Drolatiques de Pantagruel.

8. Leviathan, or, the Matter, Form, and Power of a Common-Wealth Ecclesiastical and Civil, by Thomas Hobbes. Hobbes writes during the English Civil War (1651) for a social contract between government and the people, but under an all-powerful monarch. $8,577.

7. Alice's Adventures in Wonderland by Lewis Carroll. This is hardly a first edition, its 1969 date over a century later. However, it is the edition illustrated by Salvadore Dali, with original woodcuts and an etching. $8,800.

5. A Collection of Letters from Hubert Lyautey to his editor Max Leclerc. Lyautey was French Resident-General of Morocco from 1912-1925, nicknamed the "Maker of Morocco," who appeared on the cover of Time Magazine in 1931 as an "empire builder." $9,659.

3 (tie). A Discourse and Discovery of Newfoundland, by Richard Whitbourne. Known as the "Father of Newfoundland," Whitbourne first traveled there in 1579 to hunt whales and trade with the natives. He became an enthusiastic advocate of colonization. This is a revised second edition from 1622. $10,000.

3. (tie). Oxford Night Caps Being a Collection of Receipts for Making Various Beverages Used in The University, by Richard Cook. This sounds like a lot of money for a cocktail book, but AbeBooks explains, it is "a pioneering book for all drinkers and bartenders. First printing of the first known cocktail book to be published in the English language from 1827." Just 38 pages, it was prepared to help Oxford students with their social life. $10,000.

2. The Day of the Triffids, by John Wyndham. The 1951 first UK edition of the science fiction thriller about killer plants, inscribed by the author. Eat your vegetables before they eat you. $13,844.

1. Les Songes Drolatiques de Pantagruel, by Salvadore Dali. This is a collection of 25 images adapted by Dali in 1973 from the Songs of Pantagruel, published in 1565. The original consisted of 120 images of grotesque semi-human creatures. It was published by Richard Breton under the name of Francois Rabelais, author of Gargantua and Pantagruel, but it is unlikely Rabelais had much to do with this book since he died a dozen years earlier. $16,840.