Dear Mrs. Trump – A Librarian's Snarky Attack on the First Lady and Dr. Seuss Not a Great Moment in Library Science 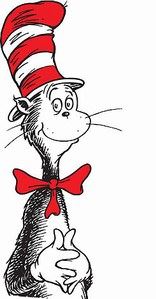 Of what race was the Cat in the Hat? Black? White? Feline?

A Massachusetts librarian managed to deliver an embarrassing blow to what was presumably her cause, tolerance and racial justice, with one of the more inept public attacks you will ever see. Her obvious target was the President, fair game for criticism, but instead attacked his wife and an American icon, Dr. Seuss.

It all started harmlessly enough. First Lady Melania Trump sent out a letter in honor of National Read a Book Day. In it, the First Lady emphasized the importance of reading and noted she was recognizing a school in each state that "achieved high standards of excellence." In Massachusetts, the school selected was Cambridgeport Elementary School in Cambridge. Along with the recognition each school would receive ten books, all by the wondrous Dr. Seuss.

Reading is a good, thoroughly noncontroversial cause. It's the type most First Ladies have settled upon. Laura Bush was a heavy promoter of reading. This was not enough for Ms. Soeiro, who in the name of sensitivity issued a most insensitive reply online, one mercilessly picked up by the press across the nation. After beginning with a sarcastic comment about how "expensive" it must have been to send the books by second-day air, she went on to lecture the First Lady on ethnic diversity, socioeconomic status, gender, differing abilities, per pupil spending, free all-day kindergarten, white supremacy and the miserable policies of the Secretary of Education, whom Mrs. Trump did not appoint. She pointed to libraries in inner city schools being closed, not a problem in this wealthy Boston area community that is home to Harvard University. She exclaimed that her school did not have a "NEED" for these books, undoubtedly true, but ten books with the First Lady's seal is evidently more like an award certificate than an attempt to build a library.

If this wasn't bad enough, Ms. Soeiro then proceeded to lambaste Dr. Seuss. She explains to the First Lady something I did not know either - "You may not be aware of this, but Dr. Seuss is a bit of a cliché, a tired and worn ambassador for children’s literature." Those are fighting words. I don't think it's Dr. Seuss who is the tired cliché here. The good doctor was beloved not only by me but my children as well. If today children don't appreciate him, which I cannot believe, then they are missing the most important part of their young lives – childhood. He did more to get children to read then probably anyone else on earth. Perhaps if Ms. Soeiro had to endure Dick and Jane as a child in school she would better appreciate just how wonderful this man was.

The librarian then continues, "Another fact that many people are unaware of is that Dr. Seuss’s illustrations are steeped in racist propaganda, caricatures, and harmful stereotypes. Open one of his books (If I Ran a [sic – the] Zoo or And to Think That I Saw It On Mulberry Street, for example), and you’ll see the racist mockery in his art." No longer possessing those books myself, I would go to the library to check them out and see, but either they got rid of them, or it must be a racist institution I wouldn't want to patronize. She cites a book entitled Was the Cat in the Hat black and another titled Is the Cat in the Hat Racist? The answer is of course he was. After all, he wears a top hat, bow tie, and white gloves. What could be more racist than that? Never mind that Abe Lincoln wore a top hat, Bill Nye a bow tie, and Mickey Mouse white gloves. Apparently, these are indicia of blackface minstrel shows. Still, I think I would be less offended by someone wearing a top hat than by someone saying the Cat in the Hat looks like people of my race. He barely even resembles someone of the feline race let alone the human race. And he wore whiteface.

Now Dr. Seuss, like all of us, was a product of his times. George Washington owned slaves, Abraham Lincoln did not free the slaves until three years into the Civil War, one Roosevelt was an imperialist, the other interred the Japanese. All were ahead of their time in terms of humane and compassionate sentiments, but they were not perfect. So should we smugly condemn them for failing to meet today's standards? You can be certain that our descendants, 100 years from now, could similarly condemn us for behavior we do not even see as wrong from the vantage point in which we live. Seuss was actually way ahead of his time in terms of being progressive and tolerant, and a bizarre target for a thinly veiled attack on President Trump. In the days before the Second World War, he churned out many cartoons forcefully attacking the original "America First" movement. This despite the pro-Nazi movement being concentrated with ethnic Germans, just like Theodore Seuss Geisel himself. Seuss did not see Nazi sympathizers as "fine people." Believe me.

He was not only sympathetic to Jews, he was to African-Americans. That leads us to a specific criticism. In the 1930s, before writing his books, he did some advertising drawings which depicted Africans in a stereotypical, demeaning manner. That was common in his day and even black entertainers of the era performed in ways that would be considered demeaning today. Mulberry Street depicts a Chinese man in stereotypical dress with a set of chopsticks, and this has led to calls to remove a mural containing this image from the Seuss Museum. But, even when I was growing up in the 1950s and 1960s, Irish comedians still played drunkards, Italians gangsters. When boys and girls played doctor and nurse, the boys were always the doctor, the girls the nurse. Were we all misogynists? By today's standards, yes, but none of us, girls included, saw anything wrong. It took the women's movement to open our eyes to understanding the subtle harm to the stereotypes we were unconsciously promoting. People need to be judged within the context of their times.

Dr. Seuss did have one blind spot for which criticism is fair. During the war years, he let his anger at Japan spill over to unfair attacks on Japanese Americans. He portrayed them as disloyal and supported their internment, one of America's darker episodes. Of course, so did Franklin Roosevelt, a very progressive President, and many other Americans, caught up in the hysteria of war. He should have known better. Even in those times, that was too far, though in the 1950s, when boys played war games, we were still fighting the "Japs." Seuss' attitude toward the Japanese slowly evolved, and a decade later he visited Japan and dedicated his 1954 book, Horton Hears a Who!, to a Japanese friend. That is a book whose message is steeped in tolerance, just as The Lorax presents a powerful environmental message. Perhaps unlike some of today's pro-diversity books, Dr. Seuss may have imparted that message in a way that better reached the young, as he also entertained them and encouraged their imaginations to run wild. Dr. Seuss was a good man who changed with the times. Do not denigrate him.

Returning to Melania Trump's books, it should be noted that the Cambridge school system quickly issued a message saying that while Ms. Soeiro had a right to express her views, the decision on whether to accept or reject the books was not hers to make. As for Mrs. Trump herself, she seems to be a decent and well-meaning lady. She did not grow up in America and probably does not understand all the nuances of our culture and politics. I grew up here and I haven't mastered them all. It undoubtedly never occurred to her that giving some books out as a reward to high performing schools could somehow be construed as evil. If this was an opportunity to point out the greater needs of poorer schools, that could have been done with a helpful, respectful reply, not a snarky one. If Mrs. Trump doesn't understand all the nuances of American sensitivity, she has spent her years here with a husband who probably doesn't teach sensitivity all that well. If a day goes by where he doesn't say something to offend me, I worry that he has taken ill. Attack her husband all you like, leave the family alone. Instead of helping the cause of tolerance, you set it up for ridicule. That is not helpful. Liz Phipps Soeiro, will you please go now.