Used Bookstores Are Back: The Published Page - Large Bricks & Mortar Shop Opens Near Ft. Worth. 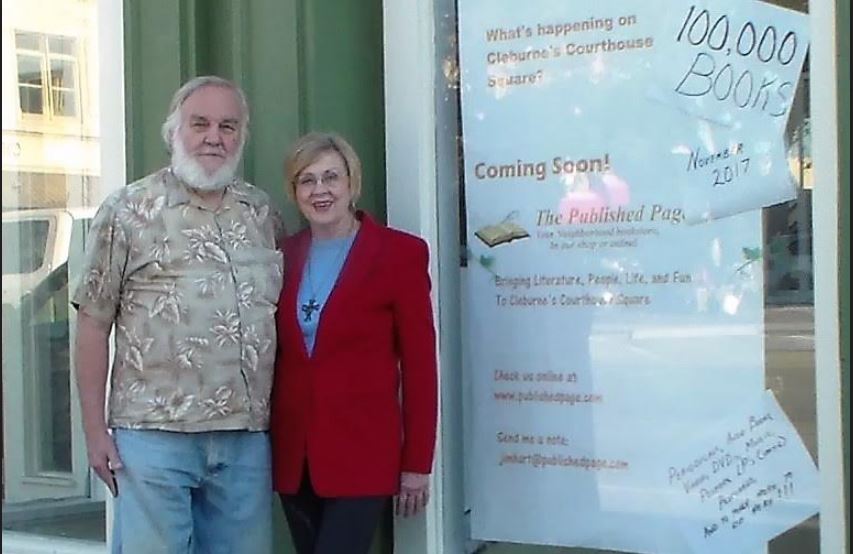 On Nov 1 Jim & Connye Hart, 72, are opening a large real used bookstore in Cleburne, Texas. When fully completed they expect to have over 100,000 books.

Move over Amazon, starting November 1st, Jim and Connye Hart open a big olden days style used bookstore in Cleburne, Texas outside of Fort Worth. When fully built out the Published Page expects to offer over 100,000 actual physical books. And talk about confidence, they are also buying a large two story 140-year-old building with nearly 10,000 sq. ft. of usable space to house the books!

The pair of 72-year-old booksellers, who live a few miles down the road in Arlington, started selling used books in 1997. First they were in a small antique center and later in a large regional mall, but rising rents forced them out of retail. By the early aughts they put the books in storage, put the business online and have been online as the Published Page ever since.

But with the Cleburne adventure, all that's about to change. According to Jim Hart, Cleburne is a small (pop. 30,000) old railway town about 30 miles down the road from Ft. Worth. In the past it has been bypassed by the highway system, but recently the Chisholm Trail Parkway (southern trail toll road) has opened, and apparently this route goes directly from Ft. Worth to somewhere near their front door. It takes about a half hour by car.

Earlier in the Fall the Harts announced their decision to their fellow Internet booksellers and since then they’ve been counting down the days to opening. Their Facebook page displays photos of the new premises - there’s Connye up on scaffolding painting the front facade, here comes the big moving vans, there are the shadowy figures physically moving their inventory in hundreds of boxes to the site, leaving little doubt that everything old is about to be new again.

The family has six children, none of whom, Jim said, has ever displayed the slightest interest in the trade before. But, he said, “they’re all pitching in to make this happen.”

Hart sees the November 1st date as a soft opening. He hopes to have at least a quarter of the floor space ready for occupancy and have enough books up on the shelves to make the shop a destination for book hungry buyers from the city and others in an area where used book stores, especially big ones, are sparse.

His plan is to begin on the ground floor and then continue building out the upstairs, which he describes as old style offices with antique lettering on the doors built around a traditional atrium. “I am an engineer,” he said, “so making the repairs, that part has been fun, but I’m ready to start selling books again."

Even though he's adding a huge new retail component, he expects to continue his internet business and feels confident that the numbers are going to pencil out, only now he’ll be paying a mortgage instead of storage fees.

The Published Page specialties include science fiction, petroleum geology, Civil War and American History. "Our average sale is about $12. We also sell inexpensive books for as little as $1.95," he said. “I like being in the book business and hate to see us price ourselves out of any market. I want our customers to be able to find something to buy and I want them to come back."

He also buys books, sometimes lots of books, and sometimes a few here or there. In the store he’ll buy either for cash or store credit, which should be a boon to those who have older books, paper or estate material and a dwindling number of places to sell them.

As for staff, Hart said, "Jim Arner, aka 'Gentleman Jim,' (a colleague in the Western trade) has volunteered to help for the first month, there are the kids, and we’ve had several qualified people express interest. The basic thought is, 'Let’s get it running.'”

Hart is an engineer by training, and although born in London to a Texas GI father and a British mother, his Texas roots go way back. When it comes to books, “I’ve been a reader and book collector all my life,” he said. “I was attracted to online book selling because I was writing computer software.”

Originally he thought he was going to be a “software guy” but after they bought their first really big lot of books, “it’s been more about books and less about engineering and consulting since then.” Presently the Published Page owns about 100,000 volumes of which about 40,000 are already cataloged and can be viewed online.

Asked why a septuagenarian couple takes on a six figure mortgage, he replied that they’d been scouting for a new location for several years and it “seemed better to have a hard asset (than a leased space). Given how old I am this is my retirement. If something happens it’s an asset for our children."

Hart isn’t sure if their new shop is the advance wave of a resurgence in large used book shops, with the smell of old paper and the long hours spent browsing through the shelves, but he did say, “I hope there will be booksellers around for a long time, and I hope to be one of them.”

Their new physical address is:

Store hours are expected to be Tues.-Sat. from 10-6, with other hours by appointment. He hopes to eventually be open seven days a week. The Published Page will participate in a town-wide celebration in Cleburne on Sunday, Nov. 5, but will not otherwise be open on Sundays.