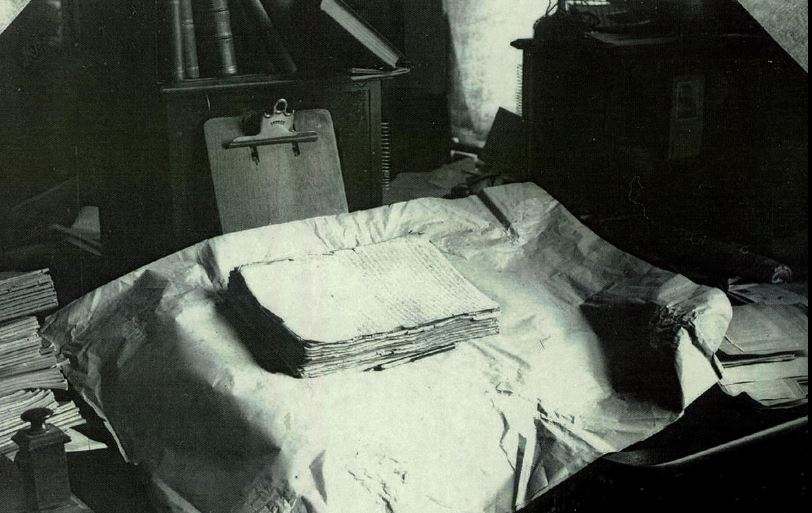 A record sale in the books and manuscripts field was completed late last month. A private sale between two churches saw the printer's manuscript copy of the Book of Mormon sold for $35 million. It surpassed the previous record of $30.8 million paid by Microsoft's Bill Gates for Leonardo da Vinci's 16th century manuscript notebook Codex Leicester in 1994.

The printer's manuscript is the earliest, virtually complete copy of the Book of Mormon (it is missing only three lines). The original manuscript, dictated to scribes by church founder Joseph Smith, Jr., was placed by him in the cornerstone of Nauvoo House in 1841. When removed decades later, most of it had been destroyed by water. Other parts were snipped off as relics over the years. The result is that only 28% of it remains, housed by the Church of Jesus Christ of Latter Day Saints (LDS) in Salt Lake City.

The printer's manuscript copy was created at Smith's behest by Oliver Cowdery. It was delivered to printer E. B. Grandin of Palmyra, New York, in 1830, and used to set the type for the first edition. However, Cowdery retained the printer's copy. In 1850, shortly before he died, Cowdery gave it to David Whitmer, one of the three witnesses to the Book of Mormon. The printer's manuscript remained in Whitmer's family until sold by his grandson in 1903 to the Community of Christ (then known as the Reorganized Church of Jesus Christ of Latter Day Saints). The 1903 purchase price for the printer's manuscript and various other documents was $2,500.

The recent sale was from the Community of Christ to the LDS Church. For those not familiar with the former Reorganized Church, the Latter Day Saints were a unified group during most Joseph Smith's lifetime. Persecution and problems with neighbors moved Smith and his followers from New York to Ohio, then Missouri, and finally Nauvoo, Illinois. While there, Smith began to have issues with some of his followers as well as neighbors. While Smith was regarded as a prophet, not all believed him to be infallible. His revelation endorsing polygamy was particularly controversial, leading to a split with some church members. The dissidents published a newspaper, Smith authorized its destruction, and mobilized some followers. The Illinois Governor sent in the militia, Smith surrendered, and was sent to jail for causing a riot. Unpopular with his neighbors, a mob attacked his prison cell and Smith and his brother were murdered.

After that, the Church remained split. The bulk of Smith's followers went with Brigham Young. When increasing issues with neighbors forced Young and most of the Mormons to get out of Nauvoo fast, they began the legendary journey west, to found their new home in a place where they figured no one would bother them, the Valley of the Great Salt Lake. A few splinter groups remained. The Reorganized Church was one.

Followers of the Reorganized Church remained in the Midwest. In 1860, they named Smith's son, Joseph Smith III, as their leader. They moved around the Midwest, but eventually settled in Independence, Missouri, Joseph Smith's original Zion. Smith descendants continued to lead the Reorganized Church until late in the twentieth century. Today, the Community of Christ has followers around the world, having conducted missions like the much better known and larger LDS Church in Salt Lake City. Still, their community is sizable, their theology having a somewhat more liberal bent than that of the LDS Church.

One place where the two faiths are unified is in the preservation of important material common to both. There isn't anything much more important to them than this, unless someone finds the original manuscript of the Bible. Naturally, the LDS Church has a much larger collection of important material and the best facilities for its preservation. They also have access to donors of great means. The $35 million was all raised through donations. Presumably, that money will help the Community of Christ carry out its mission.