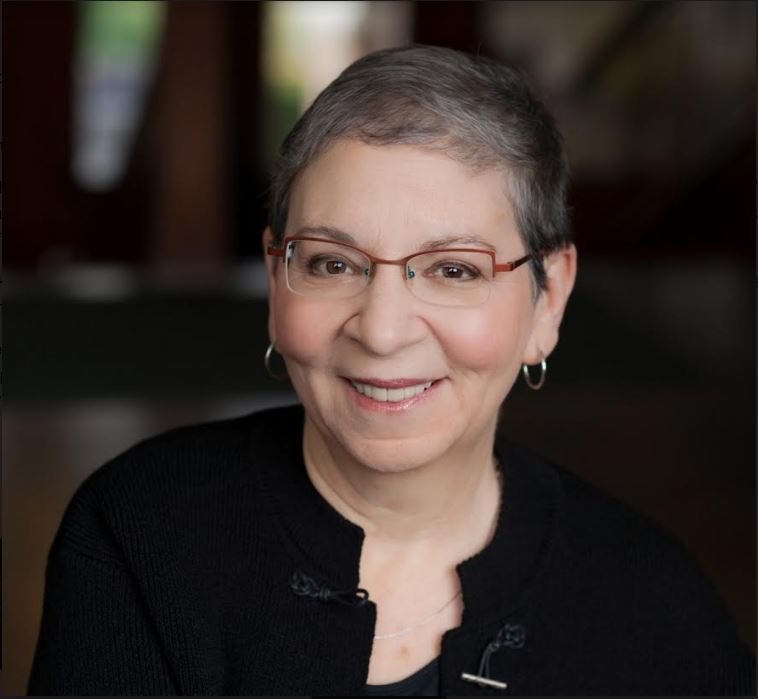 There’s not much in the world of bookish pursuits that Nancy Pearl hasn’t tried. She’s been a Tulsa bookseller, a Seattle librarian, a highly regarded book reviewer with regular guest appearances on NPR, the author of four volumes in the Book Lust series of recommended reading. She also interviews authors on television and is possibly the only librarian to have her own collectible action figure - a little plastic doll that makes a “Shushing motion…..”

This September, at age 72, she added another string to the bow with the publication of her debut novel George & Lizzie ($25, Touchstone-Simon & Schuster).

When I first met Nancy Pearl she was still Nancy Linn, a student at Cass Tech High School in Detroit. My brother was her classmate; he brought her to our house where she was soon recruited by my mother to work in the book mines at the Cellar Book Shop (the Motor City’s only upstairs ABAA shop specializing in the Philippines and Southeast Asia), a job she did well and held for many years.

We all knew Nancy was destined for bigger things. Now, more than 50 years later, it’s a pleasure to look back on her career and see where she thinks the written word is headed. In her opinion, “The global rise of the Internet changed everything, not only books and the book business, it truly changed the way we live. I’m not a Luddite," she said, "I love what technology can do, and I have 13,000 followers on Twitter." Though she loves what it can do in libraries, she fears the end result of all that new technology is a certain shallowness, superficiality and isolating effect.

To be candid she’s worried about the future of libraries and reading: “When the Internet tsunami first hit, libraries didn’t know how to deal with it. The reaction was primarily consternation and the discussion was what role we would have now that the Internet could answer any ‘ready reference’ questions."

"Would it be the role of librarians to point out which are reliable sites? Turns out nobody knew and in the fullness of time nobody cares. The amazing and fascinating world of technology took over the libraries and crowded out the other services.”

She sees libraries as the heart of the community. "There are other ways to access computers and other venues for programs and discussions. Only the library provides both information and enrichment. But,” she said, "that is not seen as a primary function any longer.”

A longtime library professional she is a 1967 graduate of the University of Michigan with a degree in Library Science. She received her MA in history from Oklahoma State University in 1977. She lived 22 years in Oklahoma, fifteen of those in Tulsa.

In the beginning she worked at Yorktown Alley Bookstore in Tulsa, which was an independent shop selling new books. "As the lead bookseller it gave me an opportunity to talk with and sell books to many people." Though the store has since closed she termed it “a pretty great experience."

From there she went went back to library work in the Tulsa City-County system. Her career as a reviewer began at the Tulsa World, a daily paper and expanded when Tulsa public radio station KWGS requested her to come on and talk about books, which she did with enthusiasm from 1989 to 1993

She’s does not recall exactly how she made the transition from the Seattle airwaves to NPR’s Morning Edition, where she chats with host Steve Inskeep on a regular basis. In her ongoing role as a radio reviewer of current writing and TV interviewer of living authors she estimates she read thousands of books.

As for money, well money is not a big part of the Nancy Pearl equation. For example, she recalled, “When I left the bookstore in Tulsa to work for the library, it paid less than the bookstore." Presently she is semi-retired, though she continues to review, interview, host workshops and most recently write a novel.

Nancy Pearl - writer of fiction was not a premeditated action.

"A few years ago," she said, "two characters appeared in my head. I knew their names and where they met, but nothing else. In the next five years they stuck with me and I gradually came to know them. I wrote it in my head first."

"It was not on my list to write a novel. One day when I couldn’t find just the right book, I thought, 'Well, I could write it down, and it would be exactly the kind of book I'd want to read.'”

The checklist for "exactly the kind of book I'd like to read" includes quirky characters and healthy doses of book references, poetry, football and prickly people. Working with editor Tara Parsons it took two years to get it from her head to down on paper.

The story, set largely in Ann Arbor, is told through the eyes of a young Jewish woman in her 30s. But, Nancy said, "None of it is autobiographical, it’s all fiction." Her writing style is not straightforward, there’s much back and forth, many back stories and minor characters, "but that is my voice, the older and wiser, narrator, that's me,” she said. “I even got to record an audio book."

On the market for less than a month, most of the reviews are positive. Her publisher is pleased, she herself characterizes it as "not an excessively commercial book."

Though she's met many authors on book tours, she found her own promo schedule “exhausting - really exhausting.” Her September events included stops and talks in Oregon, California, Wisconsin, up and down the East Coast and of course, a visit to Tulsa.

"Right now I’m just catching up on my sleep. It was wonderful: wonderful libraries, bookstores, great people. I pride myself on the ability to rise to the occasion, but I must say right now I’m pretty tired." From October 3 to November 17 she goes back on the road promoting George & Lizzie with stops in Michigan, Virginia, Ohio and Washington.

As for another book? “I’m not so sure. I want to enjoy this. There will be a paperback edition next year. I like hearing from readers. I love talking about books and sharing."

Commenting on the 'Nancy Pearl - Librarian Action Figure' she noted that “it’s been discontinued, but rumor is there may be a new and different one, equally fabulous, plastic and 5” tall."

“There’s no more shushing, this one is fighting against censorship.”

Though she is presently recovering from the rigors of travel, she has no intentions of scaling back. "Over the years I've traveled abroad talking to kids in other countries about books and reading. It’s arranged through the U.S. embassies, I go myself in person. I’ve been to Estonia, Bosnia, Vietnam, Cambodia -- I’d love to do more of that."

Sounds like a full plate, but Nancy Pearl has grander ambitions, potential sponsors please note: “I would love to do a barnstorming tour on foot -- to walk across the country and raise money for small and rural libraries.”