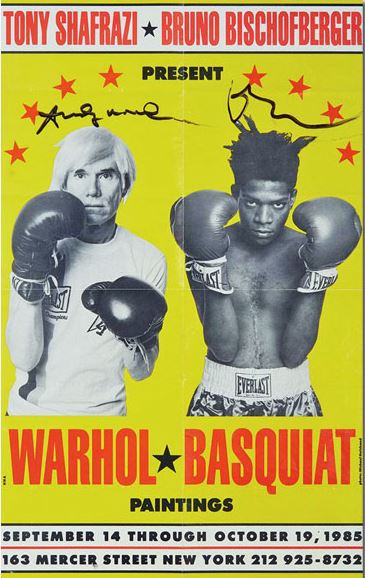 Ready to Rumble – Warhol and Basquiat set off to exhibit their paintings.

It was a testament to just how crazy much money collectors will spend on their passion. Sadly, it was not a testament to what people will spend on books, which is much more reasonable (that is, less), but paintings. A painting, which didn't even manage to have a name (it is called "Untitled") sold for $110.5 million at Sotheby's in May. It was painted in 1982 when the artist was but 21 years old. Jean-Michel Basquiat was an African-American street artist from New York. He moved from graffiti to paintings in the late 1970's and soon developed a following. In 1981, he became friendly with Andy Warhol, and the the two collaborated on paintings for several years. Ironically, the sale of this untitled painting of a skull surpassed a $105 million item of Warhol's to become the most expensive American painting ever sold at auction. Sadly, it was a fast crowd with which Basquiat lived. He died in 1988 at the age of 27 of a heroin overdose.

You might wonder what any of this has to do with the Top 10 most expensive items sold on AbeBooks website for the second quarter of 2017. The answer will become apparent when we reach the top of the list.

For the second quarter, there were several works or books featuring artwork on the list along with literary items. Here is AbeBooks Top 10 for April-June 2017.

9/10 (tie). Brave New World/Letters to Goddard Lieberson. One is a book, the other a collection of personal letters. Both are from Aldous Huxley. Brave New World, published in 1932, is his most enduring book, a look at the distant future. This copy was a first edition, first printing, with dust jacket. The letters are a collection of 13 written by Huxley, two by his second wife Laura, to Columbia Records President Goddard Lieberson. They met when Lieberson asked him to read from his work for author recordings Columbia made in the 1950's. $7,500.

6. Codice del Sacro Militare Ordine Gerosolimitano. A compendium of rules for Gerosolimitano, the Order of Knights of St. John of Jerusalem, a group dating back to about 1100 whose goal was to free the tomb of Christ from Islamic control during the Crusades. This is a first Maltese edition from 1777. $9,531.

4. La Fontaine's Fables. A four-volume set of Jean de La Fontaine's fables, published from 1755-1759. This is a second edition of the collection of writings from the 17th century French fabulist, containing 275 plates. $10,626.

3. Seven volumes of poetry by Hans Sachs. Sachs was a 16th century German meistersinger, poet, playwright, fabulist (that word again) and shoemaker. The latter paid the bills. He wrote over 6,000 pieces of literature (how many shoes he made is unknown). $10,999.

2. Chocky. This one is a science fiction tale by John Wyndham, first published in 1963 in Amazing Stories. This is a signed first edition in book format, published in 1968. $11,443.

1. Tony Shafrazi . Bruno Bischofberger Present Warhol . Basquiat Paintings. A poster for for an exhibition of Warhol and Basquiet's collaborative work in 1985. They are dressed as boxers. Abe notes that Basquait looks like a real fighter, while Warhol looks as if he couldn't "punch his way out of a damp paper bag." This copy was signed by both artists. The sale of this poster was made shortly after the record breaking sale of Basquiet's painting. $20,700.