MONA. This Is Not Your Typical Library Story 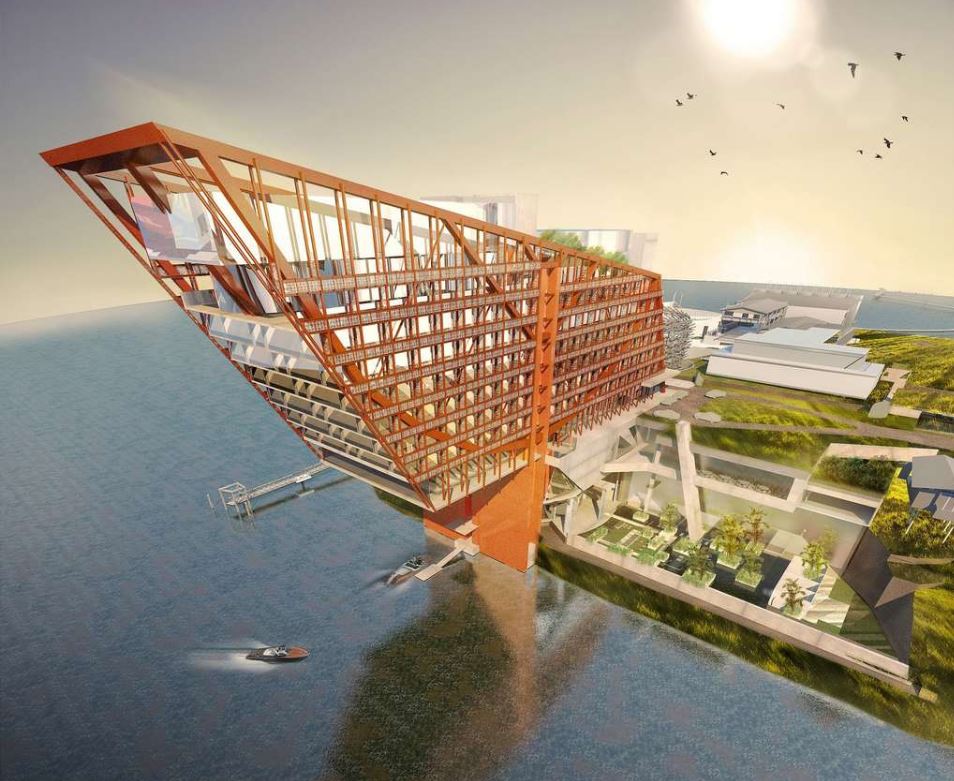 The new MONA (image from MONA).

A three-story circular library has been proposed to house the collection of one of the more unusual book collectors you will ever find. His name is David Walsh, and he built his fortune the way virtually none of the other millions of visitors to Las Vegas did – by gambling. He devised some sort of system while there as a young man whereby he can keep the odds just 1% in his favor. Just keep betting with these odds over and over again and you can't help, in time, but to amass a fortune.

Some unusual combination of flamboyant, reclusive, and eccentric, Walsh comes from the other side of the world (unless you are Australian as is he). At the beginning of this decade, he built a museum and library in his hometown of Hobart, Tasmania, Australia. It is known as MONA, the Museum of New and Old Art. Planned is a massive expansion, which, along with the larger library and museum, will house a hotel, conference center, casino, auditorium, theater, restaurant, retail spaces, spa and outdoor stage. Sticking with the MONA-like acronyms, the hotel is known as HOMO (HOtel at MOna), the outdoor area HOBO (HOBart Odour). Walsh hosts an annual festival known as MONA FOMA (Museum of New and Old Art: Festival Of Music and Art), or MOFO for short. I am not making any of this up.

Walsh came up with a unique solution to the problem of "reverberations" coming from the theater disturbing those in the seven floors of hotel space above. Rather than a lot of insulation, the hotel will be built on something of a suspension bridge above the rest of the structure. As such it looks sort of like a bridge, or more specifically, the Golden Gate Bridge turned upside down. It will be colored the same as its right side up counterpart in San Francisco.

While the new MONA will be bigger, better, and mostly above ground (the current museum and library are primarily below ground), it is still named the Museum of Old and New Art. Does the library play second fiddle? Not according to the MONA website. It informs us that more than art, "David Walsh is mad about books." It then goes on to describe how Walsh developed his interest in books and details about the library. It is like no other library description you have seen.

The library is essentially David Walsh's personal collection, now 11,000 volumes strong. The website explains, "Our collection reflects David Walsh's tastes (which are both prolific and eclectic; as a kid he had no friends, so decided to dedicate his small life to reading, in Dewey order, the entirety of the Glenorchy City Library)." The library now "boasts (literally, he boasts about it quite a lot) around 11,000 titles in a range of formats, covering topics such as architecture, science, philosophy, statistics, literature, mathematics, ancient Egypt, and African art; as well as wine, beer, betting odds, religion, socialism, sex, and that old chestnut—death."

A major part of the library concerns the artists whose work appears in the museum. However, in recent years, Walsh has become interested in rare signed editions, though not really knowing why a book being signed makes it special. For some unclear reason, he thinks it is somehow related to religious observance, a "hangover" from his Catholic upbringing. The site continues, "The fruits of his Catholic guilt include: a first edition Lolita, an early edition of The Origin Of Species, signed editions by Umberto Eco, J.G. Ballard, and Hunter S. Thompson, and hand-written documents by Balzac, Whitman, Flaubert, Einstein, Newton, Marconi and Alexander Graham Bell."

You will also find a book in the library written by Mr. Walsh. The title is A Bone of Fact. The site notes, "David wrote a book once. For about a year after it was published, any time anyone asked him anything (Why did you build the museum? Where are the toilets?) he would answer, ‘It’s in the book.’" It is for sale, but, "If you really are that much of a cheap f*cker, you can read a copy for free in our library." Actually, you can read whatever is in the library. It is open to researchers and the public, but you may not borrow the books and take them home. You need to read them on the premises.

The estimated cost of the new structure is $300 million. That's Australian currency, not quite American dollars, but still about US $225 million. Presuming the necessary approvals are granted, completion is expected in 2022.

As for David Walsh, along with flamboyant, reclusive, and eccentric, we can add one more. He has an unusual, but wonderful sense of humor (or "humour" in Australian).