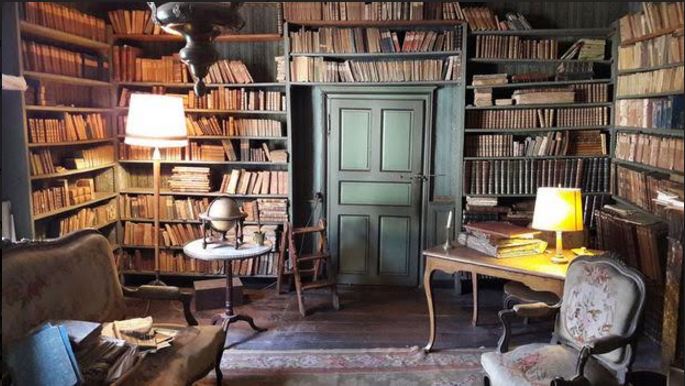 A collection of old books, untouched for 200 years, was found in Bouillon, Belgium, last month. The reading room where they had remained silent for so long was haunted by the spirit of a “honnête homme” from the turn of the 19th century.

When I reached the Henri Godts’ house sale in Brussels, Belgium, on the phone, I immediately felt the excitement created by an article published by the local weekly Le Vif, a few days earlier. It was entitled: “A 200-year Old Book Collection Discovered Untouched in Bouillon”—Bouillon being a Belgian town close to the French frontier. The assistant of Mr. Godts sighed: “People keep on calling us,” she says. “Because of this article, which is full of mistakes!” It was, as it appears, written by a trainee. “Entering this room is like travelling through time,” he says. “What’s so impressive is that every book has remained in its place, probably where their former owner had left them.”

Yes, and he even... turned down the electric lamps before leaving the room! Indeed, some electrical devices appear on the pictures provided by Mr. Godts. How come? Books sell better with a good story—but this one sounded a little bit too nice. The article also quotes Mr. Godts: “When I first entered the room, I was stricken at once by the authentic atmosphere of an 18th century reading room.” Now, one almost expects to find the skeleton of the owner, sitting in an armchair while holding a first edition of Voltaire in his hand. “This is idiotic,” resumes the assistant of Mr. Godts. “We are no archaeologists!” As a matter of fact, the story appears to be simpler: an old family of Bouillon came to Mr. Godts’ house sale one day to tell him about this collection that had remained in the family house for more than two hundred years, and that they intended to sell. “Only 182 lots offered for sale on June 20 come from this collection,” underlines the assistant of Mr. Godts. But do not be disappointed. Upon examination, though less novelistic than expected, this story is still an extraordinary one.

As I was speaking to his assistant on the phone, Mr. Godts came in. “Here’s another one who wants to find out about the book collection!” she says, handing him the phone. Mr. Godts is no newcomer to the game—he’s been running his house sale for 35 years. He explains: “This is indeed a collection that has remained intact for two hundred years. At the end of the 18th century, its owner left France, fleeing from the Revolution (1789—editor’s note). He settled in Bouillon, in this big house, where he built this collection.”

The explanations are rendered difficult by the fact that the sellers refuse to reveal their identity—and couldn’t be reached. But beyond the reputation of Mr. Godts, several points suggest that this is indeed a genuine story. First, most of these books date back to the turn of the 19th century. Second, they almost all come in their original wrappers—as issued, as booksellers say. “At the time, you bought your books unbound,” explains Mr. Godts. “The bookseller would deliver them to you fresh from the printing house, uncut, unbound, and protected by mere wrappers. You were then free to have them bound by a professional binder, according to your own taste.” In fact, binders had a privilege, and it was illegal for a bookseller to bind books.

This detail tells something about our book collector. He was probably no wealthy man. Otherwise, these books would be bound—in full morocco—, and marked with his coat of arms, wouldn’t they? Well, the French Revolution was a troublesome period, which created economical uncertainties. Nice bindings from this period are less common; and at a time when the heads of the Nobles were falling like leaves in autumn, it was wise to keep a low profile. As a matter of fact, following the Revolution, every mark of nobility was erased: statues were destroyed, graves were desecrated—the revolutionaries played soccer with the head of Cardinal de Richelieu in the yard of La Sorbonne!—and coats of arms were scratched from books. Yet, Mr. Godts is positive: “Our collector did run away from the Revolution, but he was not of noble birth. He was just a learnt man of his time, and, as such, he built the perfect collection of a “honnête homme.” Travels, science, philosophy, he was interested in all the main topics of the time.”

A perfect collection, really? “Well, several lots are incomplete, it’s true,"  says Mr. Godts. For instance, the classic travels of the Baron de Lahontan set is missing one volume, the edition of the Encyclopaedia of Diderot is also defective, as well as the voyage of La Pérouse, which comes without the crucial atlas. The owner of this collection was clearly more of a keen reader than of a bibliophile—while it takes off some sale value to his collection, it adds a lot of spiritual value to it. This is indeed a genuine personal collection from the time, which is becoming rare. “The house has remained in the same family ever since,” explains Mr. Godts. “Of course, some improvements such as electricity were made along the years; yet, this room has remained almost as a sanctuary. When I was invited, it was locked and it was indeed like entering a time capsule.” Even the furniture dates back to the turn of the 19th century! “The pedestal table, the chairs, and even the globe that you can see indeed date back to the period when the collection was built up,” goes on Mr. Godts. “But their current owners have decided to keep them for themselves.” Thus, the chair we can see on the picture is where our learned reader used to sit. There he would open one of the books sheltered on the shelves all around the room, and start reading. He probably used his globe numerous times to find about some obscure place he had just read about—and the contemporary wooden floor did resound with the sounds of his pace, two hundred years ago. Looking at the picture of the room, it is as if we could hear them ourselves.

Of course, the story of an untouched collection saved from limbo is made even more glamorous if it contains “invaluable” (or rather very valuable) books such as the famous Ortelius’ atlas (1575), a masterpiece quoted in Le Vif article, and which easily stands the comparison with the Mercator's—it was estimated around 45,000 euros. “Here again, this is a misunderstanding,” confesses the assistant of Mr. Godts. “This atlas is, indeed, part of the sale, but it's not coming from this particular collection.” As a matter of fact, such a book didn’t match the rest of the collection. Rare were those whose appraisal went beyond a few hundreds euros. The fact that they were, for the most part, unbound, partly explains it. “This collection is a treasure without treasures,” sums up Mr. Godts. “I'm talking about the commercial value of these books. Some are almost nowhere to be found accounts of obscure voyages, but they are not very expensive. In this regard, the appraisals are quite fair, I guess.” This collection nonetheless featured uncommon and attractive titles—enough to satisfy any serious travel books collector. On June 20, I logged in Drouotlive.com, and “e-attended” the sale. Here are a few results—prices given before the 25% commission.

This is but a short list of the interesting travel books only; “not to mention,” adds Mr. Godts, “a few unusual relations of several travels to the South Sea.” The sale of the collection was supposed to generate 40.000 euros... (results).

The trainee at Le Vif did not do a very good job. But let him who has never lost his lucidity in front of an old book be the first to throw a stone at him! There was something extraordinary about this collection. “In my career, this will remain a very special one; this is no ordinary find,” underlines Mr. Godts. But it was not possible, he says, to sell it as a unique lot—it would probably have generated less money that way. Maybe the city of Bouillon should have pre-empted the whole collection to “save” it from being scattered? But this is the fate of most collections, after all. Anyway, this reading room, which no longer exists, still reminds us of the concrete and direct bridges that old books constantly build between then and now—whether luxuriously bound or as issued.