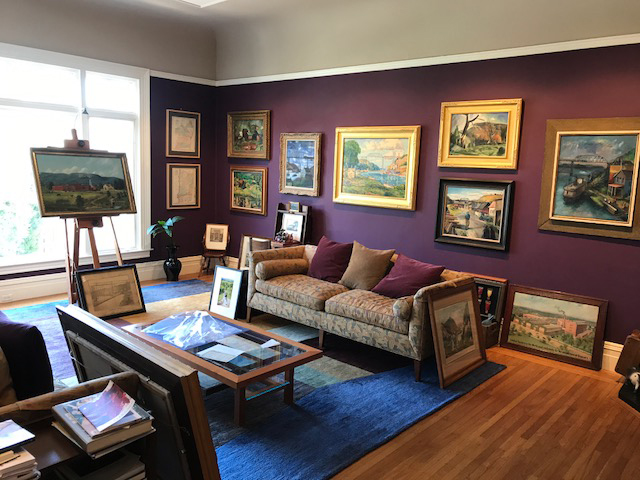 Many years ago, I began to collect books of the mid-Hudson Valley of New York State.  The focus was the printed word both because it was around and somewhere between “un” and “underappreciated.”  Dimes bought old books then and probably would have bought handfuls of ephemera although I doubt I’d even heard the collecting term.

But times change and what was once “un” is now relevant if not important.  The differences today are two; increasing availability and visibility that together suggest relevance of material beyond books as part of increasingly focused collections.  Books, it turns out, are increasingly only the foundation.

Beyond books, there are also manuscripts, maps and ephemera.

As well, book collections these days increasingly share shelf space and wall area with paintings that have long been appealing but difficult to find and value.  The internet, while transforming rare books, manuscripts, maps, and ephemera, it turns out, have also transformed the market in and for paintings.  And as I have written before, burgeoning searchable inventories of a variety of collectibles invite, if not require, the interested to narrow their focus, something most collectors are wont to do but often have not understood - that their original focus now includes many more possibilities than they imagined and that they can collect successfully with a narrower focus that ten years ago was modelled on more general collecting. It turns out that “narrowing searches” is close to essential because there is so much more material available.

Even so, such collections can grow to grand, if not glorious scale.  My own collection is an example.  With about 5,000 items I have had to narrow but even as I do the possibilities have increased.

Somewhere along the way paintings became a possibility.  I think smart collectors long considered art, be they prints, lithographs, drawings or paintings as logical, if exotic acquisitions.  I’m of the more pedestrian breed, the collector of books who has adjusted as I learned of different categories of possibilities.

About twenty years ago I began to acquire both regional furniture and paintings and over the past decade have spent far more on wood and paint than I have on paper as I had acquired many of the important books and was looking beyond the printed word to what else was possible.  What I found were images and I have since pursued them.

I Initially purchased Currier & Ives prints and later material from other printmakers.  In time I pursued paintings, focusing on views of Ulster and nearby counties.  Today images, mostly paintings, structure the collection.

A few weeks ago I bid on three paintings at Shannon’s Fine Arts Auctioneers in Connecticut.  All relate to the Hudson Valley and two of them Ulster County.

The first by Daniel Huntington is a painting dated 1899, a very large image [6’ 9” wide x 4’ 9” high] of Lake Mohonk in Ulster County, New York.  The painting seems to reimagine the mountain setting prior to it being developed by the Stokes and Smiley families.  Mr. Huntington painted a similar scene of Lake Mohonk in 1872 in a much smaller format [24” wide x 12” high].  Emotionally I’m attached to the place and found the painting, estimated $30,000 to $50,000, appealing.  The hammer was $48,000.

The second is a painting by Hendrick Dirk Kruseman Van Elten of Berry Grounds, Ulster County, N. Y.  He was active in the United States from 1865 and owned a home in Ellenville, Ulster County.  The painting appears to date to about 1875.  The hammer was $8,000.  The scene is probably looking south from Ellenville with the Shawangunk Mountains rising on the left.

The third painting, by Charles W. Tice, is of the Thomas Powell, the 19th century side-wheeler steamship, on its inaugural run on the Hudson River between Newburgh and New York in 1846.  Painted that year, it was, for more than 170 years, in the family of Homer Ramsdell who was the original co-owner of this boat, with Thomas Powell.  The hammer was $13,000.

These three paintings have now arrived and will be hung by Chris Faiss who reorganizes the collection every year or so.

Well, these paintings are in the house and I’m including images of the paintings and some of the walls I expect may be their future homes.  We’ll see.