"Despicable" Book Thief Sentenced to Two Years in Jail, But the Book is Still Missing 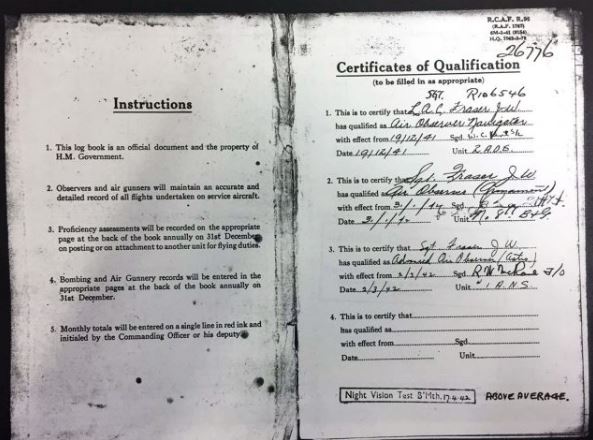 The missing logbook (from Metropolitan Police).

The judge described the book theft as a "despicable offense" in sentencing the thief to two years in prison earlier this year. Stealing the personal memento of her war-hero husband from a 93-year-old widow is about as low as they come. The despicableness of Alexander Bateman is compounded by his unwillingness even now to reveal what he did with Royal Air Force pilot Sgt. John Fraser's logbook. As a result, the family is now offering a £5,000 (US $6,500) reward for its return.

John Fraser was a member of Squadron 617 of the RAF in 1943. Today, they are better known as the "Dambusters." On May 16, 1943, they set out on a most dangerous mission. Their job was to blow up three dams in Germany's Ruhr valley. It was at the heart of Germany's industrial production. British military leaders figured they could cut down production by depriving the factories of water and electricity provided by the hydroelectric plants. They could also create damages and wreak havoc by spilling the large volumes of water behind the dams.

The task was far more difficult and dangerous than it sounds. They had to escape radar detection, which meant flying at a dangerously low altitude. They were skimming along barely 100 feet above the ground carrying their payloads of bombs. Some were downed by simply clipping power lines. Those that reached their destination would have to target their bombs perfectly. To work, the bombs had to strike the dams below the water line. However, the Germans had protective netting below the surface designed to stop torpedoes. So, the bombs would have to be timed perfectly to skim the water surface and then be pulled underwater along the dam's edge by their reverse spin. A fuse would then set off the explosion.

As if this weren't difficult enough, the pilots faced foggy weather. Locating the right dams was not easy. Then, they had to fly all the way back across Germany and along the coast of the Netherlands to return safely.

The mission was for the most part successful, two of the three targets being seriously damaged. The wall of water and subsequent flooding killed 1,600 people, more than half of them captive laborers. It took many months to fully restore production. Almost 40% of the airmen who participated died in the raid. Sgt. Fraser was not one of them. He survived the mission, but died many years ago.

In 1996, his widow, Doris, was contacted by Alexander Bateman. Bateman described himself as a historian who wanted to borrow Sgt. Fraser's logbook for research. Doris Fraser thought this was an opportunity to help preserve her husband's memory and complied with Bateman's request.

Mrs. Fraser trusted Bateman with the book for a long time, but eventually her daughter, Shere Lowe, asked to have it returned. In 2003, Bateman sent her a letter which was slit open at the bottom. He claimed the post office lost the logbook. Later, he said the post office returned it to him. Next, he claimed the logbook had been given to him by Fraser's widow. He produced a Christmas card saying "please keep the log book," but on examination, it was determined the writing had been forged. Finally, Bateman claimed that the logbook was taken in a burglary. Indeed it was, but it was Bateman who was the thief.

Bateman is now in jail, but Mrs. Fraser and Ms. Lowe are still without the logbook. Ms. Lowe has now offered the £5,000 reward for its return. While it is a valuable item, that reward may be worth almost as much as the book itself. It is the sentimental value of what she describes as a "piece" of her father that matters so much. She noted that she lost a father and her mother lost a husband at a young age. "This is not a document," she said, "it’s not a piece of paper, it’s a piece of my father’s legacy of courage."