Booking It in South America 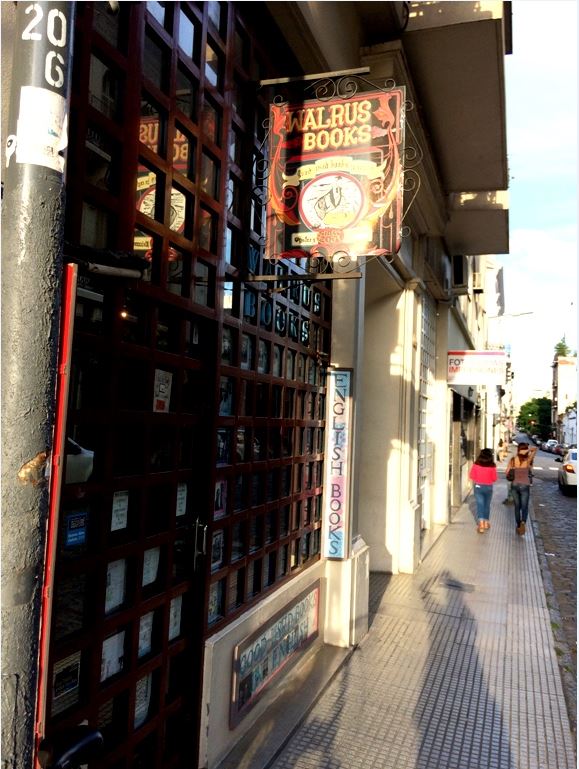 Hola! We finally did it. We went around Cape Horn after reading about it and talking about it for years and it was a grand adventure. We are two old traditional sailors/booksellers, who are getting too infirm to haul on the halyards and take in sail anymore so we opted to wuss out and be spoiled rotten for two weeks on The Zaandam, a Holland America cruise ship. Though it carries about 1300 people, it never seemed very crowded except during life raft drills. The ship had great food, and too much of it, a couple of good bars, an excellent crew, mostly good entertainment (though some was a bit Las Vegasy, as was the decor), and a very small library with very eclectic, mostly hardcover books, primarily mystery and adventure novels. They also had a “take one and leave one” table with paperback fiction. I took two and left two and finished them by the time our two week sail was finished. It has been tough coming home and cleaning our own house, cooking our own meals, and doing our own laundry again, I can tell you that!

Before we got on the ship, we had to check out a few bookstores in Argentina. Of course! Buenos Aires was our port of departure and we discovered that Buenos Aires is also known as a “book town” like Sidney in Canada, Hey-on-Wye in England, or Grass Valley/Nevada City in California. Buenos Aires touts that it has “more bookstores per person than any other city in the world”. I don’t know about that, but they have a lot of them and we only got to a very few. Buenos Aires is huge. They have 2.8 million people and about 730 bookstores. To put that in perspective, Reno, Nevada has 223,000 people and three bookstores.

Most of them were little, out-of-the-way bookshops with dusty, musty shelves, and worn-looking books in Spanish, Portuguese, and German. Many of the books appeared to have been in the windows for many years without benefit of a feather duster. I don’t think that counts street vendors or even sellers at flea markets, of which there are many. They have a flea market every weekend that covers about 25 blocks in old town and they close all the streets for it. We went into a few and took pictures of some of their window displays, but didn’t linger because my Spanish is less than perfect and because of our limited knowledge of South American authors.

The reason there are so many bookstores, according to the Argentineans, is that “Argentina’s love affair with the book is related to the wave of mass immigration in the late 19th and early 20th centuries. A century ago, Buenos Aires was the shining capital of one of the wealthiest countries of the world. European immigrants poured into Buenos Aires, creating a multicultural environment in which culture and the arts thrived.”…The Guardian. The revolutions and dictatorships took a toll, but then if you know there is shooting in the streets, perhaps staying home with a good book is preferable!

Unlike Costa Rica, South America is not really big on speaking English and my Spanish is pretty much limited to getting around from place to place, ordering food, and finding hotels. We had a limited amount of exploration time before we sailed away so we concentrated on the old town area where we were staying, San Telmo, and visited about 20 bookstores, only two of which carried English language books.

The first was Walrus Books run by Geoffrey Hickman and Josefina Sanchez. They have new and used books and sell or trade books with the English speaking ex-pat community. Geoffrey is an ex-pat from Maryland, U.S. and Josefina is Argentinean. They have been in business about ten years and their small but mighty bookstore is packed with good literature, especially South American writers such as Allende, Borges, and Marquez. I had already finished two books by the time I got there, so I was searching for reading material. The store was relatively busy when we were there so we didn’t get much chance to chat with Geoffrey. I bought Steinbeck’s Travels with Charlie to re-read and an Allende that I hadn’t read, The Japanese Lover. It was very good. I’ve loved most all her books but Island Beneath the Sea is still my current favorite. Her book Maya’s Notebook, which I recently read, took place in an island off Porto Montt at the end of Northern Patagonia, which we passed by on the ship.