Isert: A Voyage Through Slavery 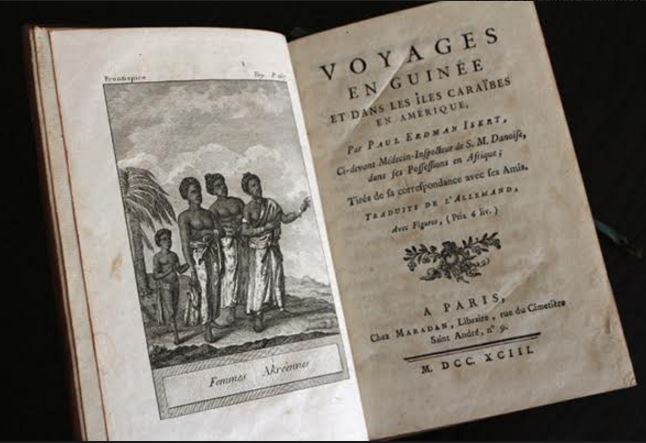 Why do we read travel books instead of travelling ourselves? Well, only an old book like Paul Erdman Isert’s Voyages en Guinée & dans les îles Caraibes en Amérique (Maradan, 1793) will take you to the West coast of Africa in... the 1780s! Right in the middle of the slave trade. And that’s what his book will do—carry you away.

We know about the role played by the English, the Dutch or the French in the slave trade—but what about the Danish? They had a few forts in what was then called Guinea (today’s Ghana), Africa, at the time our author went there—Denmark was then the fifth most active nation in the trade. Paul Erdman Isert was a Danish Buffon, so to speak—a botanist. And the African tribes he met fascinated him. “Some of my readers might wonder, with irony: “Why telling us about the customs and stupid beliefs of those savages and barbarians?” I shall answer them with Raynal, that every historian should consider his holy duty to preserve the customs and the lifestyle of these savage people.” The progressive ideas of the abolitionist societies were, in the late 1700s, gaining ground in Europe; yet Isert’s statement remains unusual for the time. In fact, he obviously fell in love with Africa—the land, of course; but also the people. As a matter of fact, he focused on the “natural history of man”. And what makes his book especially interesting—and moving—is the fact that he did not go back straight to Denmark—he embarked on a slave ship bound to the West Indies before, thus giving a testimony of the two main aspects of the triangular trade.

Isert’s book is made up of a series of letters sent to some friend in Denmark, and written from 1783 to July 1787. He left Copenhagen, Denmark, in November and reached Fort Christiansburg (in today’s Ghana), sixteen weeks later. “Oh my God! What a difference with the land I had left!” He was soon dispatched to Fort Ada on the Volta River. And everything attracted his attention, from the customs of the African tribes to their clothes to the new plants he came across. While caught in the heat of a bloody and scorching battle (“the most terrible day in my life,” he writes), he still remained a naturalist at heart, finding time to “botanize” in a nearby morass.” A footnote reads: “At this occasion, I found a sort of wetlands snail, which I sent to some friends in Copenhagen.” These intellectuals from the 18th century were just incredible.

Isert quoting the French philosopher—and abolitionist—Raynal in his forewords says it all. Yet, he didn’t seem to be that outraged at the slave trade while in Africa, where it seemed to be a part of everyday life. Some Africans sold themselves to pay their debts of game; others were captured at war, and sold according to their “value”. Isert gives details about the price of a slave, which sadly reminds us of the old books business: “When a Negro shows no defect, you can not bargain; but if he misses a tooth, for example, you get a discount of 2 risdallers. If he misses greater parts like an eye, a finger or any other limb, you get a greater discount.” The slave trade was very lucrative, but slaves were expensive. For a healthy male, one would give five gunshots, eighty pounds of powder, two silver bars, a portion of brandy, four dozens of small knives, two pewter dishes, a piece of Indian clothes with flowers, ten handkerchiefs from India, a brass basin, three copper bars, and two lead bars—for a total amount of 160 risdallers (a European soldier in Africa, later states Isert, earned 10 risdallers a month). Far from the stereotype of the ignorant African merchant ripped off by some cunning white folks, Isert says the Negroes were very good businessmen—though, he adds, they usually refused to work more than what was necessary to keep them at ease. He even talks about one Lathe, “the richest Negro of the country”, who spoke three foreign languages, including Danish, and who had sent one of his sons to England and the other one to Portugal for business’ sake!

Slavery haunts the pages of this book, like a contagious disease. But not only before 1786—when Isert left Africa on board of a slave ship bound to the West Indies—, does it reveal its true ugliness. After a dreadful voyage that almost cost him his life under the vengeful hands of the rebellious slaves, Isert reached the West Indies where he witnessed the harsh reality of slavery. “Exhausted, beaten and ill-fed (...), the slaves are exploited to such an extent that you hardly recognize them. How many times have I said to myself, contemplating the broken faces of these half-dead men, Ô! Consider what you once were, and what you are now!”

The condition of slaves in the West Indies was terrible—“a Negro is always wrong. Any white man can, at any time, beat him sorely—and he does not even have the right to defend himself. If he does, he is unerringly put to death.” Isert seemed to come to his senses at this occasion—this was the true face of the “trade”. “Those who stand for slavery will tell you: “We have some Niggers here who answer “NO!” when asked if they want to go back to Africa.” I have nothing to tell these gentlemen but to go to Africa if they really want to be cured from all their prejudice. There they will witness the innocence, the simplicity and the sincerity of these men.”

Discussing about the origins and the skin colour of the Africans—which he intelligently linked to the effect of the sun—, Isert makes it clear that he did not consider them as inferior: “Don’t you ever tell me about a so-called mixed race of men and monkeys! This you could say, should you be able to prove that the Negroes are deprived of intelligence, but they miss nothing on this side, to equal the Europeans as soon as they shall have access to the same culture.” Yet he thought, like many of his contemporaries, that slavery was an incurable evil. “Should we stop eating sugar, drinking coffee and all these things which have now become essential to us in Europe? Of course not, that would make as many miserable men.” The mistake had been done, and it was too late. The Europeans, he says, should have exploited Africa, its fertile soil, its numerous and cheap labour supply; “but the conquest of America was too flattering a project!” he regrets. “Africa appeared so vast, so populated—and its people more willing and ready to defend themselves. It was easier to slaughter the weak Indians and to replace them by slaves. And no one opposed this evil plan, which still remains unpunished!” Despite this dark surrounding, Isert still found time to “botanize” in the French West Indian islands before heading back to Europe. The intellectuals from the 18th century...

Isert’s voyage is a thrilling read, and quite valuable a book, as it gives a genuine insight into the slave trade from both the African and the West Indian perspectives. It is an in-octavo volume, and it comes with two engravings, including a folding one, and some meteorological observations—which are quite tedious. It is rare. It popped up only once on eBay.fr over the past 10 years, and only a handful of copies are for sale on the main research sites. A nice copy is worth around 1,000 euros if you buy it from a professional bookseller. In The Danish Slave Trade and Its Abolition, E.Gobel states: “Isert's descriptions of African societies, of the Europeans in Africa, and of slavery and the slave trade were authentic and detailed.” But it is also a genuine and very human piece of work, written during a very inhuman period.