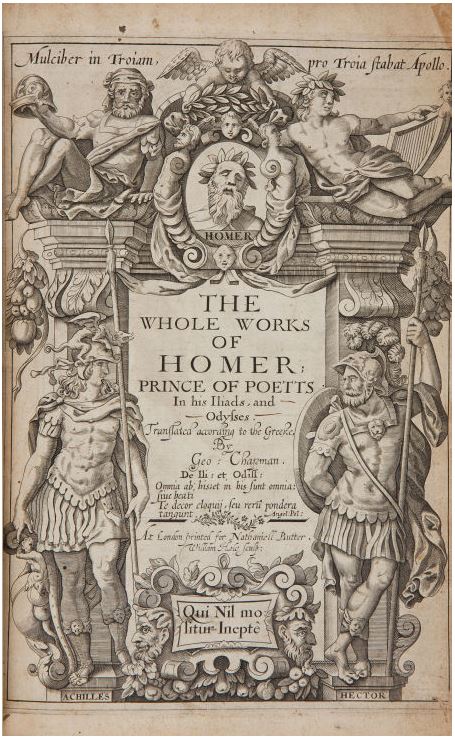 The Whole Works of Homer.

Which books are bringing the highest prices on the listing sites right now? AbeBooks, the largest of them all, has released their list of the top 10 highest prices paid on their site during the first three months of 2017. The works range mostly from old to very old, including two pieces of incunabula (pre-1501). All but two are dated 1753 or earlier, the other two coming from a great 20th century writer and a great 20th century artist. Here is the list.

10. Danorum Regum (Danish Kings) by Saxo Grammaticus. Grammaticus was a Danish historian who wrote long before printing. He lived roughly from 1150-1220. This edition is much more recent, barely over 500 years old (1514). It is the earliest known edition of Grammaticus' work. It contains the story of Amleth, on which Shakespeare based his Hamlet, Price of Denmark. Grammaticus' work is not entirely historic, blurring the lines between reality and mythology. $11,436.

9. The Whole Works of Homer, Prince of the Poetts... Translated by George Chapman and privately printed for Nathaniel Butler in 1616. This was the first complete collection of Homer's works in English. $11,437.

7. The Ruins of Palmyra, otherwise Tedmor, in the Desart, by Robert Wood and James Dawkins, published in 1753. Sadly, this is the Syrian city where ISIS has been putting even the ruins to ruin. $12,926.

6. Actes and Monuments, by John Foxe, the sixth edition, published in 1753. Better known as "Foxe's Book of Martyrs," it was a favorite among English Protestants in the days when they were constantly at war with Catholics. The victims are Protestants, martyred at the hands of Catholics, without much balance for the other side provided by Foxe. $13,000.

5. The Catcher in the Rye, by J. D. Salinger, a 1951 first edition, first printing of the schoolboys' favorite book when schoolboys still read books for excitement. $14,000.

3. Quadragesimale Aureum, by Leonardo de Utino, published in 1471. Utino was a celebrated theology professor and preacher from Bologna who spoke in various cities of today's Italy. This is a collection of his sermons, more likely valued today for the age and quality of the book than its content. $16,016.

2. Les Passions de L'ame (The Passions of the Soul). Once again we find Rene Descartes on our list, this time speaking of the mind-body connection and describing, for the first time, the reflex function. Published in 1649. $17,500.

1. Speculum Historiale, by Vincent de Beauvais. This is another one of those "later" editions of a book written in the 13th century, in this case published in 1473. Vincent de Beauvais wrote an encyclopedia in three parts, nature, doctrine, and historical. This is the historical section. The history begins with God and Creation, continues through biblical events to those of the history of the known world up to the Crusades, which was then contemporary times. $18,900.