Sex, Androids and Quilts: It's Time for Bookfinder's Most Highly Sought After Out-of-Print Books 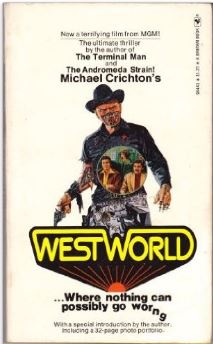 Bookfinder.com has published its list of the most sought after titles from 2016. It's an eclectic bunch. Bookfinder is a meta-search engine, that is, it searches multiple book listing sites, rather than being a listing site itself. That means it is likely to be a favorite when searching for something unusually obscure and hard to find. A common old book, or an old book with recent reprints, is easy to locate. Highly valuable old books, such as an early Shakespeare, are not likely to be purchased from listing sites. That makes the Bookfinder list unusual – they are not the rare and highly collectible, but the rare and obscure, often fitting a niche interest. It is a curious and fascinating list.

Some of the books on this list appear year after year. They combine lasting niche appeal with rarity. Others quickly disappear. Being reprinted is the kiss of death for being on this list. For others, it is a great, but temporary appeal, spurred on by some event, such as the release of a related movie. Not on the 2016 list, but almost sure to be on 2017 based on "massive interest" so far, is George Michael's 1991 autobiography Bare. English pop singer Michael died on Christmas day of 2016. My guess is by 2018, interest in his book will have waned.

Before we get to the Top 10, here are a few more titles that made it into the Top 30. #29 is Women and Men by Joseph McElroy. I haven't read it, but Bookfinder provides a description for the uninitiated: "A big 1,192-page novel that is challenging to read. The plot...is about families (we think)..." Didn't someone else already write War and Peace?

#24. Lost Moon: The Perilous Voyage of Apollo 13, by James Lovell. If you've forgotten who James Lovell is, all you need is five words to instantly recognize him – "Houston, we've got a problem."

#18. Promise Me Tomorrow, by Nora Roberts. An early effort by the prolific romance writer even she thinks is so bad she has never let it be reprinted. Hence the scarcity and demand. This one has been on the list for years, but it's position is finally slipping.

#13. Sled Driver: Flying the World's Fastest Machine, by Brian Schul. Schul flew 212 combat missions over Vietnam, was shot down, badly burned, and expected to die, but he recovered, returned to flight status, and retired a major. A major, and Flynn retired a general? Someone needs to investigate that!

10. Alla Prima: Everything I know About Painting, by Richard Schmid, an instruction manual for would-be painters by someone who already is.

9. Margin of Risk: Risk-Averse Value Investing Strategies for the Thoughtful Investor, by Seth Klarman. I am always wary of people who tell you how to make money. If their formula works, why don't they just use it themselves instead of selling it to us?

8. Fast Times at Ridgemont High, by Cameron Crowe. A 1981 book that became a 1982 film, this is another regular on the list.

7. Mastering Atmosphere & Mood in Watercolor, by Joseph Zbukvic. An alternative if you can't find Schmid's book on painting, particularly if you favor watercolors.

5. Encyclopedia of Pieced Quilt Patterns, by Barbara Brackman. This may not sound like the most exciting book on the list, and it probably isn't, but quilting and sewing books often make this list. These types of books tend to be published in smaller runs and never reprinted, but are highly desired by needleworkers.

3. Permaculture: A Designers Manual, by Bill Mollison. "Permaculture" is short for permanent agriculture. This is a book about ecologically-friendly sustainable farming.

1. Westworld, by Michael Crichton. This probably won't be a regular at the top of the list, but the popular ten-part series last year on HBO based on this story propelled the book to #1. A lot of its purchasers were probably disappointed. Bookfinder notes that this is not a novel of the Westworld story, as buyers likely assumed. Rather, it is a companion paperback book for the 1973 movie of Westworld starring Yul Brynner. It is about a western-themed amusement park populated by androids who behave really badly toward their human guests. Crichton later doubled down on the theme with Jurassic Park. This book contains the movie script and photographs from the film, but is not a novelization.

You can see the entire Bookfinder list by clicking here.