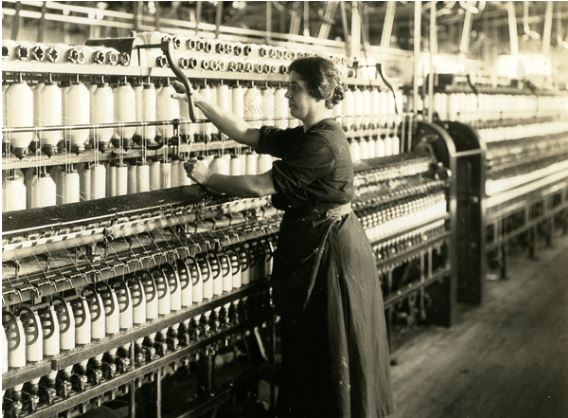 It is an issue today and could be a greater one tomorrow. Libraries and museums, sometimes highly specialized, may no longer be able to raise the necessary funds to stay in operation. It can happen to public ones, which rely on funds generated through tax dollars, or private ones dependent on charitable contributions and admissions to pay the bills. What happens to their collections when their institutions are no longer able to survive? Here is the story of one specialized museum's large library, with as happy an ending for the library as one could hope for considering the sad reality of its demise.

The Osborne Library, part of the recently closed American Textile History Museum in Lowell, Massachusetts, will be sending the bulk of its material to the Cornell University Library. It is not a small collection. According to the ATHM website, it contains over 30,000 books, pamphlets, government documents, broadsides, trade literature and advertisements, 47,000 photographs, prints, paintings, maps, engineering drawings, and other visual items, and many manuscripts, not listed in numbers. Instead, for manuscripts, it says 1,100 collections comprising 8,500 linear feet of material. That's a shelf over a mile and a half long.

Books range from factory novels to mill town histories, technical texts on manufacturing and dying, mill architecture and water power. The concentration of books deals with New England mills, though other areas of the country and other countries are represented. The 47,000 images show workers, machinery, managers, mills, and mill towns. Some go back to the 18th century though most are from the 19th and 20th. Manuscripts include mill business records, those of trade and labor groups, personal papers of those associated with the industry such as workers, managers, inventors, and educators, and a handwritten letter from a mill girl to her family. According to the Cornell Chronicle, the University will be receiving around 90,000 items.

The American Textile History Museum was formed in 1960 by Caroline Stevens Rogers, a member of a textile family whose father had put together a large collection of old textile making equipment. It was originally called the Merrimack Valley Textile Museum, located in North Andover, Massachusetts. In the 19th century, Massachusetts was an enormously industrialized state. The Merrimack Valley, north of Boston, was filled with textile mills. On the south side of the city, was the shoe capital of the land, Brockton. "America's hometown," Plymouth, land of the pilgrims' pride, produced enormous quantities of rope, essential for transportation (ships' sails required it). However, by a few decades into the 20th century, the industry was quickly moving away. It wasn't China or Mexico taking the jobs in those days, but cheaper labor in the American South. By 1960, most of the textile industry in Massachusetts had become a memory. Ms. Rogers strove to preserve that memory.

With its large spinning machines, looms, and other historic equipment, the museum was a hit in the Merrimack Valley. Lots of donations were received from those who shared Ms. Rogers desire to preserve their local history. Along with the equipment on display, the museum formed the Osborne Library to preserve printed and manuscript material related to the trade. The library became a place for researchers and historians to learn about the trade's rich past. In 1992, the Museum purchased a larger space in Lowell, Massachusetts, once the center of the textile industry. It moved in 1997. With a new location, the Museum expanded its educational programs. In 2006, a major fundraising effort was launched which proved a success. In 2009, the Museum announced it had become affiliated with the Smithsonian. It was a remarkable place.

Unfortunately, making ends meet was never easy in the new location, and the second decade of the century proved to be more challenging than the first. Perhaps, interest declined as the generations that once knew and worked in the textile mills disappeared. High tech had long replaced manufacturing as the business leader in eastern Massachusetts. The Museum found itself running deficits of $500,000 a year. In late 2015, the Museum announced a restructuring would take place. The facilities were closed to the public as of January 1, 2016, while the administration sought partnerships and contributions to enable it to continue in operation.

Sadly, the resources did not materialize. In June of 2016, it was announced that the Museum was petitioning the state to dissolve its operations and permanently close the museum. Board Chairman Matthew Coggins said at the time, "This was an extremely difficult decision for all involved and certainly not the outcome we had hoped and worked for. However, the Board recognizes that serious operational challenges, financial shortfalls, and other circumstances make it impossible to ethically and responsibly dedicate further financial assets to attempt to keep our doors open." Caroline Stevens Rogers' grandson, Board member Christopher Rogers, said about his grandmother, "She’d be the first to cry for a minute for the loss, but then say, ‘It’s been incredible. Look at all the good we’ve done.'"

Still, work by the museum's staff did not end that day. They had to catalogue and prepare the vast collection for transfer to a new home. Meanwhile, the Board had to find those new homes for the collections which would display the same level of dedication to their preservation. Now they have found such a place for the items kept in the museum's library. Cornell University already has a substantial collection of textile related material spread over three of its libraries. One contains the archives of the New York based International Ladies' Garment Workers' Union, one of the leading forces in worker rights and women's rights in the early 20th century. Many immigrant women got their first job on arrival in New York in that city's cramped and dangerous textile factories. My grandmother was one. The textile industry is part of many American families' histories, just as it was for that of Caroline Stevens Rogers.