District Attorney's Investigator Sentenced to Five Years in Prison in Theft of $200,000 Worth of Comic Books 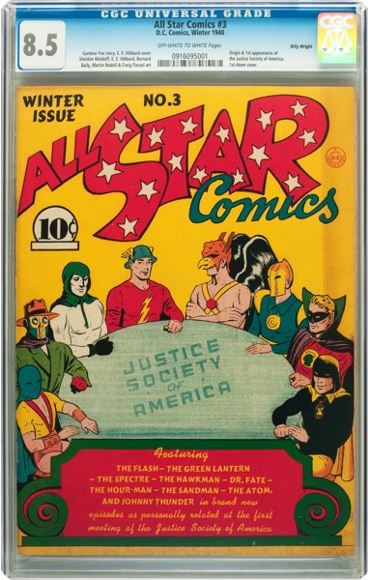 All Star #3, still in its protective sleeve, when offered by Heritage Auctions.

An investigator for the Harris County (Houston), Texas, District Attorney was recently convicted of stealing around $200,000 worth of comic books. Dustin Deutsch was sentenced to five years in prison on charges that could have resulted in as much as a life sentence. As to how someone who worked for the DA came to steal $200,000 worth of comics, the answer is the theft was work related. This is a long and intriguing tale, which starts with a $9 million embezzlement by a man whose crime Deustch was tasked with investigating. Here is that tale.

Anthony Chiofalo was a New York City lawyer at the beginning of this century. For whatever reason, his life went into a tailspin. His marriage broke down and he apparently became unhinged. He began writing hostile letters to various parties, eventually having his law license suspended. He needed to restart his life, and that he did, hooking up with an old lady friend in the Houston area. He secured a good job as in-house attorney for Tadano America Corp., a division of a Japanese company that makes huge cranes. Most people might have felt they had achieved the good life. For Chiofalo, it wasn't enough, not nearly.

Chiofalo began embezzling funds. He wrote out fake invoices to non-existent law firms for assisting him and the like. As often happens when a person gets away with a crime, they become emboldened to commit more. The embezzlements increased, eventually reaching $9 million. Meanwhile, management at Tadano began wondering why their legal bills had become so large. They questioned Chiofalo, who produced phony invoices to explain the costs. However, investigations of those revealed they were fake. With the walls now closing in on him, Chiofalo took off. He was on the run for many months before deciding it was better to face the music than continue to hide and turned himself in. He pleaded guilty and was sentenced to 40 years in prison, but with an opportunity for parole in no more than 10.

As Chiofalo's crime became apparent, authorities obtained a warrant to search his property. Among those locations were several storage units he rented. In them they found all kinds of collectibles. There was much in the way of sports memorabilia and approximately 50 boxes of comic books. They were an eclectic mix, not a logical collection. However, among them were many of substantial value. Some of them were traced back to comic book auctions. Comic books of value are usually kept in identifying plastic sleeves for protection, which makes it easy to trace their history. Even when they aren't in sleeves, valuable copies usually have telltale identifiers such as creases or folds in a particular spot, foxing, maybe a small tear. As with very valuable old books, they can be hard to fence as experts can identify individual copies from these attributes.

Dustin Deutsch was put in charge of sorting through the massive amount collectibles in the storage units. He was assisted by Lonnie Blevins, also of the DA's office, and others. Deutsch and Blevins had been close friends since their days back in police academy and even operated an investigative business together. They needed to account for the evidence and determine what valuables Chiofalo might have taken with him when he absconded. At some point during the process, two of the 50 boxes of comics disappeared, including a couple of very valuable ones.

A few weeks later, Blevins showed up at a Comic-Con convention in Chicago with some loose comics. Unsleeved valuable comic books generally arouse suspicion among collectors, but Blevins had an explanation. He had inherited them from his father, who presumably held onto them for years and treated them like an amateur, rather than professional collector. Blevins allayed those fears further by showing his police badge from Texas. He sold them for $70,000, a great bargain for the unnamed collectors who bought them, or so they thought.

One of the comics they bought was All Star Comics #3. When the buyer brought the comic to an appraiser, the appraiser realized that a copy of this comic book had been sold at Heritage Auctions only a few months earlier. Looking at it, it appeared to be the same copy, based on slight folds and other distinguishing marks. Of course, it could have been Blevins who purchased the comic, but why would he now sell it cheaply with a box of others, and why on earth would he remove it from its protective, and identifying, sleeve? That made no sense. It would take only a little research to determine that it had been purchased by Chiofalo and had been removed from the storage units he rented to hold the collectibles he purchased with embezzled funds.

Blevins had little chance of beating the rap on this one, so he pleaded guilty. He is awaiting sentencing. Blevins has been said to be cooperative with investigators, undoubtedly hoping for a reduced sentence. One of those acts of cooperation was to testify at the trial of his longtime friend, Deutsch.

Blevins testified that one afternoon, the power went out to a storage locker, shutting down the sensors. He said Deutsch then suggested they use the opportunity to take some of the comics. According to Blevins, Deutsch said that with such an enormous amount of goods, including 50 boxes of comics, no one would ever notice if two boxes disappeared. They waited until others left and took some comics, arriving early two days later to steal some more. Evidently, they did not realize that such valuable comics would readily be traceable by their attributes, regardless of how small a part of a large collection they were.

All along, Deutsch maintained his innocence, pointing out that it was only Blevins who was ever seen with their possession, and claiming he acted alone. However, it was Deutsch who possessed the keys to the storage units and controlled their access. As tarnished as Blevins' reputation was, the jury found his testimony and explanation more believable than that of Deutsch. Dustin Deutsch was convicted and, a few days later, sentenced to five years in prison.