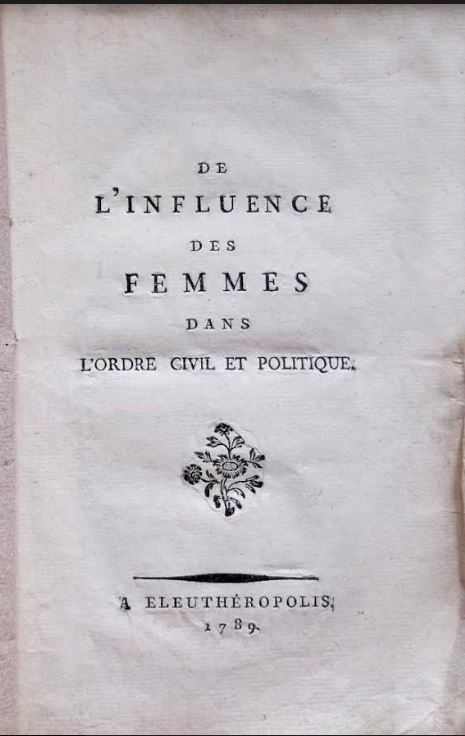 The power women have over men is not a negative thing;

it’s a gift from Nature, it was meant for the happiness of mankind.

It is a modest booklet of 54 pages entitled De l’influence des femmes dans l’ordre civil et politique / Of the Influence of Women in Politics and Civil Order. But the topic and the date of publication, 1789, make it worthy of attention. As a matter of fact, it happens to be at the root of feminism—well, in a slightly macho way. The first paragraph of the famous Declaration of the Rights of Man and of the Citizen of 1789 reads: “Men were born and remain free and equal in rights...” Suddenly, a bold and female voice rose: “What about women?”

Taking the lead of the liberation struggle of “too weak a sex, which has been oppressed for too long” (Rêveries patriotiques), Olympe de Gouges (1748-1793) became the ultimate figure of French “feminism” during the Revolution. An educated woman very much involved in the “philosophical” ideas of the time, she was of all the good fights, from the abolition of slavery to the abolition of privileges. But her most remembered exploit is the Declaration of the Rights of Woman and of the Female Citizen (1791), a sharp reply to the Declaration of the rights of Man... And it is no lukewarm manifest: “Considering that ignoring, forgetting or despising women caused all public grievances, (women) have decided to expose their natural, holy and inalienable rights in this solemn declaration.” The term of “feminism” is an anachronism, but it best describes this fiery woman, who was eventually beheaded on the guillotine.

Other revolutionaries evoked the rights of women. In 1790, Nicolas de Condorcet (1743-1794) wrote, in The Admission of Women to the Right of Vote: “Whether no human being has true rights, or they all have the same ones; and he who votes against the rights of others on the ground of religion, colour or sex, is denying his own rights.” But not everybody regarded the rights of women as crucial. In Trois femmes de la Révolution (BNF Collection), the modern historian Léopold Lacour writes: “During the first months of 1789, appeared a sort of “feminist” agitation. Mocked in most pamphlets, the matter of the vote of women also gave birth to serious writings such as Requête des femmes pour leur admission aux Etats Généraux, Protestation des dames françaises contre la tenue des Etats prétendus généraux, De l’influence des femmes dans l’ordre civil et politique, etc...” Thus, our little booklet is quoted among a handful of serious writings!

According to the National Library of France, our booklet is anonymous. But in his book Théologie et politique au siècle des Lumières (1770-1820) published in 1973, Bernard Plongeron attributes it to “a deputy of the Etats Généraux (the revolutionary assembly—editor’s note), the honourable lawyer Antoine Sevran from Grenoble (1737-1807).” Plongeron even says that his booklet did inspire Abbot Grégoire’s Of the Influence of Christianity Over the Condition of Women (Paris, 2nd edition, 1826, 132 p. in-8°). One thing is for sure, our booklet was written by a man; and he couldn’t hide it, even while advocating that “in order to break asunder the chains that hold us captive, we must make women a part of our fight: they must stand by the freedom fighters!” The first 28 pages draw up a sort of historical catalogue; the author lists various female deeds of importance. Esther, denouncing the plot of Aman and “saving her brothers, and freeing the empire from a monster”; Semiramis, the Queen of Babylon, who “conquered the whole of Asia and ruled the largest empire that had ever existed”; in more recent times, he talks about Anne Boleyn, whose misfortune “destroyed the Popish authority, and soon Catholicism, in England”; of Elisabeth 1st, who “humiliated Spain” and “built the maritime glory of England.” Our author did not hold courtesans in high esteem—he acknowledges the tremendous influence la Du Barry or la Pompadour had on French politics, but magnanimously adds: “let’s not blame French women for the crimes committed by a handful of them only”—a manly piece of advice, indeed.

The revolution was a period of great social progress. But while slavery was abolished—though later reinstated for a while by Napoleon—, women still had a long way to go. Emphatically evoking “the power and the holy duty women owe their country”, the author of our pamphlet confines them to a domestic role. As a matter of fact, he sounds paternalistic: “I will now tell you what women must do against the peril facing our country.” First, he recommends them to be good mothers. “Today, you must create citizens, and blow patriotism into the minds of your children (...). The mother must turn her household into a patriotic university.” Far from the revolutionary assembly, household was their kingdom: “Our freedom must be rooted in the bosom of the peaceful occupation of domestic life.” But they were also urged to fight on another battlefield, the hearts of men: “It is against despotism that you must arm your charms; against it that you must exalt the courage of your admirers.” Our author even suggests that a man should swear to defend his country against despotism before making love to a woman. “Whose man would dare breaking such a promise?” he asks, before adding: “Such is the privilege of women, to command both the mind and the heart.” Ite missa est.

Our author added several notes to his text; one of them reminds us of a paragraph written by Guillaume-Thomas Raynal—it is believed that Diderot himself wrote this part of A philosophical and political history of the settlements and trade of Europeans in the East and West Indies (1786)—about slave owners! It deals with the way the males of various countries treat their women: “The English love more than they respect them; the Northern peoples are interested in reproduction only; could the Ottomans love them? To them, they are only machines to satisfy their pleasures. Esteem and confidence—the charms of life—, are banned from their relationship. (...) The Italians only love them by outburst; and they often offend them—and nature—out of an unworthy and shameful preference. To end up, the Spaniards tyrannize them with adoration.” And guess what? “Only the French know how to love, esteem and respect women.” Á votre service, mesdames!

No doubt a woman like Olympe de Gouges couldn’t be satisfied with this paternalistic vision of the role of women in the state affairs. But she was conscious of the hardship ahead. Wasn’t one of her famous writings entitled “a patriotic daydream”? And the dream turned to nightmare when, following the inevitable political shifts of these troubled times, she was eventually executed in 1793. Her Déclaration des Droits de la femme et de la Citoyenne remains, though. And our surprising booklet, though supposedly siding with women in their struggle towards emancipation, was yet another obstacle in their way. Let’s bear in mind that the right to vote wasn’t granted to French women before 1944—one hundred and fifty five years after the Revolution. Meanwhile, “all males remained equal...” Females were required to patiently wait at home. It takes time for some dreams to come true.