There is always more: Edwin Whitefield 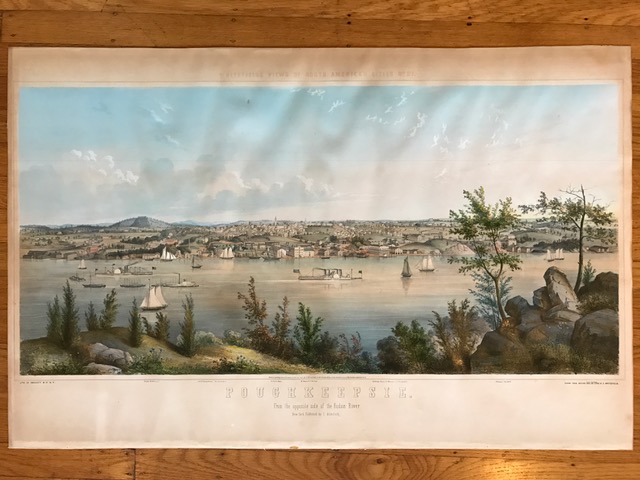 Recently I was reading Antiques & Arts Weekly and chanced upon a 3-column ad for a Poughkeepsie print.  As it’s within my collecting focus I called the advertiser, Holden Antiques, to inquire and Ed Holden quickly explained he would offer his best price and that would be that.  He apparently had fielded other inquiries but the price had seemed to them a bit steep.  He had it listed at $1,150 but would let it go for $950.  He then quickly excused himself as if to say goodbye as I asked for his mailing address.  “Why” he asked?  “I’m going to send you a check.”  “You are?”  “Yes, and what about the shipping?  He said $200 and I asked him to reconfirm the size:  Frame dimensions were 40.5” x 27.75”, engraving dimension 34” wide x 16.5” high.  This was one of the few known large prints of Poughkeepsie executed by Edwin Whitefield.  Others who inquired may have thought this was the common 5” x 8” version Whitefield had done in 1845.  This larger version is dated 1852.

Whitefield was an engraver.  He’s not a household name although records associated with him are in the RBH Database.  Initially I searched for E. Whitefield as that is how his name appeared on the Poughkeepsie print.  Subsequently I realized that E. was for Edwin and ran that search.  The first search had 7 results in the RBH Database and the later 73.  Fifty of the records relate to a book that Whitefield published in several editions in the 1880s.  The balance mainly relates to North American Scenery, published in 1847 and to the occasional large format prints he executed between 1846 and 1865.  According to Donald Heald, the New York dealer who has made a market in Whitefield material for more than twenty-five years, his work is frequently first rate and his skill set, among the best of his era.  Nevertheless he is, and remains, mainly unknown.

He both wrote his own books and illustrated other author’s work.

And there have been books written about him.  Hudson River Houses by John Zukowsky [1981] and Bettina A. Norton, in her book Edwin Whitefield – Nineteenth Century North American Scenery published in 1977, wrote about the New York Public Library’s Whitefield sketchbook and mentions:

“By the time of the publication [1852] of [the] Poughkeepsie [large format] print, Whitefield’s handling of the foreground was fully developed, and, with its topographically attractive horizon with College Hill, its varying tones, and its skillful drawing, it is one of the most attractive.”

May I admit I’m happy neither the dealer nor the other prospective buyers read that.  The price would have been higher and the print long gone when I called.

But if its obscure it is also rare.  A check of inventories suggests that New York Public and New York Historical Society have copies.  The Minnesota Historical Society has prints from his later career but no example of Poughkeepsie.  Boston Public also has his material but lists only 4 four Massachusetts scenes among its holdings.  In the OCLC there are references to Whitefield and some of the books he illustrated and there is a reference to the 1852 Poughkeepsie print but no locations given.  In Whitefield’s own records he describes his Poughkeepsie print as No. 27 in his Views of American Cities and the OCLC reference to it seems to be a reference to this list rather than to a specific example.

The print is rare.  No question about it.

Poughkeepsie was in its golden moment and Whitefield captured it.  This city on the Hudson was important in the 1820 – 1860 era of the Hudson River as America’s Broadway but, by 1852, the pendulum of American growth was swinging west and this survival is one of the clearest images we have of what Poughkeepsie was like then.

As to what it’s worth the parameters are size, condition, rarity, importance, significance and of course, how many people care.

The printed and hand-colored piece is robust at 16.5” x 34”[image dimension] and the condition very good.  I’m no expert but there are neither tears nor discoloration.  And the print is rare but why isn’t clear.  Was it produced in just a few copies or were they too fragile to survive?  Perhaps both.  Important is to some extent what matters to you.

As to significance the image offers a unique highly detailed view.  Ten years later photographic images would begin to appear but no images of Poughkeepsie of any significant size appear for another decade or two.   So this print is probably the best image of the city in that era.  But who knows?  Many people inquired about the print and it was still available when I called.  I think they were confused and I just lucky.  Certainly some, perhaps all, who inquired thought it was an example of the 5” x 8” print of Poughkeepsie he executed 7 years earlier.  That print is worth $200 to $300.

Ed Holden remembers another copy coming up at Cal Smith’s auction in Pleasant Valley nearby in 1977.  He recalled that the price was driven by the Banta Family who owned the Steak and Stein Restaurant in Wappingers and that the price was more than $2,000.  What would have been a big price then today, using the calculations provided in Rare Book Hub, is $10,827.40 and that sounds about right.

In any event it’s a gem and I’m grateful to have it.