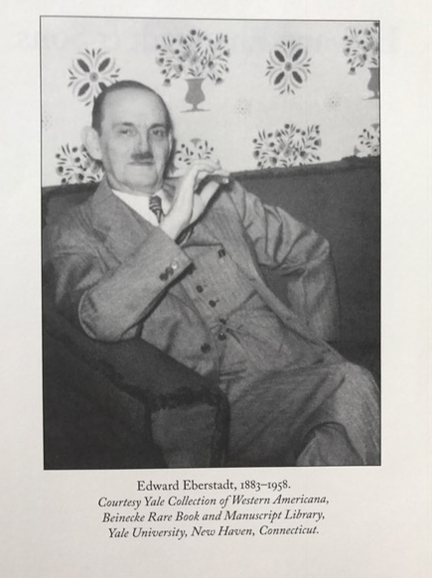 Edward Eberstadt & Sons was in the 20th century, to quote William Reese who wrote the forward to Mr. Vinson’s interesting book, Edward Eberstadt & Sons, Rare Booksellers of Western Americana, “the largest and most influential dealer in important books and manuscripts relating to the American West.”  The firm, which was organized in 1908 would continue through two generations of Eberstadts ending in final disposal in 1975.

Many of the firm’s important catalogues were reprinted as a set in 1965 and today these records are included in search results in the Rare Book Hub Transaction Database.  Not many dealer catalogues have made this cut.*

Michael Vinson, the western Americana specialist, has written a book about the Eberstadts and in particular Edward Eberstadt.  He was a dealer and market-maker in a category of Americana that became a specialist area during the years he was a dealer in New York.  He handled very good books with the aplomb of a storyteller who knew both how to regale and sell.  He was a master and Mr. Vinson has brought him back to life based primarily on his correspondence that was given by his family to the Beinecke Library at Yale after his death.  This is a book well worth the read.

Mr. Eberstadt always wanted to be an honest man but when that failed he became a bookseller.  He wasn’t a crook and no, he wasn’t dishonest.  Not at all.  Rather he mastered the arts of finding the best material and charging the highest prices; something that would be harder to do today when copies and prices can be evaluated on the Internet.  So he checked other dealers’ catalogues and bought aggressively.  As I recall we have in our records the simultaneous catalogue runs of Midland Notes, Goodspeed’s and Eberstadt.  And when I looked at Goodspeed’s and Midland a few years ago you could see their copies moving into the Eberstadt stock.  And now it's clear where they often went:  into the best collections at the highest prices.

As to how the Eberstadt descriptions and their determinations of importance have held up we now know for even under the intense scrutiny possible using the Internet, their references still appear.  But all skill sets have their day and the Eberstadts’ are most powerful when seen through the lens of a rear view mirror, the very mirror Mr. Vinson’s has provided.  Here’s how.

Great dealers often have exceptional memories and Edward’s was among the best.  They are also sometimes graceful correspondents.  He was both.  The principal collectors and institutions in the category collected books and papers as well as the conversations, bon mots and ideas of the acknowledged master of the trade.  In some sense, if you were a great collector in his category in the day, you wanted to buy from him.  He was that good and it confirmed your connection with him.

His customer list would, in time, include many of the great collectors.  Huntington, Wagner, Streeter, Coe, the Beineckes, Graff, and DeGolyer, all of them serious players, all his customers as were many, perhaps most of the important collecting libraries of the era.

The Eberstadt correspondence with institutions also suggests acceptance by scholars of his scholarship.  That is rare, possibly rarer than any of the books he sold them.

He and his sons, Charles and Lindley, today are remembered particularly for having produced extraordinary catalogues that became, even in their own time, essential documents for collectors, dealers, and institutions.  Not many dealers’ catalogues reach memorable status as theirs did.  Interestingly, Argosy, in New York, still has three complete sets of the 1965 collected reprint.  Serious collectors of the American west will, as five generations of readers already have, find them to be a powerful learning tool.

How and where to find this book?  On Amazon or Oak Knoll.

Or, meet Michael at the ABAA Fair in Oakland, California February 10 – 12.  He’s at booth 813 and will have a dozen or so copies with him.  Obtaining a copy at the show guarantees your show experience will be a success.