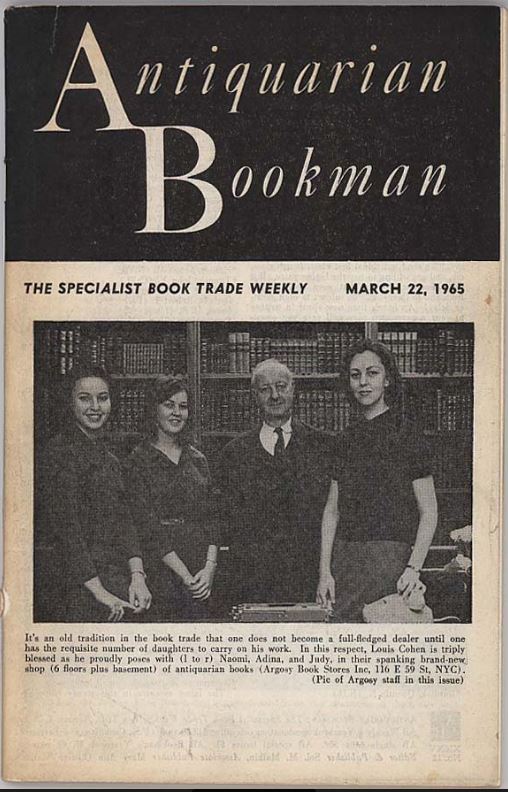 At one time the Antiquarian Bookman was the bible of the book trade.

I grew up in a family where book selling was a well established business. By the time I was a little girl I was drafted into it.

From the 1950s through the mid-60s I was introduced to all the traditions of the trade by my two very different parents and earned my spending money working for them. They were specialists and did most of their business by mail. We did not have an open shop.

My father was the buyer and the cataloger. He was the person who never met a Goodwill Store he didn’t like and if buying some books there (or anywhere) was good, buying more books (many more) was better. In those days I did not know the meaning of the terms “not enough inventory” or “no new inventory.”

There was inventory on every flat surface of our home and shop. The problem was never “Do we have it?” rather, “Do we remember where we put it? Where did you see it last?” Deciding what to buy was my father’s department. His idea of “shopping” was to buy everything that appealed to him.

My mother’s job was to apply the brakes. She was the seller, the packer (or rather the boss of generations packers including me). She was the issuer of catalogs and lists (which my father would write) and the schmoozer of librarians. In my youth some of our best customers were formidable people, mainly women, who ran the acquisitions sections of university libraries and bought books for academics and scholars. Our field was South East Asia. When the Vietnam war came along interest in books about SE Asia grew considerably, but that is a different story.

I grew up reading the AB - short for Antiquarian Bookman (I read it in the john where back issues were kept. The current issue lived on my father’s night table.) The john was also the location of any stray Maggs or Quaritch catalogs that my dad was done with. It took me quite a while to catch on that some of these catalogs were out of date by maybe 30 or 40 years, so unfortunately it was no longer possible to buy a Rembrandt etching for 9 pounds, but that also is a different story.

The AB was the way that book people stayed in touch with each other. We read this digest size weekly magazine. It was printed entirely in black and white, with grainy halftone photos, zillions of little want ads for book sellers and generally an article or two aimed at the trade. We all read it and we all did business through it.

What wasn’t done via the AB was done by sending out postcards, known as “quotes” through the US mail, issuing catalogs, taking buying trips to other towns, or attending shows. Not only was there no Internet, but the fax machine had yet to be invented.

There was, however, the mimeograph with its gorgeous semi-indelible purple ink that left stains on your hands and clothing that took a long time to come off. Children in the book business were expected to turn the handle of that mimeograph frequently, and also to pack to the standard that would pass muster with their very particular mother, who had a long and specific list on how this task should be done.

I packed my way through junior high school, high school and college, standing under a single light bulb working on a board over a wash tub in a basement room shared with jars of homemade pickles that smelled of garlic and dill. The mail carrier (in those days all men) came every day to take the fruits of my labor off into the world. Some of my earliest memories are my mother and her ongoing soap opera with the post office and its employees, none of whom (like me) were quite up to her specs.

However, if she is looking down from the great beyond, she will be pleased to read the many and frequent feedback comments on my “superior” packing skills left by satisfied customers.

We sold a lot of books that way, enough to put two kids through college, to take regular trips abroad, and to enjoy the lifestyle and camaraderie that went with having a lot of books. But as you probably know, it isn’t done that way any more.

I know this because as I start on my taxes for 2016 I realize that though my parents are both dead and I have been in the business myself going on 40 years, what I have to show for this long running enterprise seems like pretty thin soup compared to the time and energy I’ve invested in it. It pays my health insurance, covers some of my expenses but, at best, it is a pale shadow of the robust business my parents had back then.

My dad always said it took five generations to make a really good dealer, the first four were to lay in and age the inventory and the fifth to cash in on the good instincts of the earlier members of the tribe. Sitting here at the tail end of the second generation I predict there aren’t going to be too many more of us in that mold, if only because taste has changed so rapidly and the definition of what is valuable or worth having has changed even more.

My dad’s favorite book was “Jurgen” by James Branch Cabell, and ‘Yes’, I still own his copy, and ‘No,’ it’s been many decades since I even attempted to read it. History has not been kind to some of the writers my dad liked: Sinclair Lewis, Booth Tarkington, William Carlos Williams to name a few. I could not give away Wordsworth, one of his favorite poets (“The world is too much with us late and soon; Getting and spending we lay waste our powers….”). So if you’re holding on to an inventory of books that nobody reads or wants anymore, life is not so beautiful. If, on the other hand, you are completely out of inventory and relying on what comes to you via the free boxes, well here's my two cents on that subject.

My favorite sale of 2016 was the auction for a little paperback book of poetry autographed by Seamus Heaney that I found in the free box at a church rummage sale, and after 14 bids sold for $76 on eBay. It made my day.

Aside from the obvious differences in the technology, taste and value, the whole idea of “inventory” has changed a lot too. Last year my best sales involved inventory I didn’t own and only passed briefly through my hands. Some of the best and most profitable transactions were done with the help and cooperation of colleagues, and those same colleagues were some of my best customers.

This year my lowest sale was under $10 and my best one over $4,000. In between was every other possible permutation and combination. Less and less of it was books, especially big books, and more and more it was ephemera, magazines, photographs, and similar items. If it was books, they were mostly small enough to fit in a flat rate priority envelope. The value of my individual average gross sale was just shy of $60. Adjusted for fees, shipping and other costs it looked a lot more like $39.

Of the books I inherited from my dad, including that once long shelf of humor, especially vintage New Yorker cartoon albums, I have one broken lonely item I’m keeping to remind me of the years of pleasure I had reading and re-reading them. Of the dozens of volumes of the Bureau of American Ethnology from 1879-1935 or so I have only a few disbound items left. Not only are they all gone, but if I had them again today I don’t know if there would be buyers?

Though the dealers’ daughter is not as upbeat as she once was, neither is she quite as gloomy as it may sound. In 2016 I had a serious illness, “life threatening” as they say, and I pulled through. I didn’t work from mid-May until August. When you almost but not quite die, everything that comes next looks beautiful.

Wiki for the Antiquarian Bookman at: