A Library Plans to Sell a Valuable Century-Old Book Collection 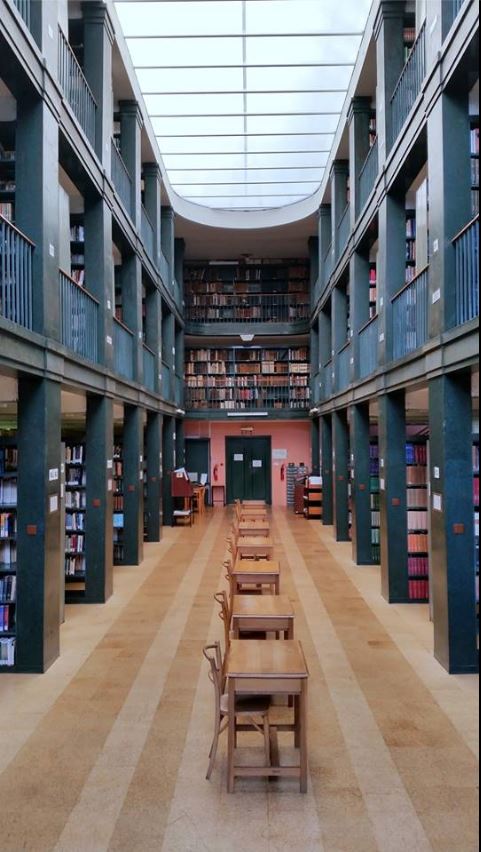 The Jesuit Library in Ireland (from the library's Facebook page).

Important old books tend to become harder and harder for collectors to find, as the best are either purchased by or given to institutions. Once there, it is expected they will never return to public circulation, making it difficult if not impossible for private collectors ever to own a copy. However, in recent years, a few institutional libraries, either from financial need or inability to properly care for collections, have reversed the trend, putting books long out of public circulation back into the market. A major such example was recently announced in Ireland. A large collection of books held in the Jesuit Library near Dublin for over a century, including many items of incunabula (books published prior to 1501), will go up for sale next summer.

Slated to be sold is what is known as the "O'Brien Collection" at the Jesuit Library. It was bequeathed to the Jesuits on the death of Irish Justice William O'Brien in 1899. O'Brien was an Irish judge, book collector, and devoted Catholic. According to his obituary in the Law Times of 1900, his opportunities as a young man were limited by his faith, but he nonetheless stood by it. Over the years, he supported various Catholic organizations, so it is no surprise that he gave his valuable collection to the Jesuits when he died. According to the Irish Times, which reported the news of the planned sale, "thousands of books" from the collection have already been shipped to Sotheby's in London for the sale. That sounds like a surprisingly large number. Some items have been held back, specifically ones the National Library of Ireland requested be placed with them on a long-term loan. The value of those being put up for sale is estimated at £1,500,000 (or about $1.9 million).

According to the Irish Times, Sotheby's described the collection as "one of the most important of its kind to come to the market." It is said to contain rare printed books from the 15th century, early Shakespeare editions, literature, and medieval manuscripts. What exactly is in there has not been published. A catalogue of incunabula at the Milltown Park Library (Jesuits) published in 1932 listed 117 items of incunabula bequeathed to it by William O'Brien in 1899. Presumably, many of these items are among those to be offered.

This does not appear to be a sale motivated by a severe need for money. The Jesuits have good uses for the funds, including upkeep of churches, caring for invalid priests, religious education, and relief of the poor. However, the Jesuits have a painting on "indefinite loan" to the National Gallery said to be worth $50 million. That is not the behavior of an institution that badly needs funds. Two other factors were cited. A spokesperson for the Jesuits was quoted as saying the books and manuscripts "are of such an age that they require specialist care and conservation." A sale would “allow for these precious books to be properly cared for and appreciated." That is indeed an issue for institutions with valuable old books that do not specialize in book preservation. Selling the books may be kinder than keeping them.

The other factor was the lack of use of the collection. A Sotheby's spokesman was quoted as saying the library "has barely ever been consulted by students or scholars in the past 100 years." Add to that the fact that Dublin has other libraries with similar material and it made sense to the Jesuits to let this go. It's not like the library will be lacking in books for scholarly study. They still have over 140,000 volumes.

As to whether any controversy will arise, as always seems to be the case in these situations, we don't know. The Jesuits seem to have put everything in place to make this a fait accompli before anything was announced. The decision was made, the National Library was given a chance to say what should not be sold, an export license was obtained from the government to ship the books overseas, and they were sent to London. A sale date has been set for June 7, 2017. This is a decision that will be hard to undo.

Now, here is a cap on a story that ended differently. In 2015, Gordon College, in Wenham, Massachusetts, announced that it would be selling part of a collection it had received in 1921. In that year, the heirs of Edward Payson Vining gave his book collection to the college. It contained 7,000 books. Vining was an officer of the Union Pacific Railroad, who retired relatively young and occupied himself with research, writing, and book collecting. He had a few odd theories, such as that Hamlet was a woman, and America was first discovered by Afghan monks, but a little eccentricity never hurt anyone. Gordon really didn't much know what to do with his collection, so for years, many of the books remained packed in boxes. Nonetheless, when the college announced it would sell some of them, it raised some strong opposition among faculty and others.

The college had moved well along in the process at the time. They had selected 10% of the books from the collection to sell, and hired Doyle New York to conduct the auction. A date had been set. The purpose, officers of the college explained, was to raise funds so they could adequately preserve the remainder of the collection. Though only 10% of the collection was to be sold, it too was valued at around $2 million.

Ultimately, the objectors prevailed, or at least, they convinced the administration to change its mind. Last summer, the college announced that it was withdrawing the sale and would seek other sources of funding to maintain the books. That has evidently been accomplished, and last month, Gordon announced the first exhibition highlighting some of the long mothballed Vining books. An exhibition of some of the Vining books is being held at the Barrington Center for the Arts on the Gordon campus. It is entitled Vining’s Shakespeare: Highlights from the Edward Payson Vining Collection. The exhibit is free to the public and runs through January 16. Among the highlights of Vining's collection are Shakespeare's second and fourth folio. Other books on display include a 1611 King James Bible and a 1755 Samuel Johnson dictionary. And, there will also be a few items written by Vining himself, including one where he exposed Hamlet as a woman and a lecture he gave to New York's Shakespeare Society. There is even a clip from a 1920 German film in which Hamlet is portrayed by a woman.