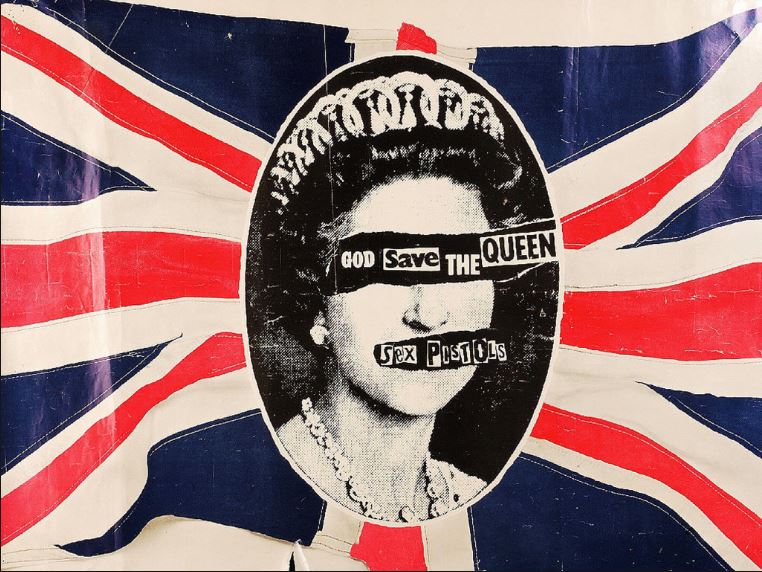 God Save the Queen.

A collection of ephemeral material said to be worth £5 million* (about $6.3 million U.S. dollars) went up in flames on November 26 last. The fire was deliberate. It was a protest. However, while reminiscent of the fires that raise horror in every intelligent person's heart – book burning – this was not a protest against what was being burned. It was a protest against its debasement. Better to see the movement it represents put to the torch than see it appropriated by those it sought to destroy. Punk is dead, its remains cremated on a boat in the Thames. Order has been restored to the U.K.

First, we need to recall a bit of history. In 1975, the legendary/infamous British punk group, the Sex Pistols, were formed. Punk already had its underground following the U.S., but the British version took its country by storm. Of little controversy here, because it was little noticed by the mainstream in the U.S., punk could not be ignored in the U.K. For this we can thank the Pistols' creator and manager, impresario Malcolm McLaren. McLaren was to the Pistols what Col. Tom Parker was to Elvis. Parker turned an obscure country and western singer into the biggest rock star America ever saw. But Elvis was, at least, a musician. McLaren had less to work with, so while Parker achieved the needed controversy to create a star with a little wiggling of the hips, McLaren required a full scale assault on British values and morality to achieve his goals. The Sex Pistols graciously supplied it.

Exactly forty years earlier, on November 26, 1976, the Pistols released their anthem, Anarchy in the UK. It was a punk anthem, an attack on the proper British order. Meanwhile, the band members lived an over-the-top destructive lifestyle, deliberately insulting everything proper. Their behavior, along with their lyrics, were intended to offend the British public to the extreme. The disenfranchised young loved it, proper society despised them.

Britain did not have to put up with the Pistols for long. They self-destructed. By 1978, the band was no more. The following year, their most flamboyant member, Sid Vicious, had killed his girlfriend and then himself (the latter with an overdose). The others moved on. McLaren, ever the impresario, also moved on to other ventures. The flame burned brightly, left its mark on British culture, and quickly went out.

McLaren died in 2010. He died with his collection of Sex Pistols ephemera – clothing, records, papers – still in his possession. It was inherited by his son, Joe Corré. It was Corré who put his father's collection to the fire a few weeks ago.

The inspiration for that decision was something called Punk London. It is a year-long celebration of forty years of punk. It has the support of London's mayor, and reportedly, even Queen Elizabeth. Elizabeth was Queen then as now, and the target of the Pistol's song God Save the Queen. Corré was appalled. When he announced his plan to hold a bond fire, Corré issued a press release stating, "The Queen giving 2016, the Year of Punk, her official blessing is the most frightening thing I’ve ever heard. Talk about alternative and punk culture being appropriated by the mainstream. Rather than a movement for change, punk has become like a f...ing museum piece or a tribute act." Rather than see McLaren's collection eventually sold as memorabilia to collectors with the greatest amount of money, Corré preferred to see it destroyed. Better to die young than live on as an old shell, collectible trophies for those who never understood or appreciated what the movement was about. As Corré further expounded to those attending the event, "Punk was never meant to be nostalgic. Punk has become another marketing tool to sell you something you don’t need."

This story elicits mixed emotions. The preservationist, historian, keeper of the culture in me is appalled. The history of our times needs to preserved, so future generations can know, understand, and perhaps avoid some of our mistakes. This is little different from a book burning. Still, the other side understands Corré's sentiments. Preservation by the establishment, the very institutions the punks railed against, is a cruel irony, a debasement of the values and ideals the punks represented, whatever those might be. It is the ultimate conquering. It is better to be consumed on the pyre than caged in the Queen's museum. My God, it is the same Queen Elizabeth, ridiculed in the song God Save the Queen, who still reigns, and apparently is welcoming the celebration of her defeated one-time provocateurs.

And then, the Pistols themselves and their punk movement also elicit mixed emotions in me. Truth to power, or at least, idealistic opinions to power, has always been a hallmark of my now aging generation. A hard rain's gonna fall. Tell it like it is, no matter how much they don't want to hear. But, coarseness never appealed that much to me. It doesn't fit that well with peace and love. Perhaps the Pistols' in-your-face style was necessary to be heard. The 70s were different from the 60s, and maybe even Dylan would have had to write lyrics like "go f... yourself" to be heard then. However, that coarseness goes on, and grows. Our culture is filled with it, our TV screens are filled with it, the internet is consumed with it, and America's most recent presidential election plumbed depths I'd never imagined we would see. The Pistols were revolutionary in their day. Today they would be mainstream. For better or worse, the times they still are a-changin'.

*I'm not sure how Corré or whomever calculated that value, but it does seem a bit generous to me.