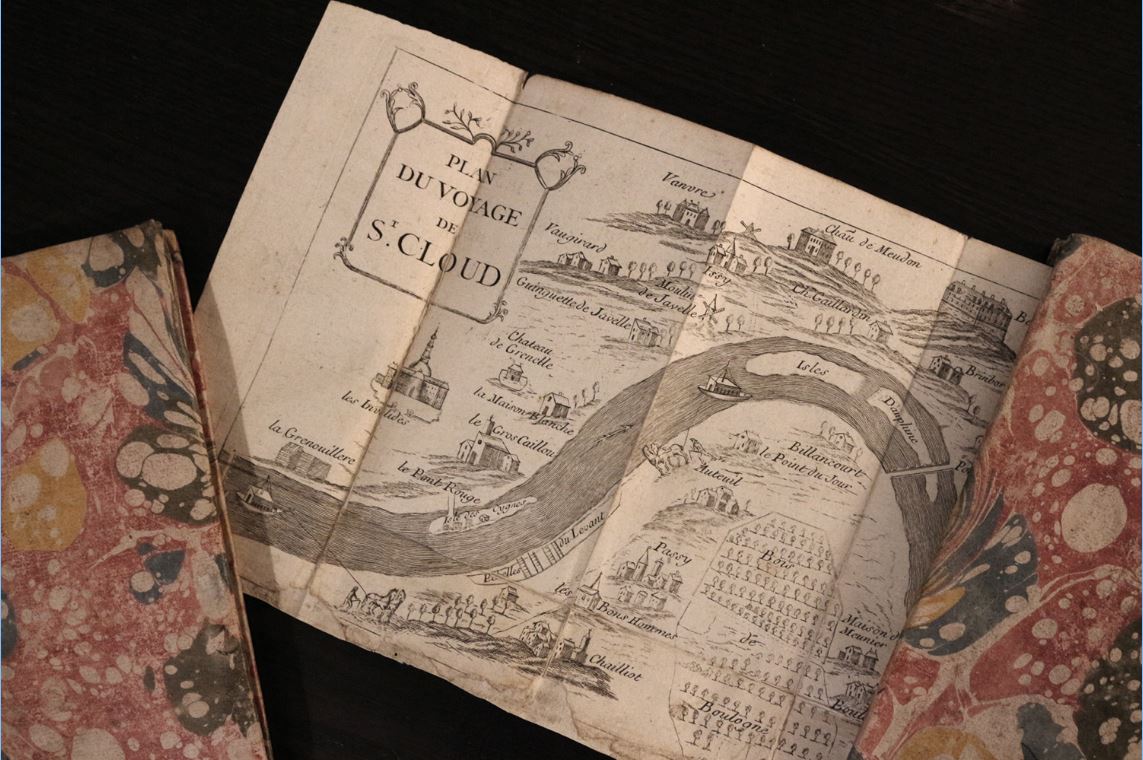 Map of the voyage to St. Cloud.

According to the authoritative Larousse dictionary, the French word “badaud” refers to someone who “wanders around town, being curious of the various spectacles of life, and stopping to contemplate them.” But in the 18th century, a “badaud” was a simpleton, a typical Parisian character depicted in a funny booklet entitled Le Voyage de Saint-Cloud par Mer & par Terre (La Haye—in fact, Paris—, 1748). “We could hardly give a better description of the ridiculous amazement of a young man without experience, who leaves the maternal house for the first time,” states the preface of the recent Douin Editions’ reprint. The “bel-esprit” was, according to the Parisians, endemic to the capital and Versailles—of course—, and couldn’t reach beyond what they called the barriers of Paris—where taxes were collected from entering goods.

Travel books, loaded with extraordinary tales of unknown and remote regions, have always commanded the unconditional respect of the public; but they have also generated an apocryphal literature made of utopic fables, fake tales of made-up travels, as well as satirical works. As a matter of fact, Louis Balthazar Néel (1695-1754) enjoyed considerable success with his 66-page long satirical work: Voyage de Paris à Saint-Cloud par Mer & par Terre / Voyage From Paris to Saint-Cloud by Sea and Land. “Néel apparently had two ideas when writing it,” comments the preface of the Douin’s edition. “First, he meant to mock the obvious pedantry of these travel books, in which the reader is spared no detail, except the useful and agreeable ones. Second, to laugh at the ignorance of the “bourgeois” of Paris, who stupidly wondered at any casual thing as soon as they stepped out of their houses.”

The narrator of this voyage is invited to visit his fiancée’s family in the nearby town of Saint Cloud—it touches Paris—, and has no choice but to face the raging elements. He sees the Seine River as a pitiless ocean, and Saint Cloud seems to stand at the ends of the world. No wonder the world is so unintelligible to him, he was born a Parisian—hence his condition of true “badaud”. “Before my travel,” he admits, “I thought that everything grew on trees (...), from the wheat to the grapes to the vegetables of all sorts. (...) The roasters, I thought, built their own poultry, just like the soft drinks manufacturers make their chocolate.”

En route to Saint Cloud, our narrator has a very loose idea of where he really is—the author added a map to the fifth edition of his book, thus reinforcing its satirical dimension; indeed, travel books have always been valued for their maps. “I asked whether the Company of the Indies was sailing the very same river while going to Japan, where it buys those beautiful clothes that are sold in Paris? Were we still far from Cap Breton1? Was there not a risk to come across some Russian sailors on their way to the Netherlands?(...) I noticed that everyone was laughing at me when I asked questions. But it didn’t matter to me, as long as I was taught new things.”

Reaching the city of Chaillot, “I pointed to an abbot beside me that, at the time of the Crusades, this town had probably been almost taken by the Turks, since their ladders were still laying against the walls; or was it what our most eminent voyagers call the “ladders of the Levant” 2? But he answered that (...) these ladders belonged to the laundresses, who used them to wash their clothes.” The said laundresses soon disabuse our voyager by cursing him like savages from the riverbank, and even showing what might be described as the “bottom of the Levant”! Afterwards, upon reaching the neighbouring city of Passy, the narrator starts to panic: “I jumped on the upper deck to search for Paris with my telescope. I found her, but couldn’t recognize her. She was but loads of stones and chimneys. Where had my Paris gone? I could make out no street, not even Geoffroi l’Asnier Street, where I resided. I was surrounded by nothing but a threatening sea ready to swallow me up; and in the remote, some unknown southern lands, and pure fields! I turned towards Paris and said: Ô you, who has bred me, sublime Paris! Why are you drifting away from me? (...) I’ll be back soon—so help me God! —, and I shall spend the rest of my life in your bosom.” Poor little “badaud”...

The little author of a little book

Néel defines himself, in the preface of the 5th edition of his book (Paris, 1783), as “the little author of a little book.” He points out that, upon writing it, he had no other ambition but to entertain others while entertaining himself. A true satirist, he then adds: “And I’d rather have my book sold in the blue collection (the very popular peddling books—writer’s note) than confidentially read in a full morocco binding.”

His voyage was very well received. The Observateur Littéraire reads: “This is quite an entertaining booklet, and I advise you to add it to your collection among your best books. There’s more spirit in these 66 pages than in the chaos of most of the in-folio books you’ve read.” Néel underlines in the aforementioned preface: “Several of my friends complain that my book seems to ridicule the people of Paris. Truly, the portrait I’ve drawn of the “badauds” is so striking that it is like, so to speak, catching life red-handed!” Furthermore, he adds that the first edition had already become quite rare in 1748: “If a handful of copies are still around, they are but very few.” The book was printed five times between 1748 and 1783. The 5th edition even features a lovely map—see illustration—, an unnecessary second part written by Lottin L’Aîné (it was published as soon as 1750), as well as a serious—and thus totally off-topic—chronology of the history of the city of Saint Cloud.

The 1844 edition (Lahure, Paris) is also valued today, thanks to Jeanniot’s illustrations; and as previously mentioned, it was recently reprinted. This satirical portrait of the Parisians is what makes it so attractive, as underlined by Mercier in 1783, in his Tableau de Paris (Amsterdam): “It mocks both the ignorance and indolence of some Parisians, who have never left their homes but to go to their nurses’ and back, who dare not venture beyond the Pont Neuf3, and who confuse the most remote places on Earth with some neighbouring cities.” This gives you a true definition of what was then a “badaud”. “He thinks,” resumes Mercier, “that the Bois de Boulogne4 is the ancient forest where the Druids used to live; he mistakes the Mount Valérien5with the Calvary upon which Jesus Christ spilled His precious blood (...). Back to Paris, he is warmly welcomed by his relatives, and his aunts, who haven’t ever been further than the Tuileries6, consider him as the boldest traveller ever.” The idiocy of the Parisians was apparently proverbial. “Some bourgeois,” reads H. Audifre’s Dictionnaire de la conversation... (Paris, 1833), “because of the paintings, the statues and the engravings they see daily in Paris, believe that the Sphinx, the mermaids, the unicorns and the Phoenix do exist. Their credulity is exploited, not only by the crooks and the acrobats on public places, where the herds of “badauds” gather, but also in society.” Could the “badaud” be that stupid?

This voyage is also a victory in the war raging between the Parisians and the rest of the French people—the Provinciaux. In 1699, the “bel-esprit” Jean-Jacques Brillon explains in Le Theopraste Moderne (Paris): “We Parisians call a “provincial” any one who was born two leagues away from Paris.” And he saw those people as, well—savages. “A leopard never changes its spots,” adds Brillon, “mostly if it was born in the middle of a field, or in a city surrounded by woods: such men are savages, a little bit less fierce than the real ones. (...). But let’s cut it short, and let’s not disrespect the inhabitants of the Province—I almost wrote the inhabitants of the bush.” There is something raw about the Provinciaux that irritates people of “good taste”. “For want of politeness, the Provincial makes you uneasy with his civilities; for want of “esprit”, he exhausts you with his compliments,” deplores Brillon. Yet, he confesses: “They don’t have enough consideration for us; probably because we don’t say many nice things about them.” Indeed, if the “badaud” mistakes Chaillot for Jerusalem, the Provincial, for his part, “thinks the King is 30 inches taller than them; and the courtesans look like half-gods to him,” sniggers Brillon. So, who’s an idiot now, uh? This little war is still going on today. Everywhere the Parisian kids go, they are greeted with the traditional song: “Parigots, têtes de veaux!—something like, caring for the rhyme: Parisians, ruffians!; literally, “calves’ heads”. They usually answer by calling their new friends: “pécores!”—the French word for “rednecks”. Charming little bovines’ heads...

Travel books have various forms, and utopias or satirical relations are not only entertaining, they also give us valuable information about the way our ancestors lived among themselves. And it is sort of reassuring—or not—to see that, notwithstanding a few details, be it in the southern lands or in the nearby Chaillot, they used to live—well, just like we do.

1: Cap Breton. This city is 750 kilometres away from Paris.

2: The ladders of the Levant, or Les échelles du Levant, were some ports and cities of the Ottoman empire, located in the Middle-East and on the North coast of Africa, where the French had the right to trade during the 16th century—the term “ladder” apparently comes from the Latin word scala, and describes the ladders used to unload the ships.

4: Bois de Boulogne. A wood in the western outskirts of Paris.

5: Mont Valérien. A hill in the western outskirts of Paris.

6: Les Tuileries. A royal palace located in the heart of Paris.