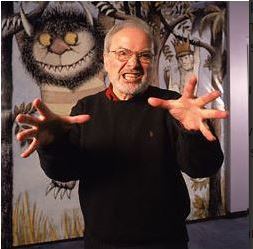 One suspects Sendak would have wanted to strangle the parties for fighting over his bequest (Virginia tech Hillel photo).

A bitter dispute between two of the heirs of famed children's author Maurice Sendak has come to a conclusion, at least until/unless the Connecticut Probate Court's decision is appealed. The war was waged between the Maurice Sendak Foundation in his hometown of Ridgefield, Connecticut, and the Rosenbach of the Free Library of Philadelphia, which housed Sendak's papers for many years until his death. It was a split decision, but most observers believe the Foundation won. It would be hard to argue otherwise.

Sendak kept his personal papers at the Rosenbach in Philadelphia, which held numerous displays of his material over the years. Meanwhile, in his home in Ridgefield, Sendak kept a personal collection of books other than his own, a quite valuable collection. The Rosenbach and most observers undoubtedly believed Sendak would leave his personal papers to the Rosenbach, which had diligently cared for them over the years. What he did, instead, was a reversal of the obvious.

Sendak willed all of his papers, the great majority of which were housed at the Rosenbach, to a newly created foundation in Connecticut. Meanwhile, he willed his rare books, housed in Connecticut, to the Rosenbach. What was he thinking? Obviously, he assumed everything would be just fine between the trustees he appointed to manage his foundation and the Rosenbach. In a display of his expectation of cooperation, his will stated, "It is my wish that the Maurice Sendak Foundation Inc. make arrangements with the Rosenbach Museum and Library for the display of [his personally created writings and artwork] upon such terms and at such times as shall be determined by the Maurice Sendak Foundation Inc. in consultation with the Rosenbach Museum and Library." As one of the trustees reportedly pointed out, this doesn't obligate the Foundation to do anything, wishes not being commands. Cooperation this is not. Not even the Wild Thing would have been so naive in drafting a legal document with many millions of dollars at stake.

The Rosenbach quickly packed up the thousands of Sendak items it held, probably with a heavy heart, and shipped them off to Connecticut. The Foundation was not so fast. It held onto the books, resisting the Rosenbach's entreaties to send them south. Instead, it disputed the Rosenbach's claim on many of the items, saying they did not meet the terms of the bequest. In his will, Sendak bequeathed to the Rosenbach, "All of my rare edition books, including, without limitation, books written by Herman Melville and Henry James." It also gave the Philadelphia museum his letters and manuscripts written by persons other than himself, and his "Mickey Mouse collection."

Clearly, Sendak thought it would be obvious which items in his collection he intended to leave to the Rosenbach. The Rosenbach did, too. The Foundation took a more nuanced look. It concluded the "rare edition books" had to meet all three criteria, being "books," "rare," and "edition." That last one is a bit of a mystery. What is the difference between a "rare book" and a "rare edition book?" Which books are not "edition" books? I am perplexed by what book is not an "edition," unless, maybe, it is a manuscript. Perhaps Sendak was attempting to distinguish them from his manuscripts, but such would have been unnecessary since the Rosenbach was also getting his manuscripts. Ultimately, the court determined that there was a difference between "rare books" and "rare edition books," but did not say what that was, or whether it moved some books from one side of the fence to the other.

The Foundation did turn some of Sendak's books over to the Rosenbach, but withheld 340 somethings (obviously, I can't call them books). Of these, the court awarded 252 to the Maurice Sendak Foundation, and 88 to the Rosenbach. Among those awarded the Foundation were William Blake's very valuable Songs of Experience and Songs of Innocence, considered by most in the book trade to be books, but others might see them as collections of prints. This sounds like a victory for the Foundation, especially considering what was being disputed were items that looked like they might belong to the Rosenbach, while all of the material that looked like it belonged to the Foundation went directly to the Foundation. Each side described a certain amount of approval and disappointment with the verdict, with neither saying they would, or would not, appeal. However, the depiction of the verdict by the Foundation's attorneys says it all. On their website, Golenbock Eiseman Assor Bell & Peskoe described the verdict as "an important victory."

Update:  On November 28, the two institutions announced that they had resolved all remaining issues. There will be no appeals. The terms of the agreement were not disclosed, and it is not known whether any adjustments were made in the allocation of the material as made by the Probate Court.