From Champlain to Boissel de Monville, A travel books sale in Paris. 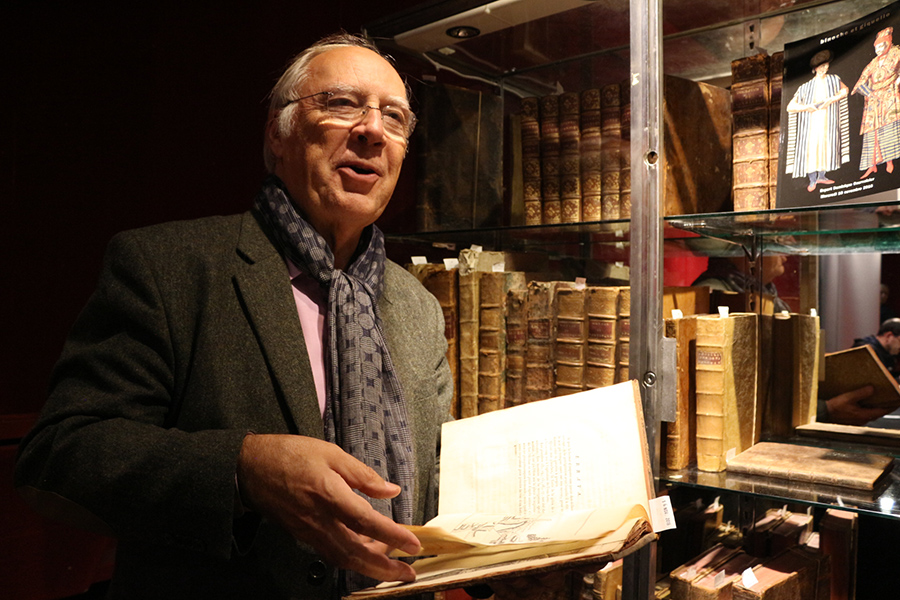 Samuel Champlain was in Paris the other day, and since he had come with his iconic map of New France, many people came to see him. In fact, the showroom at Drouot was overcrowded with various travellers from the past centuries, and with as many booksellers. Rare Book Hub attended the meeting and collected the figures. Welcome on board of the Binoche et Giquello’s sale of November 16, 2016!

Travel books sales are not that many nowadays, especially those made up of a same book collection. “This was a family-owned collection,” confirms Odile Caule from the auction house Binoche et Giquello. “It comes from the castle of Menneval, Eure. Except one: Les Voyages de la Nouvelle France occidentale (Paris, 1632) by Champlain, as stated in the catalogue.” The expectations were not that high despite a very attractive list of books. First, because travel books have greatly suffered from the “old book crisis”—“I wouldn’t say so,” retorts the optimistic Rodolphe Chamonal, who’s been selling travel books for the past 30 years. “The market is sort of stable, now. The problem with this interesting sale is the condition of the books. Many of them need to be restored, and it costs money.” The expert for the sale, Dominique Courvoisier, made it clear from the start: “These books haven’t been properly stored and taken care of. Moisture made their pages crispy, and, at one point, the bindings have been waxed with Baranne, a cheap wax for shoes! The effect on gildings was terrible, and the hinges are quite fragile.”

Yet, castle collections hold a special place in the hearts of collectors, and this one featured a lot of classics—and a few treasures. “We have a handful of them bound in full morocco, like Acuna’s Relation de la rivière des Amazones (Paris, 1682) or Knox’ Relation du voyage de l’île de Ceylan (Paris, 1789). Fortunately, they were stored in another place, and have suffered less,” confesses M. Courvoisier. Travel books in such bindings are very rare—“they were bound for one of the “grands curieux (great curious)”, a group of bibliophilists from the early 18th century, who ordered gorgeous and unusual bindings.” Rodolphe Chamonal states: “These ones will probably go way over the appraisal, and will be bought by some fortunate collectors, who will probably never see another copy of the like in their lives.” Among the other stars of the sale were two copies of Champlain’s historical voyages in North America. The first one (Paris, 1613), relates the second expedition of the French explorer, but it came without the famous map—it was estimated between 20 and 25,000 euros (before the buyer costs of 27%), and it went for 58,540 euros (buyer costs included). The second one (Paris, 1632) regroups all the expeditions of Champlain. It is bound in full vellum, and contains the iconic “general map” of New France (Canada). “In a time when it was necessary for a European country which claimed the ownership of a land to prove that it had explored it, this map drawn by Champlain himself enabled the French to claim the region of Acadia and the valley of the Saint-Laurent River,” reads the catalogue. The huge map, at the crossroad of knowledge and ignorance, is a moving testimony of the time—and a graphic beauty. The appraisal of 100,000 euros was a little bit high, according to M. Chamonal, who reminded us that three copies of Champlain’s book were recently sold in New York—and that book lovers who can afford such a book are not that many. It was nonetheless sold for 124,460 euros. The Acuna, though missing the map of the Amazon River, was sold for 16,510 euros (appraisal 3,000 euros), and the Knox for 15,850 euros.

All booksellers from Paris attended the sale—even the people from Binoche et Giquello seemed surprised. The condition of the books worried M. Courvoisier—“curiously, it did not discourage the buyers,” he said after the sale. Indeed, a manuscript of Le Roman de la rose from the 14th century, though missing a full set of pages, was sold for 63,500 euros, while “one of the nicest books ever published about the Ottoman empire” (catalogue), Nicolay’s Les Quatre premiers livres des navigations... (Lyon, 1568), went for 57,150 euros (appraisal 40 to 50,000 euros); the hand-coloured engravings were gorgeous, indeed, but one of them was missing. On the contrary, the Wytfliet’s Histoire universelle des Indes Occidentales (Douai, 1607) featured all the maps called for, but the frontispiece of the second part was missing—it went for 18,412 euros. “We’re quite happy about this sale,” confesses M. Courvoisier. “We generated 620,000 euros where we didn’t expect more than 430,000.” As a matter of fact, even the off catalogue books, sold separately at the end of the sale, made very good prices. “This I can hardly explain,” says M. Courvoisier. I mean... Most of them were in a very poor condition or incomplete... Yet, they were bought by professional booksellers.” Travel books might have been given up for dead a little bit too fast.

The few unsold books (see below) were returned to the family. Among them was a modest book, which indeed went unnoticed—except by M. Courvoisier. It is always interesting to ask an expert to point out their favourite book in a sale. After all these years, and all these books, they often choose the most peculiar ones. “Take this one,” he says, handing me a copy of Boissel de Monville’s Voyage pittoresque (...) sur une partie du Rhône (Paris, An III-1795). This French traveller did not go to the ends of the Earth to discover some unknown region, he sailed the Rhône River—said to be partly non navigable at the time.” And he joined 17 engravings to his work. “Look at them,” whispers M. Courvoisier. “They are so unusual, so... bizarre. He drew them himself, and his style is unique for the period. And take a look at these sceneries,” he goes on while leafing through the modest book, “you’d bet you’re in the middle of the Wild West... but no, this is the Rhône River!” An untold story, as nobody bought it despite the low starting price of 200 euros.

This sale was interesting because it proved that travel books are still attractive to many, and that “exceptional copies” are not the only ones to reach good prices.

The prices quoted in this article are buyer costs included. We link to the catalogue (PDF) and the results of the sale—forwarded by the auction house. “The numbers which are not listed correspond to the books that did not sell,” underlines Binoche et Giquello.