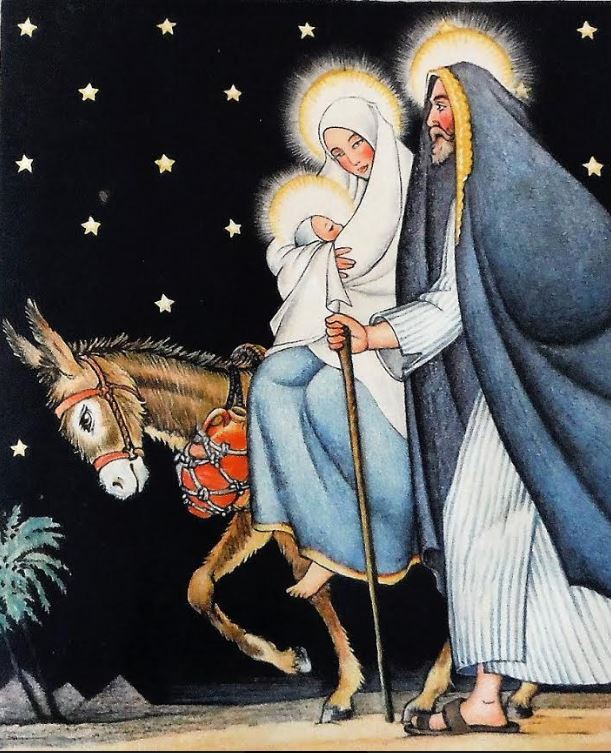 An illustration by the Petershams for the 1st edition of THE CHRIST CHILD published in 1931, one of many collectible holiday books.

Most historians say the creation of a book specially written to be given as a holiday gift started with Charles Dickens. When A Christmas Carol first appeared in 1843 it started a trend of holiday publishing that has continued to the present day. The tale of Scrooge and his visits with the ghost his old partner Jacob Marley and the spirits of Christmas Past, Present and Yet-To-Come came out in a first printing estimated at 6,000 copies. All sources note the care Dickens took with the publication of this volume including selecting the end papers (green) and insisting on hand coloring for the plates. Though these details raised the costs and cut into his profits, it resulted in a beautiful gift book which was an instant best seller. There’s a short interesting video that tells a lot about Dickens and his “invention” of Christmas. Watch it at www.youtube.com/watch?v=MpMoGmlr0Gc&t=427s. Encouraged by the success of A Christmas Carol, Dickens went on to write other holiday offerings. Most of them can be found in digital format including text and illustrations at charlesdickenspage.com/christmas_books.html.

Despite the enduring popularity of A Christmas Carol, recent prices realized at auction for this title have been substantial but not spectacular. RBH records show sales ranging from GBP 1,612 to $7,500. The highest price paid within the last few years was $30,750 in 2014 for a lot containing all the Dickens' Christmas books including a signed copy of A Christmas Carol.

A search for early editions of the title brought up 90 listings priced from a high of $35,000 for a signed first edition to a low of $1,450 for a later 1845 printing. There are many points for the the true first. Besides the green end papers they include four color plates by Leech and four black and white illustrations by Linton, 'Stave I' on page 1. There are many facsimile first editions most of them priced under $100.

An equally enduring part of Christmas reading is the classic poem The Night Before Christmas (A Visit from St. Nicholas) by Clement Moore. It was first published anonymously in the Troy Sentinel in December 1823. The first publication attributed to Moore was in 1837 and in 1844 it was included in a published collection of his poetry. There are countless later editions and many fine illustrated versions. Some of the best known artists who have tried their hand at this holiday favorite are Arthur Rackham, W.W. Denslow, Jessie Wilcox Smith, Tasha Tudor, Robert Sabuda and others. The edition bringing the best price at auction in recent years seems to be Rackham’s published in 1931, especially the signed and numbered copies.

The Night Before Christmas introduced the “right jolly old elf” who eventually became Santa Claus. It was the images created by artist Thomas Nast and published in Harper’s Weekly that have most defined our vision of the man in the red suit who comes in a sleigh bearing gifts. According to the cartoon archives of Ohio State University, “Thomas Nast ‘invented’ the image popularly recognized as Santa Claus. He first drew Santa Claus for the 1862 Christmas season Harper’s Weekly cover and centerfold illustration to memorialize the family sacrifices of the Union during the early and, for the north, darkest days of the Civil War… The modern American celebration of Christmas, with its commercialized gift exchanges, developed in cities, led by New York, after 1880. Nast’s images of Santa Claus were so popular that they were collected and reprinted in a book published in 1890.” cartoons.osu.edu/digital_albums/thomasnast/santa_camp.htm

The RBH records on Nast images of Santa are scanty with only 11 entries. In 2012 a 1874 Harper’s Weekly Santa cover realized $166. A 2007 auction record shows “Santa Claus in Camp” published in Harper’s Weekly Jan. 1863 brought $1,080.  A better selection of antique Nast Santa items, both offered and sold, can be found on eBay where prices are spotty ranging from under $10 for a single piece to over $400 for an 1880 bound volume of Harper’s Weekly containing a full year with multiple Nast items.

When it comes to the spiritual side of Christmas there are too many versions of Nativity to itemize. This writer’s favorite one is The Christ Child from the Gospels according to Matthew and Luke, illustrated by Maud and Miska Petersham and published by Doubleday, Doran & Co. in 1931. A search for first editions brought up 13 copies priced from $20 to $275.

A more secular Christmas favorite arrived in 1939 in the form of Rudolph the Red Nosed Reindeer by Robert L. May. “The most famous reindeer of all” was introduced as a giveaway booklet published by Montgomery Ward. A RBH 2009 auction record describes a first edition of which sold for $510, as “Illustrated in color by Denver Gillen. 10¼x7½" original color illustrated wrappers. First Edition, First Issue …. The name of Rudolph for the shiny-nosed hero of the poem was chosen by May's daughter. The book was distributed as a keepsake to the children of the company's customers. Several years later Johnny Marks (May’s brother-in-law) wrote lyrics based on the poem, and Gene Autry recorded the song, which was to become the second best-selling record of all time.”

Readers, especially young readers, are probably most familiar with Rudolph as a Little Golden Book which first appeared in 1958 illustrated by Richard Scarry. In 2013 the original front cover art for Rudolph by Scarry sold at auction for $8,125 according to RBH records.

Later in the 20th century several popular Christmas stories had their first appearances in magazines. Both A Child’s Christmas in Wales by Dylan Thomas and How the Grinch Stole Christmas by Dr. Seuss appeared in periodicals prior to their publication as books. The Dylan Thomas piece came out in the U.S. in the Dec. 1950 issue of Harper’s Bazaar where it was titled "A Child's Memories of a Christmas in Wales.” In 1952 it was released as a record, followed by a US hardcover edition published by New Directions in 1954. There are other later editions; notably illustrated by Fritz Eichenberg (New Direction 1969) and Edward Ardizzone (UK 1st Dent 1978). Unless signed or inscribed prices for these titles are still fairly modest.

The Grinch first appeared in the December 1957 issue of Redbook and was also published as a book at approximately the same time by Random House. RBH records show a 2014 auction where a first edition of the Grinch with no dust jacket sold for $264. Recent sales on eBay of purported first editions with dust jackets ranged from $89 to over $400.

One of the most popular holiday children’s titles appearing in the late 20th century was The Polar Express, written and illustrated by Chris Van Allsburg and published in 1985 by Houghton Mifflin. The title went on to win a Caldecott Medal in 1986. RBH records show a signed copy of the first edition selling for $1,920 in 2006. The Polar Express became a 2004 movie starring Tom Hanks. There is also a book in a limited edition of 175 copies published in connection with the movie signed by Van Allsburg, Hanks and producer director Robert Zemeckis. A copy recently sold for $1,000 on eBay.

As the 21st century arrived the holiday themed pop-up books of Robert Sabuda became perennial mass market stand outs. These marvels of paper engineering come in multiple sizes and shapes, including miniature and oversized. There are numerous titles such as: A Christmas Alphabet, Twelve Days of Christmas, Night Before Christmas, Winter’s Tale, Retelling the Christmas Story and others. The Sabuda Christmas books began appearing in the mid-1990s and continue to the present day. Prices vary depending on condition and rarity, but all seem to still be widely available and not, as yet, expensive. A Google search brings up a number of YouTube videos illustrating the movable charms of these books that continue the holiday gift book tradition.