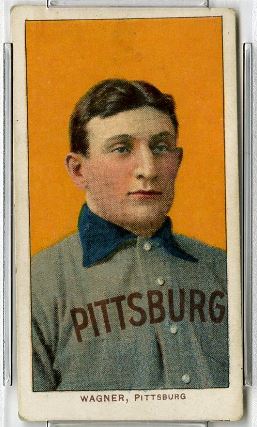 Rising prices in paper ephemera were confirmed once again last month with another new record set for the price of a baseball card. And once again, the honored ballplayer was the man they called "Honus," Johannes Peter "Honus" Wagner. This time the price was $3,120,000. Once again, it was not just any Honus Wagner card, but what is known as a T206 "Jumbo" card issued circa 1909 by Sweet Caporal Cigarettes. Sweet Caporal, on the card's back, claims to be "The Standard For Years." Not, obviously, for cigarettes, but for baseball cards, yes they are.

Honus Wagner was in his seventh season in the major leagues in 1909. Even by then, he was one of the oldest players in baseball. He retired in 1917 at the age of 43. Along the way, Wagner compiled eight batting titles, while also being a consummate slugger, base stealer, and defensive shortstop. It is ironic that Wagner, though being one of the greatest to ever play the game, is better known today for his baseball card than his play. Then again, Wagner himself never made anything like the $3.1 million his card just made. His maximum salary was $10,000.

Only about 200 of these cards were issued by Sweet Caporal. Wagner objected, ordering them to cease and desist. Why he objected is not certain. One explanation is that he was not paid by Sweet Caporal. That would certainly be grounds for an objection, though baseball players were not routinely paid for promoting products in that day. The other possible reason, cited by Wagner's granddaughter, is that Honus did not want to encourage children to smoke. You had to buy cigarettes to get these cards. Wagner was himself a smoker and chewer, but that doesn't mean he would not have objected to promoting tobacco to children. Whatever the reason, printing of the cards was discontinued after a short run. Today, a little over 50 of these cards are known to survive.

However, most are not worth $3.1 million. Along with this being a rare "Jumbo" card (wider margins), it is one of only three Wagner cards with a PSA rating of 5 or greater. Unlike books, with a somewhat vague poor/fair/good/very good/fine scale, baseball cards are rated 1-10. There is one other Wagner card rated 5 and another rated 8. The one rated 8, which might bring more than $3.1 million at auction today, is known as the "Gretzky" card because it was once owned by hockey player Wayne Gretzy. While the Gretzky card is better, it is believed a later owner trimmed the edges to remove some rubbing or curling that would have lowered the rating. Gretzky bought the card in 1991 for $451,000 and sold it in 1995 for $500,000. The Gretzky card was privately sold in 2007 for $2.8 million, previously the highest price paid for a baseball card.

The new record setter, which was sold by sports memorabilia specialist Goldin Auctions, is in the records for at least two previous sales. In 2008, it was sold at auction for $1.62 million. The same card came up again in 2013 and this time was sold for $2.105 million. If nothing else, this recent sale for $3.12 million proves that Honus Wagner and other significant baseball cards make a great investment. Even substantially lesser grades on the Wagner card easily climb well into six figures.

As remarkable as that price is for a baseball card, this one may be even more so. At the same auction, Goldin sold a signed rookie Lebron James basketball card for $318,500. $318,500? This card is barely 13 years old. Lebron is alive and well and can still sign as many more cards as he feels like. Moneyed collectors are evidently alive and well too, and items in the field of collectible works on paper are getting their share of the money, even if sometimes it is non-traditional forms of paper.